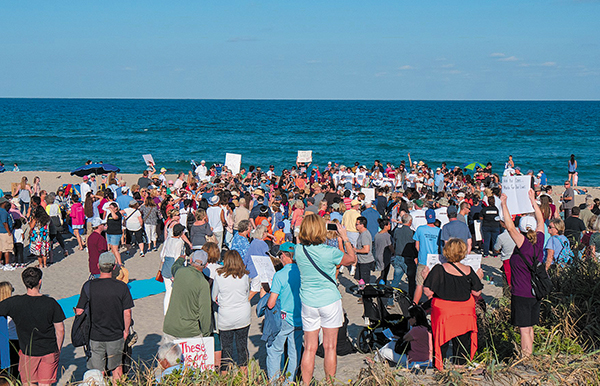 More than 1,000 participants marched from Old School Square to the ocean in Delray Beach on March 24 to call for an end to gun violence. Michele Quigley/The Coastal Star

Three Village Academy students came to the Delray Beach City Commission meeting in early March to plead with elected officials to help them.

“You have a moral obligation to keep us safe,” said Taniyah Evans, 14.

They talked about walking past crime-scene tape on the way to school and waking to the sound of gunshots.

Now, they worry about a possible mass shooting at their school. On Valentine’s Day in nearby Parkland, a former Marjory Stoneman Douglas High student used an assault weapon to kill 17 students and teachers at the school.

“It’s very difficult for us to focus because we are worried if our school is going to be next,” said Rebecca Joseph, a ninth-grader.

The students spoke to a like-minded group of city leaders.

On Feb. 19, Presidents Day, Mayor Cary Glickstein allowed a gun reform rally to be held in front of City Hall. The following Friday, he found himself walking with Atlantic High School students east to Old School Square to support the Stoneman Douglas students.

“We walked 17 times around the football field and they/we just kept walking. It was fun,” he said. “No one knew, including the Police Department, that we were heading to Old School Square. It was a bit dicey crossing Congress and I-95 off and on ramps. I was glad I was there to assist with that.”

He said the walk was “a highlight of my term being around that energy.”

In Florida, city and county elected officials face a 2011 law that forbids them from passing gun laws or risk being removed and fined $5,000.

That’s why Delray Beach and Boynton Beach commissioners unanimously passed resolutions on March 6 asking that the “draconian law” be repealed.

Both resolutions ask for an “outright ban on assault weapons.” They also support raising the age requirement to buy an assault weapon to 21, having universal background checks and a mandatory three-day waiting period, and passing “Red Flag Laws” that allow police to take guns from people who show signs of violence.

Boca Raton passed a resolution “encouraging the United States Congress and Florida Legislature to enact measures to protect school children and our communities from gun violence … which may include enacting reasonable firearms regulations.”

The resolutions were sent to elected officials and delegations on the state and federal levels.

After the Florida legislative session ended, Gov. Rick Scott signed into law the Marjory Stoneman Douglas High School Public Safety Act, which does all the Delray Beach and Boynton Beach resolutions ask except ban the sale of assault rifles.

Hours after Scott signed the law, the National Rifle Association sued, saying the law infringes on the Second Amendment rights of young adults between 18 and 21.

Glickstein, whose term ended March 29, asked fellow commissioners to consider joining the city of Weston when it sues the state to overturn the gun law.

When the law passed in 2011, the city of Tallahassee sued the state because it had gun regulations it was not enforcing. Miramar and Weston joined in the suit because of the personal penalties against elected officials, Cole said. But the judge ruled only on the Tallahassee gun regulations and not on the penalties.

This time, Cole said, they would seek to remove the “draconian penalty that deters cities from passing their own laws.”

The City of Weston sued the state, the governor and the attorney general on April 2 in Leon County, a state court home to Florida’s capital city, Cole said. Nine cities, but none in Palm Beach County, joined Weston in the lawsuit, he said.

He hopes that Boca Raton and Delray Beach will want to be part of the suit.