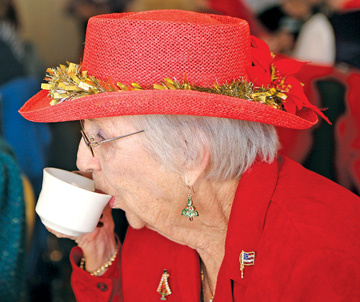 If you believe the Daughters of the American Revolution are a stuck-up bunch of blue-blood snobs, come meet the ladies of the Boca Raton chapter.

And please bring along some toilet bowl cleaner, if you have it.

Her eyes scan the dining room at the Holiday Inn in Highland Beach, where the Estahakee Chapter is gathering on a chilly Monday morning. Johnson is the
chapter’s regent — its president — serving a two-year term.

“Let’s see,” she begins. “We have one lady who was a driver for UPS. A dental hygienist. A professional singer. A high school teacher. We have Democrats and
Republicans and Independents.”

This is the December meeting, so the ladies are stressing the red in their red, white and blue. About 60 of the chapter’s 147 members are present, and nearly
all have found something holly-berry red to wear. Red dresses, red hats, red
sweaters. They make a warm and cheerful group, more red-blooded than blue.

“But the biggest misconception about D.A.R.,” Johnson concedes, “is that we’re a bunch of ladies who drink tea and do nothing.” She is perturbed. “We’re a
patriotic service organization!”

Every year, according to the national headquarters in Washington, D.C., those members volunteer 60,000 hours to patients in veterans’ hospitals, and donate $150,000
in scholarships and financial aid to students.

“Our priorities are historic preservation, education and patriotism,” Johnson explains. “We call it H.E.P.”

The meeting begins promptly at 11 a.m. with the Pledge of Allegiance, of course. Then Mary Allen, the professional singer, leads a heartfelt God Bless America.

Today, Barbara Gualtieri of Boca Raton will become a Daughter.

“It was my daughter’s idea,” she says. “I always knew I was eligible, but then we met some D.A.R. ladies in Houston, and she said, ‘This is a good idea.’ ”

The only requirements for D.A.R. membership are that a woman be 18 or older and prove lineal descent from a patriot of the American Revolution.

“Some do their own research, and others need a lot of help,” says Johnson, who has taken a genealogy course to assist prospective members.

The application is then sent to Washington, where the national headquarters is the final arbiter, usually responding in six to eight weeks.

Washington has confirmed that Gualtieri is indeed a descendant of Andrew Feaster, who served in a South Carolina militia. She stands before the group and swears to
uphold the Constitution and respect the flag. A prayer of thanks is offered,
and she is applauded. A new Daughter has arrived.

And now an old Daughter is honored.

Laurajean Rood, 92, of Boca Raton has been in the D.A.R. for 70 years. She comes forward, receives a certificate, basks in applause.

“We’ve done a lot of good,” she says. “We made a booklet to help train new citizens, and I’ve met a lot of nice people.”

But she’s not the longest-serving Daughter.

Seated beside her is Betty-Jane Lee of Boynton Beach, a Daughter of the American Revolution for 71 of her 90 years.

“I believe in educating children about our early history,” she says. “I shudder when I see Jay Leno interviewing people on the street and they don’t know the
history they should know. I believe in what D.A.R. does.”

Organized on May 8, 1961, the Estahakee Chapter takes its name from a Seminole Indian word meaning “beautiful scene,” and so Native American history is a priority.

At today’s gathering, Opal Spencer of its American Indian Committee delivers a brief account of the first known European contact with Florida’s first
residents, 500 years ago.

And then the ladies consider — well, toilet bowl cleaner.

Terry Shelton-Welsh of the chapter’s Service For Vets committee has distributed a detailed schedule of donations needed through April. She wants brooms and
mops, shampoo, hand soap, buckets and toilet bowl cleaner.

“You bring them in, and I’ll deliver them to the V.A. Hospital for their homeless women vets program,” she promises.

In October, the ladies showed up at the dedication of a Habitat For Humanity house to present the new owners with an American flag.

On Veterans Day, they were at the Boca Raton cemetery.

In September, they donated $1,000 to “Paws For Patriots,” which trains guide dogs for soldiers blinded in combat.

On the table as you enter the meeting are pocket-sized copies of the U.S. Constitution.

The Daughters of the American Revolutions would be pleased if you took one.

And they’d be even happier if you read it. 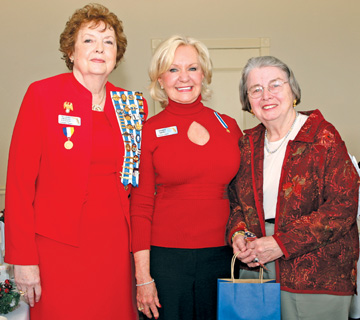 Melinda Swango Johnson (left), Sydney Hayes and Barbara Scifers
Gualtieri celebrate Gualtieri’s swearing in as new member of
the D.A.R.Seated beside her is Betty-Jane Lee of Boynton Beach,
a Daughter of the American Revolution for 71 of her 90 years.