with a concrete cruise along the old road 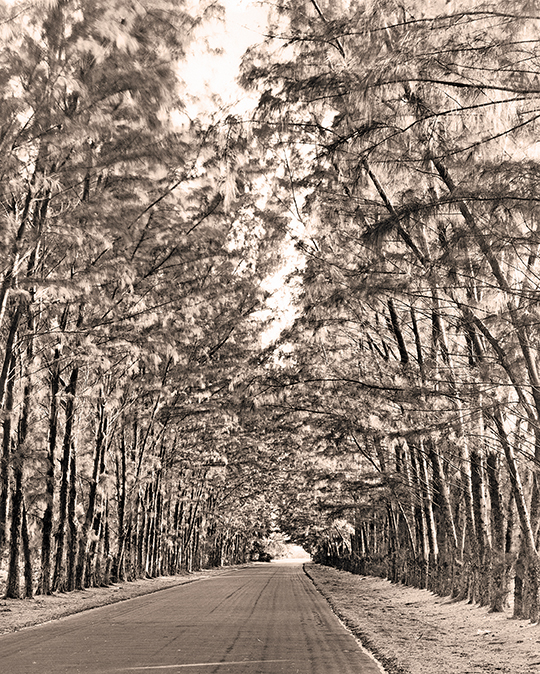 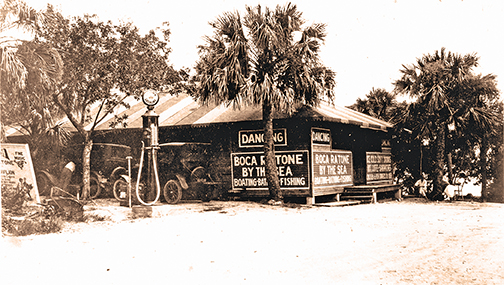 Boca Ratone by the Sea, a 1923 gas station/dance hall/ fish camp on A1A where the Beach Club is today.

“There’s somethin’ about this Sunday
It’s a most peculiar gray
Strollin’ down the avenue
That’s known as A1A.”
— from Jimmy Buffet’s
Trying to Reason with Hurricane Season

That avenue, that celebrated highway, was begun — one significant portion of it, anyway — the same year the original Palm Beach County Courthouse was built; the same year the Prohibition Party’s Sidney Johnston Catts was elected governor of Florida; the same year the infamous Rice Gang robbed the Bank of Homestead and fled into the Everglades with its purloined $6,500.
The year was 1916. The highway came to be known as State Road A1A.

Overall, A1A stretches 328.9 miles, from the Georgia line down to Key West, some of it still hugging the coastline. In Palm Beach County — carved from Dade County in 1909 — an early segment of the road threaded across the inlets at Jupiter, Boynton Beach and Boca Raton.
Through the years, the meandering highway inspired a picture-postcard portrait of Florida, sunlight winking on waves, palm fronds lending their tattered-umbrella of shade. In that way, A1A acquired a romantic cast: It was the road to golden beaches, to year-round summer and suntan, to tourist paradise.
A1A’s 1916 debut was marked by celebration. 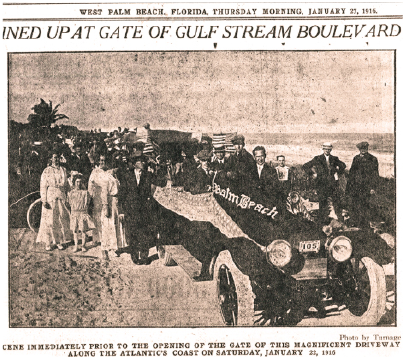 1916: A clipping from The Palm Beach Post depicts the opening of what became A1A in January 1916.

Photos courtesy of the Historical Society of Palm Beach County

In the Reading Room of the 1916 Palm Beach County Courthouse, home to the Historical Society of Palm Beach County, Nick Golubov lays down a thin file folder of newspaper clippings from the highway’s earliest years.
“Three Mile Parade Celebrates Opening Gulf Stream Boulevard,” screamed a Jan. 23, 1916, headline. “Greatest Gathering of Automobiles ever Seen in this County … With Every Participant Very Enthusiastic.”
Those very enthusiastic participants were asked to gather on Royal Palm Way in Palm Beach at 2:30 in the afternoon — an assembly attended by mayors, assorted dignitaries and anyone else who cared to witness highway history.
One witness to highway history was Dr. Peter Barrett, who, as a 6-year-old boy in 1940, watched a road crew at work, extending A1A southward. The doctor’s recollection is contained in A History of Boca Raton by Sally J. Ling. After the end of WWI, Ling writes, a trio of elections were held to form a Special Road and Bridge District to finance the extension of Ocean Boulevard (farther east at the time and not yet called A1A) to Boca Raton. The westward move is described by Barrett, whose family then lived in Boca Raton Villas on A1A, just across from Lake Boca Raton.
Barrett described a road gang of convicts digging and shoveling “right at the front of our property” and recalled “ambling out to talk with them, curious about their interesting clothes. ...They were friendly, and on at least one occasion, I had lunch with them, sitting on a wheelbarrow.”
His parents didn’t approve of his new friends and nixed further socializing. And so, Barrett noted, “The roadwork activity moved slowly along to the south. No bulldozers or trucks. Just picks and shovels and men in striped clothes.”
Just north of Boca Raton, Highland Beach is a three-mile stretch of A1A. Its first homes were mostly rentals but in 1949, as the town’s website notes, 21 voting residents created the one-half-square-mile Town of Highland Beach as a water district and as protection of their lifestyle.
The town had salt water intrusion in its wells and an inability to contract with neighboring towns for fresh water, so the residents raised money to build a water plant.
By then, the highway was dubbed A1A, earning its “A” designation in 1946 to avoid confusion with its more prosaic alternative, Route 1. 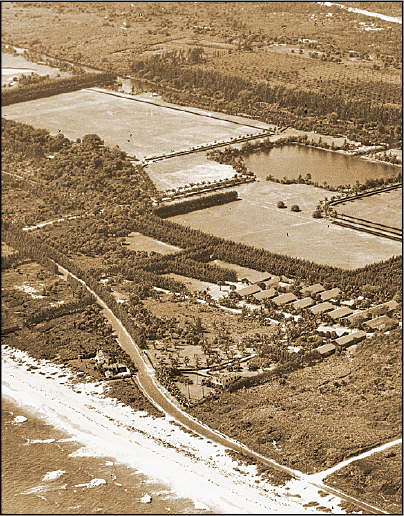 You can see the old polo fields at Gulf Stream at the center of this photo. 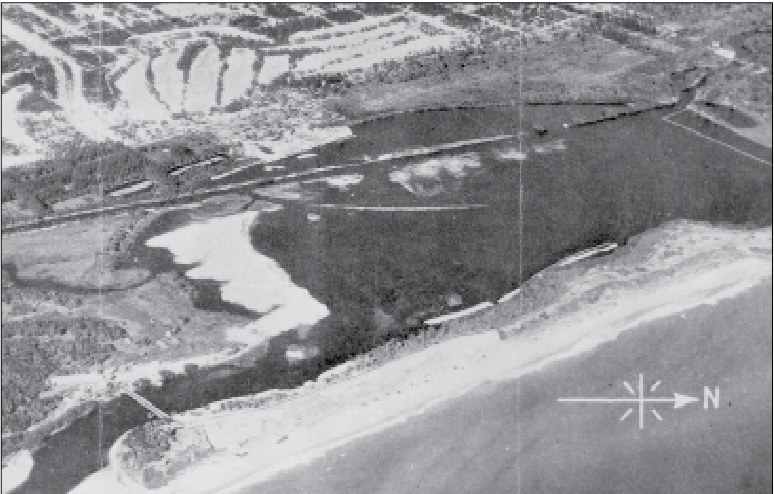 1926: At the time, the recent dredging of the Intracoastal Waterway left mounds of spoil in the middle of Lake Boca Raton. The Cloisters Inn, later to become the Boca Raton Hotel and Club, was in its infancy, as was the first bridge across the inlet.

Changing times, names
Roads have a way of shifting names, and State Road A1A is no exception. What is Gulf Stream Boulevard here is Ocean Boulevard there, South Roosevelt Boulevard elsewhere, Collins Avenue or County Road (North and South) somewhere else, and so on, switching monikers as it switches towns and counties.
Over the years, A1A would experience legal battles over its ownership, storm-tossed waves crumbling sections of its pavement and development encroaching along its length. The roadway changed.
The sites (and sights) it passes have changed, too. Much of the jungle-like vegetation that once lined the roadway has given way to shopping centers and gated communities, restaurants and retailers and resorts. 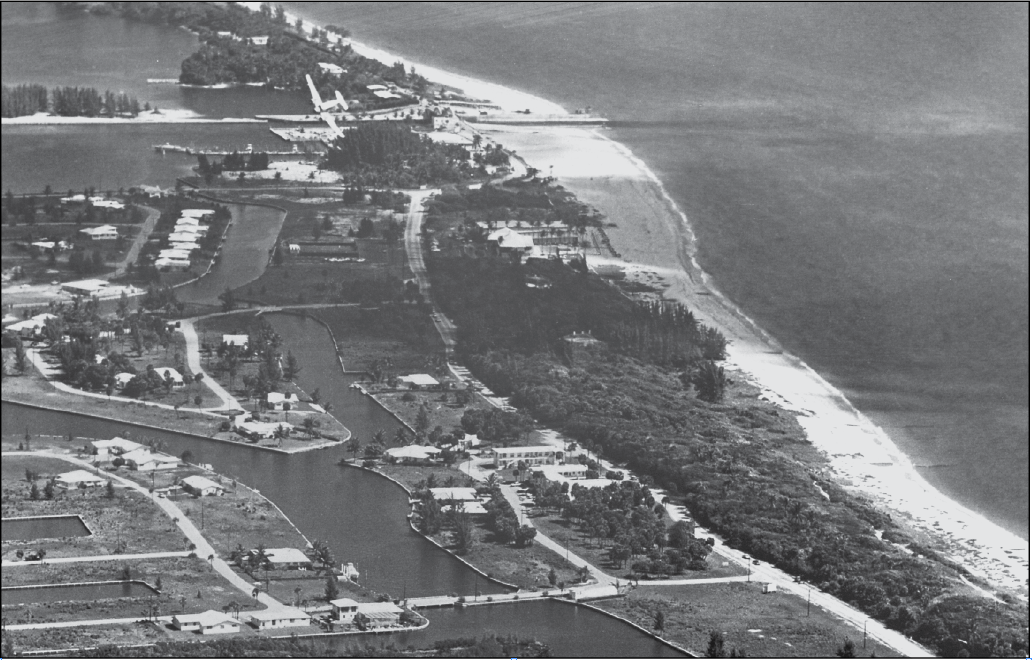 1963: By this time A1A , seen here at the Boynton Inlet, had become the main street

running through Ocean Ridge, Manalapan and other coastal towns.

Courtesy of the Ocean Club of Florida

One thing that hasn’t changed: the stately Australian pine canopy along A1A through the town of Gulf Stream, designated a historic and scenic highway, allowing the town to protect the trees — considered pests in most areas — and even plant new ones.
“The state wanted to cut them down,” says Palm Beach County historian and author Ginger Pedersen, driving north along A1A.
A most knowledgeable guide, Pedersen has a great love for the state’s history. Friend and fellow historian Janet DeVries — in the back seat for this tour — co-wrote with Pedersen Legendary Locals of West Palm Beach and Pioneering Palm Beach: The Deweys and the South Florida Frontier.
The two women know this route, its zigs and zags. In areas where waves gobbled the shoreline, they know where A1A underwent westward rerouting.
“In Briny, parts of the original highway were closer to the water,” Pedersen says, turning east into the gleaming white mobile home community. “The original pieces of highway are under, maybe, five feet of water. This was originally the Shore Acres dairy, owned by Ward Miller. He had it here because you have fewer tick and fly problems if you’re close to the ocean.”
She heads north along Old Ocean Boulevard, where a portion of the original highway still hugs the sea. Just a tad farther, in Ocean Ridge, DeVries gestures to the site where the old wooden Boynton Beach Hotel sat until the 1926 Hurricane washed it into history.
And there, she says, not far beyond it, is Anna Street, named for one of Major Nathan Boynton’s daughters. 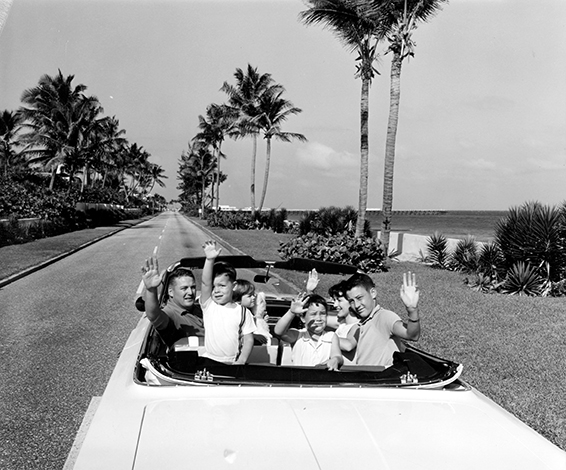 1960s: A family stops along A1A in Palm Beach. In the distance, the Palm Beach Pier is visible.

Time travel
To travel State Road A1A is to travel back in time, to revisit Old Florida — the good and the bad of it.
“The Chillingworth house would’ve been here,” Pedersen says, motoring through Manalapan and offering a short version of the long, tangled tale of Judge Curtis Chillingworth and his wife, Marjorie, murdered in 1955 by two hit men. Judge Joseph Peel, known to take payoffs and sell protection to racketeers, served life in prison as an accessory to those murders.
Just past the Dune Deck (“One of the last places you can dine on the water,” DeVries says), just past the rubble heap that once was The Hawaiian Inn motel, soon to be a condo, Pedersen jogs right, then left, onto a block-long private road.
“This is one of the few places left of Old A1A,” she says, cruising slowly past the few remaining houses, one with musical notes painted on a window.
Over its century-long existence, A1A has ducked and dodged, erosion chasing it west here and there.
Pedersen and DeVries point out landmarks:
• The old Lake Worth Casino (“The original road was right here and headed straight north,” Pedersen says. “It’s been renovated to look as it did in the ’20s.”);
• The Little Red Schoolhouse (DeVries: It was moved to Phipps Ocean Park from Palm Beach);
• A sliver of Old South Ocean beach with a steep drop-off, just before Phipps Ocean Park, where an offshore dredge is engaged in beach restoration (Pedersen: “You’d be surprised what you can find. Sharks’ teeth. Shards of Indian pottery. They dig up all kinds of stuff.”)
In Palm Beach, beyond Mar-a-Lago, just past Charley’s Crab, Pedersen says, “I’m assuming that right around here was the original stretch. The decision would’ve had to be the county commissioners’, anticipating what was to come.”
DeVries adds: “That was the era they were calling the Good Roads Era.”
The vaunted roadway continues north from here, of course, but this was its beginning, and this is where Pedersen concludes her tour, turns around and heads south again.
“Who knows how many more generations will get to take this ride,” DeVries says.
Nostalgia hangs in the silence. This old highway has seen a lot of history.
Happy 100th birthday, A1A.