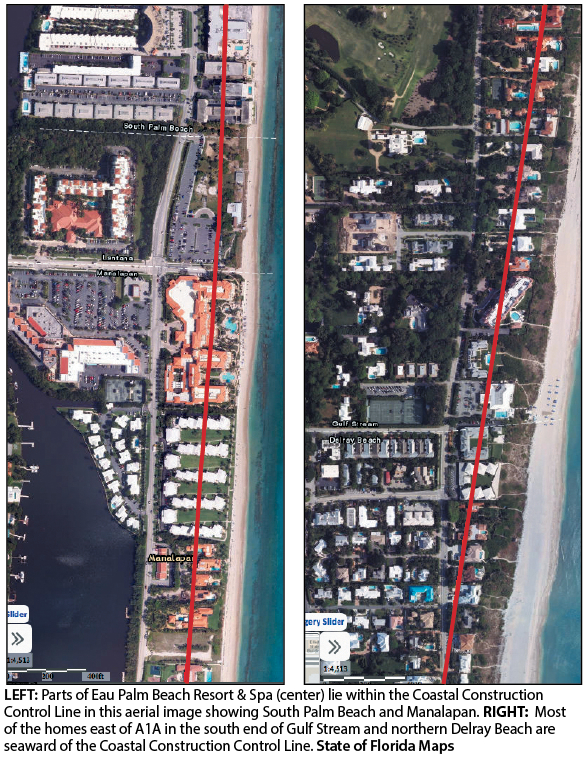 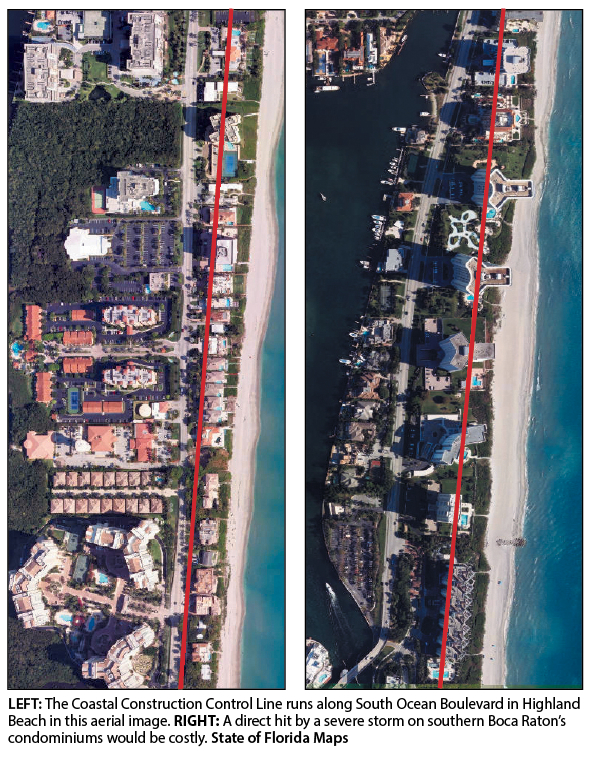 By Jane Smith and Michelle Quigley

If a major hurricane were to hit the barrier island in southern Palm Beach County, $6.4 billion in mansions and condos sitting east of A1A would likely be damaged or destroyed.
Would the property owners be allowed to rebuild?
Yes, if the past is an indication.
The state has OK’d nearly all applications to build seaward of what is called the Coastal Construction Control Line in the past 10 years, according to a local spokeswoman for the Florida Department of Environmental Protection.
The mansions and condos, including sea walls and swimming pools, lie perilously close to the ocean. Some of the pools and sea walls washed away in October 2012 when Hurricane Sandy brushed the South Florida coast.
“This is criminal,” said Harold Wanless, professor and department chairman of geological sciences at the University of Miami. “Someone should be brought up on charges because it affects the health, safety and welfare of citizens.”
Why are these applications approved? In Florida, property rights are highly regarded.
The only time a person is guaranteed a 12-person jury is when the government wants to take your life — or your property. The state Legislature passed the Bert J. Harris Act in 1995, strengthening a property owner’s rights. The act, toughened in 2015, reads that local governments must prove that not allowing owners to use their property would be in the public’s interest.
But Wanless and other scientists, concerned about rising sea levels and increased predictions for stronger storms, think the state is being shortsighted.
“The state should be looking out 50 or more years,” Wanless said. “The sea level will rise by about 2 feet by 2048.
“Most of Florida’s coasts will be lost to sea level rise,” he continued, pointing to the January report on “Global and Sea Level Rise Scenarios for the United States.”
The National Oceanic and Atmospheric Administration produced the report from the work of leading government scientists, including William Sweet, an oceanographer at NOAA’s Center for Operational Oceanographic Products and Services, and Jayantha Obeysekera, the chief modeler at the South Florida Water Management District.
Wanless said the state should stop approving structures seaward of the line and have the line consider the effects of sea level rise.

State laws lack enforcement
In 1971, state legislators created the Coastal Construction Setback Line, which banned construction seaward of the line. That was altered in 1978 to become the Coastal Construction Control Line, which does not prohibit such construction but puts the buildings under increased review.
The CCCL is set on a county-by-county basis. Palm Beach County’s line was last reset in 1997. The line is supposed to preserve and protect beaches from badly designed construction that can harm the beach-dune system, speed up the rate of erosion, endanger adjacent properties or interfere with public beach access.
The state DEP leaves it up to the cities to determine how their coastlines will be used, said spokeswoman Dee Ann Miller.
South County municipalities, though, are leaving that decision up to the state — concerned they may be denying property owners their rights to use the land to the fullest.
Wanless said, “The DEP and the state make the laws and should be responsible for their implementation.”

Lifestyle worth the risk
Manalapan residents Don Silpe and his wife, Linda, don’t worry about sea level rise. At their stage in life, they know they won’t be around to see its effects.
Instead, they worry about a strong storm, a Category 3 or higher hurricane, destroying their 1940s house, where they have lived for the past 30 years.
“If we lose this house to a strong hurricane, we are choosing to do so,” Linda Silpe said. “We are going into it with our eyes wide open, knowing we could not rebuild as close to the ocean as the home is. It would have to be set back.”
They don’t have windstorm insurance but they do carry flood insurance.
Their oceanfront compound is named Ariel, after the spirit in Shakespeare’s play The Tempest.
The main house has more than 3,600 square feet, facing the ocean. Tennis courts and a swimming pool sit on the west side of the 1.63-acre property.
“I like the sense of timelessness, that you are just a grain of sand and the ocean goes on forever,” said Linda Silpe on a hot August afternoon when the ocean breeze made it comfortable to sit outside on the deck.
Her husband pointed out the pluses of living next to the ocean: sea turtle nests every 4 feet, reefs for snorkeling, ocean breeze in the heat of the day and few people walking along the stretch of the beach in front of their home.
He proudly showed the “400 or 500 pictures of sunrises” on his mobile phone, all taken from his deck.
“I grew up near the water and have an affinity for it,” Don Silpe said. “Being here is a way of life.”

A building too far

In southern Ocean Ridge, beach-walkers talk about the new multistory duplex going up on the former site of a single-story hotel at 5001 Old Ocean Blvd.
“If a building had not already existed on Old Ocean Boulevard with an existing sea wall, the new building would not have been approved,” said Geoff Pugh, mayor of Ocean Ridge. “It extends too far out.”
Sea turtle monitor Joan Lorne says the sea wall is too high and leads to false crawls. Those occur when the turtles crawl up on the beach, hit the sea wall and then retreat into the ocean before laying eggs.
Her daughter, Jackie Kingston, holds the sea turtle monitoring permit from Florida’s Fish and Wildlife Conservation Commission. Her group of five, called Sea Turtle Adventurers, counts turtle nests daily in southern Ocean Ridge, Briny Breezes and Gulf Stream.
At the Old Ocean site, the number of sea turtle nests and false crawls are the same as last year: five for each category, Kingston said in late August.

Property rights prevail
Local governments can’t just deny property owners the right to build near the ocean if the state allows it, Pugh said.
“Just to say, ‘sea level rise’ would not be enough,” he said.
Citizens Property Insurance, the insurer of last resort, had 684 policies in southern Palm Beach County as of June 30, according to its spokesman. The policies insure structures east of A1A. Homeowners with mortgages are required to have windstorm coverage.
Citizens caps windstorm property damage claims at $700,000 for personal policies and $1 million for commercial policies, spokesman Michael Peltier said.
Boca Raton had the highest number, with 170 personal policies and 25 commercial policies. Commercial policies cover apartment buildings and condo associations, Peltier said.
The county’s southernmost city passed its own coastal construction setback in 1981. With that resolution, Boca Raton reviews the oceanfront projects after they receive their state permits.
One test may come as soon as November. An ultramodern, four-story duplex is planned for 2600 N. Ocean Blvd. The proposed 14,270-square-foot building has a nearly all-glass front facing the ocean.
The city’s environmental consultant returned its draft report in mid-August, said Boca Raton spokeswoman Chrissy Gibson.
The draft report said the project did not do enough to keep its lights from shining on the beach and disturbing nesting sea turtles, the dune vegetation study lacks sufficient detail to determine whether it addresses all on-site vegetative impacts and the proposed dune walkover structure extends out into the active beach and turtle-nesting zones. All three violate the city’s codes.
The results will make it onto the city’s Environmental Advisory Board agenda within 30 days. The board’s recommendation makes it to the Boca Raton City Council agenda within 30 days. The City Council has the final say.
Because of sea turtle nesting, the state requires a tinted glass or a film that allows 45 percent or less light to filter through the windows and doors facing the ocean and on the sides of the building.
“Any development on the beach affects the sea turtles,” said Kirt Rusenko, who leads a group of eight to monitor Boca Raton’s beaches during the nesting season. Rusenko is the marine conservationist at the Gumbo Limbo Nature Center in Boca Raton. 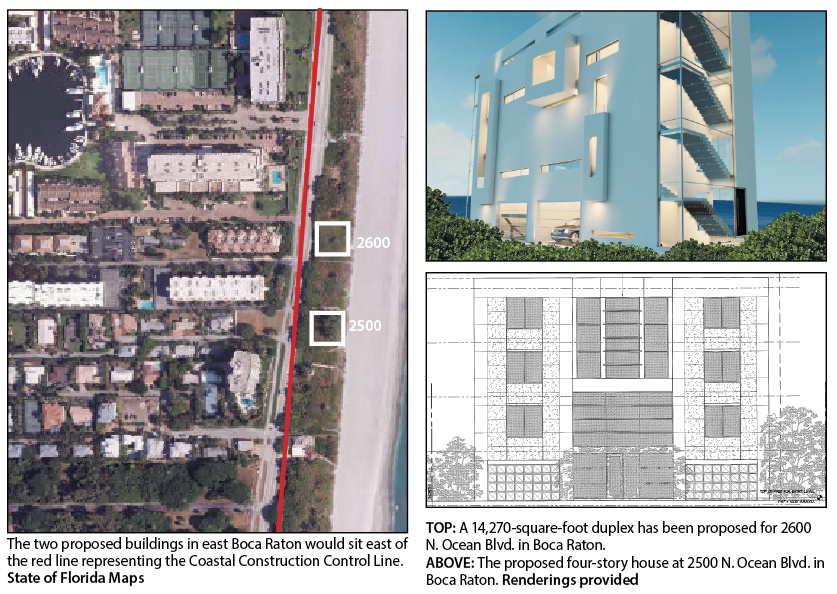 No holding back the tide
A volunteer group, led by barrier island resident Jessica Gray, is trying to stop coastal construction in Boca Raton.
She formed Boca Save Our Beaches in December 2015, right after the City Council gave a variance to allow a property owner to build a four-story, 10,270-square-foot mansion at 2500 N. Ocean Blvd. on a lot less than 100 feet wide.
During that December 2015 meeting, the owner’s attorney hinted at possibly suing Boca Raton if the council denied the variance.
“If you deprive the property owner of all use,” said attorney Charles Siemon, “you must pay the property owner.”
Boca Raton is waiting for the owner to provide an updated environmental assessment to send it out for review, Gibson said.
Gray and others in her group fear the 2500 and 2600 Ocean projects would change the face of the beach, disorient nesting sea turtles and lead to more development along the beach.
In late July, she opened a GoFundMe.com campaign with the goal of raising $5,000. As of late August, she had collected $4,000.
“Attorneys are expensive,” Gray said.
All this turmoil could be avoided, said Keren Bolter, adjunct geosciences professor at Florida Atlantic University.
Five years ago, she wrote a scholarly paper on the state’s Coastal Construction Control Line. The research behind the line’s establishment was sound, she wrote.  But the practice of allowing most structures to be built seaward of it does not “protect the public and the environment.”
Her paper ended with this question: “What is the point of drawing a line in the sand if there is no line drawn to restrict people from building beyond it?” 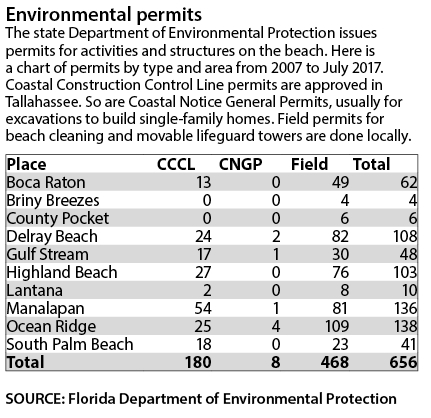 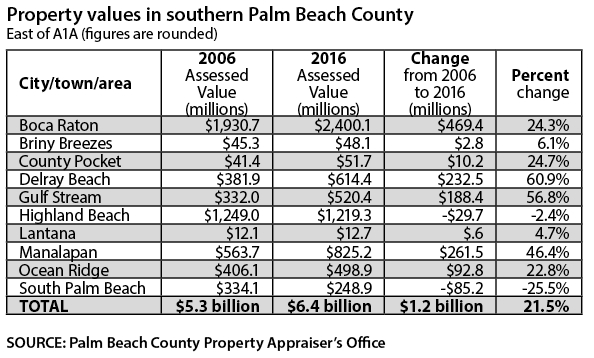