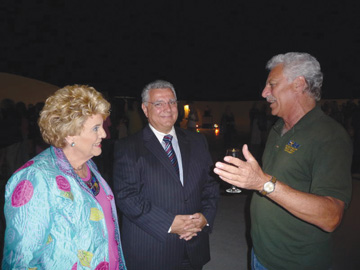 Once known as sleepy Delray, it now seems like the town that never sleeps. A couple of months ago we had Savor The Avenue, with diners at “long tables” down the middle of Atlantic Avenue. Then the Delray Beach Film Festival — the little festival that could, and perhaps the only film festival to feature a beach cleanup.

As usual, the Delray Affair drew more than a quarter-million the weekend after Easter. Then a week later, Circle on the Square offered Martinis & Motown at Old School Square.

And on May 21, Atlantic Avenue will be transformed into an outdoor lounge, South Beach style, for Chillounge Night, sponsored by Cointreau, with food vendors, samba parade, fashion show and live music to raise money for children’s music education in South Florida through Nat King Cole Generation Hope, Inc .Tickets are $15 ($75 for VIP) at www.chilloungenight.com.

So it makes sense that the Palm Beach International Film Festival might seek a little resuscitation by moving its opening night to Delray. When Cinemark Palace in Boca Raton decided not to host the festival premiere, Princess Ka’iulani, siblings Glenn and Brad Gray and Rochelle Walters stepped in and offered to screen it at their Movies at Delray at no charge.

After the screening, guests headed back to town to join a few hundred more fans for an opening night party on the top deck of the parking garage at Worthing Place, a spanking new seven-story, 217-unit luxury rental complex. The party featured sliders and tapas from David Manero’s nearby Vic & Angelo’s and The Office, beer and booze, as well as antique and luxury car displays.

Of course, no festival is complete without bright lights and cameras, still and video, to focus on celebs old and new, such as Rob Van Winkle, aka Vanilla Ice, who arrived in one of the featured Rolls Royces; the still stunning Jo Ann Pflug who starred as Lt. Dish in M*A*S*H way back in 1970; and the “biggest” (literally) new star, The Blind Side’s Quinton Aaron.

This year’s festival had a reduced film lineup, no gala and no contribution to support local student filmmakers. In its previous 14 years, the festival contributed $1 million that helped 30,000 students train in filmmaking, but before the projector rolled, Aaronson said it will make no contribution this year.

“We’ve scaled back, just like every other business,” he said, acknowledging a dim present and darker future. “But we’ll keep going as best we can. The show must go on.”

By contrast, Florida Stage is saying farewell to Manalapan, but the future couldn’t be brighter. After almost 20 years in Plaza del Mar, it’s leaving with a bang, not a whimper. Before heading to its new home in the Kravis Center’s Rinker Playhouse, it’ll offer one more delicious opening night — May 14 — for When the Sun Shone Brighter, by Christopher Demos-Brown.

It’s the story — fictional, of course — of a charismatic Cuban-American mayor of Miami who decides to run for the Senate. Sex, lies and ambition complicate things. Tony nominee John Herrera (The Mystery of Edwin Drood) stars.

Outside the auditorium, patrons will be able to take in a new exhibition by internationally renowned photographer Barry Seidman. Titled Art-chi-textures, it features shots taken during a visit to the northern latitudes. The photos and the play run through June 20.

Seidman will mount a new exhibit titled Multiple Sins at Lighthouse Center for the Arts in Tequesta, opening June 10. Florida Stage will debut at the Kravis Center with a raucous, bawdy, good-time summer show, Low Down Dirty Blues, opening in previews July 17.

Giving back. When the real estate market soured, Jay Bernhardt took an unusual approach with a building that he couldn’t rent in downtown Lake Worth. He gave it away, sort of. He lent the space to a group of area artists and artisans, who otherwise might have been shut out, to showcase their work. On May 7, Class Glass Metal Stone Gallery at 605 Lake Ave., will celebrate its first anniversary. Bernhardt will be there, and gallery manager Joyce Brown, and of course dozens of artists who’ll celebrate with a cake and mimosas.

And one more thing: butterflies. Dozens of living butterflies will be released into the community, and butterfly art will be displayed by Karen McGovern from Loxahatchee. When she’s not working with arty lepidopterae, Karen and hubby Paul are zoologists who rescue and breed rare species for release back into the wild.

The artists at CGMS believe in giving back. When Haiti was hit by the recent earthquake, Brown quickly organized a relief project, the Haitian Empty Vessel, and asked her artists to fire ceramic bowls that customers could buy for $25 each (four for $80) and that were used to sample foods provided by 17 Lake Worth restaurants.

More than 60 artists participated, plus art students at Jupiter High School, contributing more than 500 bowls. “We sold about 200 bowls,” Brown said, “150 of them to people who’d never been to Lake Worth before and raised $4,800. It was a great start, and we’ll probably do it again next year.”

Suite 225 sushi house in Lantana has followed its Kyoto (Delray, West Boca) siblings to the restaurant graveyard. But onetime manager Dak Kerprich, has other ideas. Last fall, Kerprich, who had moved on to other ventures years ago, opened Pizza Oceana half a block west of Suite 225. Now he’s looking to bring his classy pies to Lake Worth, “just across from Bamboo Room,” he says.

Speaking of Bamboo Room, Lake Worth’s lamented live music club closed two years ago this month. But it isn’t permanent, promises owner Russ Hibbard: “We’ll reopen when the economy’s a little better. I haven’t abandoned it. In fact, we’ve used the opportunity to fix some things and make it better. It’s just a matter of time.”

“Readers digest” has a new meaning at the Boynton Beach Public Library. Visitors can now roam the stacks and then enjoy a snack at the Sailfish Cafe, nestled into a corner of the new 28,000-square-foot north wing. Caterer Jim Gilbeault, owner of Culinary Solutions, offers an assortment of sandwiches, salads, soups, soft drinks, pastries, coffee, tea and treats. It’s open 9 a.m. to 6:30 p.m., Monday through Thursday, and 9 a.m. to 4 p.m. on Saturdays. The library is closed Fridays and Sundays.