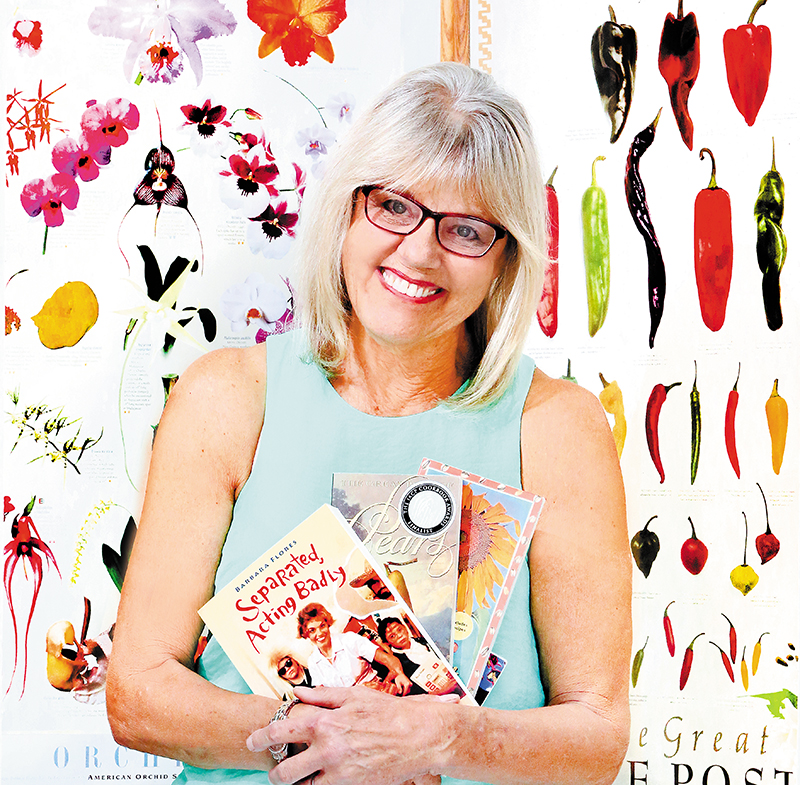 Barbara Flores, a designer and author, stands in front of two of her poster creations and holds copies of her four books, including a memoir about her marriage breakup. Tim Stepien/The Coastal Star

It was about the time Barbara Flores had her third book published that she decided she needed to learn how to write.

Flores, a 71-year-old South Palm Beach resident who in 2019 published her memoir Separated, Acting Badly to positive reviews, produced a book of quotes for Al-Anon families and two cookbooks before actually making the time and effort required to consider herself an accomplished writer.

“I started out as a graphic designer, and getting the design right was actually more important to me than what the book had to say,” she said.

When her third book, The Great Book of Pears, became a finalist for the International Association of Culinary Professionals Cookbook Award in 2001, she decided to take a different tack.

“That was what I call my big-ass award,” she said. “That was when I decided to get interested in writing. I didn’t even call myself a writer then. I really wanted to design more than write.”

Living in the Bay Area, Flores started by taking writing classes from Adair Lara, a columnist with the San Francisco Chronicle.

“I took so many of her classes she got sick of me, but we became writing partners, so everything she wrote for the Chronicle she sent me, and all the crap I wrote I sent her. We had to write a column every day, and I got very good very fast, and that’s when I had the thought of writing a memoir.”

Her plan was to catalogue the ups and downs of her marriage, which had lasted more than 30 years, but it was about that time her husband had an affair with a younger woman and left her.

“So, there goes the book idea, but then people said why not write about the experience of him leaving, so that’s what I did.”

That was in 2004, and in 2006 she decided to leave the Bay Area to join her parents in South Palm Beach. After years of grieving over the failed marriage and many stops and starts, she wrapped up the manuscript last year.

“We had a very long separation before we got the divorce, so that’s the ‘separated’ part, and the ‘acting badly’ part is me acting badly,” she said.

Flores, who has married again — to artist George Canberg — has spent many years as a teacher, first at an inner-city school in Oakland and more recently at G-Star School of the Arts in the village of Palm Springs. That background contributed to her latest manuscript, a work of fiction involving guns. The book is intended for ages 11-13.

Q: Where did you grow up and go to school? How do you think that has influenced you?
A: I grew up in a village, yes a real village, called Menomonee Falls outside of Milwaukee, Wisconsin. I wanted to leave as fast as I could. I wanted to see the world, the ocean. I wanted notoriety as an artist. I already won awards in high school and college — my artwork sold — and I grew too big and too bigheaded for my small hometown. Now I really appreciate the people. They’re so kind, friendly, soft-spoken … just don’t schedule anything during a Packers game.

Q: What professions have you worked in? What professional accomplishments are you most proud of?
A: My career as an artist/writer/teacher has been a see-saw of peaks and valleys. My writing mentor, Adair Lara, a former San Francisco Chronicle columnist, has called me a serial enthusiast. In college in Madison, Wisconsin, I began illustrating shoes like Andy Warhol did. By the time I was 22 my illustrations for Nunn Bush shoes were appearing in Playboy and GQ. That gig allowed me to buy a small starter cottage in the Bay Area. I raised three kids in the ’80s and when the youngest was 2 I decided to quit my job as a magazine art director to be home with them and do volunteer work for the war-torn refugees flooding into the Bay Area.
I founded a work program called Manos with grants. But I was broke and had to ask my husband for a food allowance to feed the kids. After five years, my graphic design work picked up and I opened a graphic design studio in Berkeley.

One of my good friends from church was the mother of Mark Miller, the Coyote Café chef. She had a wacko idea that I should fly to New Mexico the day after Christmas and talk to him about designing a chile poster. This was in 1990 when no one had even heard of a jalapeño or a chipotle. It launched a 12-year career of designing food posters and authoring cookbooks for TenSpeed Press.
After my husband, whom I had adored, left after 31 years of marriage, I needed something more in my life. I decided I wanted to write more than I wanted to design. I published essays and took a job teaching writing to inner-city kids in Oakland. I moved to Florida and taught at G-Star School of the Arts.

At age 60 I got a degree in writing and literature at Bennington College, Vermont. I’ve been honored to teach at U.C. Berkeley Extension, Moraga College and Palm Beach Atlantic University.

Now I teach adults, edit manuscripts, care for my great-granddaughter and I’m on the third draft of my next book, a tween fiction.
I am most proud of my work with women. Today I continue to volunteer to mentor disadvantaged, marginalized and abused women in recovery.

And I am proud of my memoir, Separated, Acting Badly.

Q: What advice do you have for a young person seeking a career today?
A: Success is where your greatest passion meets the needs of the marketplace. You hear “follow your heart,” but with the cost of education today, your heart can lead to financial ruin. Yes, follow your heart but there’s also a stomach(s) to feed. In my twisty-turvy career path I’ve taken low-paying jobs serving ice cream, teaching high school, and after my husband left and my third book won a big cookbook award, I took a serving catering job just so I had a party to go to every Saturday night.

Also, if you want to work in a creative field — film, design, publishing — I suggest you work as an intern at the most prestigious company you can find. Find the win/win in every difficult situation.

Q: How did you choose to make your home in South Palm Beach?
A: When I first moved to South Palm Beach in 2006 a stranger said, “Everyone that moves to Florida is either moving away from something or moving to something. Which one are you?” I didn’t miss a beat answering that I was moving away from a marriage breakup. I ran away from California as far as I could until I hit an ocean. And the ocean healed me. Also my parents lived here, and I needed them, especially my dad.

Q: What is your favorite part about living in South Palm Beach?
A: The exquisite aqua sea. I never get tired of looking at it. Also my grandmother was one of the first residents in South Beach when there was only the Tropicana on the Intracoastal side. My aunt also lived in the Imperial. Some South Beach trivia: The Imperial is built around a two-story beach house that was once owned by Howard Hughes. My Aunt Alvina lived there. I came here at 13 and fell in love with South Palm Beach. I watched the (recently demolished) Hawaiian Motel being built from my grandma’s third-story condo. Then the view was all beach and dunes and palm trees.

And now my granddaughter and her daughter live a few steps away. My husband, George Canberg, an artist, has a trailer at Briny Breezes where he paints. I call Briny my happy place.

Q: What book are you reading now?
A: I’m writing a kids fiction book so I’m into YA. I’m reading With the Fire on High, by Elizabeth Acevedo. One of my students also recommended Little Fires Everywhere.

Q: Have you had mentors in your life? Individuals who have inspired your life decisions?
A: My father. I feel sorry for the men who married me because my father was a hard act to follow. He was always very proud of me. But then I’ve been a workaholic who carried a briefcase to first grade. He was a small-town dentist, honest, humble, admired and he never said a bad word about anyone. I must have been in my 40s or 50s when I realized that my father was one of the grandfathers of the National Basketball League, a forerunner to the NBA.

Every time I drive into my condo parking lot I think I see his green station wagon. He passed last April at age 99.

Another mentor is Adair Lara. She was a columnist, not an academic, but she taught me how to write and teach.

Q: If your life story were to be made into a movie, who would play you?
A: I’ve been told that I’m a weird mix of wit, sophistication, and immature naiveté. I’d like it to be Meryl Streep because she can capture nuance and paradox.

Q: Who/what makes you laugh?
A: Honesty. Brutal honesty. A very successful writer told me once, “Barbara, when you write, you’re so funny. But when you talk, you’re not funny at all.” I find that hilarious.

Also my 7-year-old great-granddaughter, Giselle Solis. I can’t get enough of her. I wish I could see the world through those beautiful brown eyes.

Visit www.barbaraflores.net for more on her work.