Mosquito bites have gone from nuisance to real worry after the city of Lake Worth reported on Aug. 25 that a resident had tested positive for Zika infection. It was the second case of what health authorities are calling nontravel Zika in Palm Beach County in August.
Zika is spread through two routes, either through the bite of a virus-carrying mosquito, or through unprotected sex with an infected partner.
It appears that 42 out of Florida’s 43 non-travel Zika cases so far were spread through a mosquito bite, Florida Surgeon General Celeste Philip said during a visit to Boca Raton on Aug. 29. She was traveling with Gov. Rick Scott, who is holding Zika roundtable discussions with local officials statewide.
The state still believes ongoing transmission is taking place only within the small identified areas in Wynwood and Miami Beach in Miami-Dade County, Scott said, reiterating that in Palm Beach County, public health workers have been unable to find any additional cases, leading them to believe the two cases here are isolated.         Mosquito counts along Palm Beach County’s coastal barrier islands throughout August have remained quite low compared with the rest of the county, and so helicopter spraying hasn’t been planned anywhere east of Military Trail, said Chris Reisinger, the environmental analyst for Palm Beach County’s Division of Mosquito Control.
Instead the county focuses on spot mosquito control efforts with larvicide pellets, and fogging with a synthetic pyrethroid insecticide.
The county places mosquito traps throughout the region, and the highest number of potential Zika-carrying mosquitoes found along southern Palm Beach County’s coast was 22, Reisinger said. They appeared in a trap at George Bush Boulevard and Andrews Avenue in Delray Beach in late August. That number is below the state’s guidelines for spraying, Reisinger said.
A later sampling in the area found none of the disease-carrying mosquito species.
Compare that with Belle Glade, where traps recently recorded about 2,200 nuisance mosquitoes.
“For the most part, we just don’t see that many on the islands,” Reisinger said. “Twenty-two means, most likely, someone left trash in the area and mosquitoes are breeding there now.”
The types of mosquitoes that spread Zika are Aedes aegypti and Aedes albopictus. They’re what’s known as container breeders. That means a discarded soda can, an old tire, a forgotten watering can, a neglected birdbath, a wheelbarrow or even waxy ornamental plants like bromeliads, which gather and hold sprinkler water, can become breeding sites for potentially disease-carrying mosquitoes.
Regularly inspecting your property and eliminating such hazards is one solid way to reduce your Zika risk right now, Reisinger said. He suggests people replace bromeliads with plants that don’t capture and hold water, or else to flush and treat them regularly.
“I ripped out all my bromeliads in January when I found mosquitoes breeding there. Otherwise you have to treat them with a larvicide like Mosquito Bits every couple of weeks, and it’s a pain,” he said.
Many communities along the coast depend on Palm Beach County’s Mosquito Control division to manage their issues with the pests if necessary, he said. The department will send an inspector out if a property owner can’t solve the problem by eliminating standing water sources.
Since July, the state has given the department more money to do that. The county has received an extra $170,000 to support mosquito control efforts, and may receive another $85,000 in September. That money is helping the county add a new mosquito control truck, new lab equipment and additional staff to help with old tire disposal and to respond to mosquito reports, Reisinger said.

Virus transmitted by sex
In the first Palm Beach County case, the infected person reportedly often traveled to Wynwood for work. But chatter among mosquito control experts is that mosquitoes may not be the cause of the latest Lake Worth case. Zika may have been transmitted through sex.

Zika is different from other mosquito-borne diseases such as West Nile virus or dengue fever in that humans can unknowingly be carriers.
Only about 1 in 5 infected people shows symptoms, so if someone acquires the virus during travel to a Zika hot spot such as Brazil or Puerto Rico, he or she can come here and unknowingly spread it to others through sexual contact.         That’s why some health officials think pregnant women in Florida should either abstain from sex or insist that their partners use condoms, travel or no travel, symptoms or not.
In pregnant women, particularly those in early pregnancy, Zika has been associated with severe birth defects, especially nervous system damage such as microcephaly, which is abnormally small head growth.
But not all pregnant women with Zika infection give birth to babies with birth defects.
A study in Brazil found that of 72 women who tested positive for Zika illness in their early pregnancy, only 12 saw fetal abnormalities on ultrasound.
The Florida Department of Health is aware of 70 pregnant women who have suffered Zika infections. The agency announced that one had delivered a baby with microcephaly.
The two communities in Miami-Dade County dealing with active Zika outbreaks, according to the Florida Department of Health, are the artsy Wynwood section near downtown and the touristy Miami Beach.
On Aug. 23, the state added Pinellas County to the list of areas with a case of nontravel Zika. Meanwhile, the state is aware of more than 500 cases of travel-related Zika.

Spot control works best
along the coast
Palm Beach County’s mosquito control efforts involve nighttime aerial spraying of pesticides. The insecticide used is Dibrom, which is highly diluted and sprayed in a fine mist so that it remains aerosolized for a prolonged time. It kills insects on contact. Chronic exposure can be toxic for most creatures, including birds, fish and humans.
Mosquito Control officials spray it only at night for the time being to avoid humans and pollinating insects needed for agriculture. However, the Zika-carrying mosquitoes are daytime fliers.
Unless mosquito counts surge, spraying east of Military Trail is unnecessary, Reisinger said.
As long as people are traveling to Zika hot spots and then returning to the United States and having unprotected sex, mosquito control efforts alone are unlikely to halt the spread of Zika. 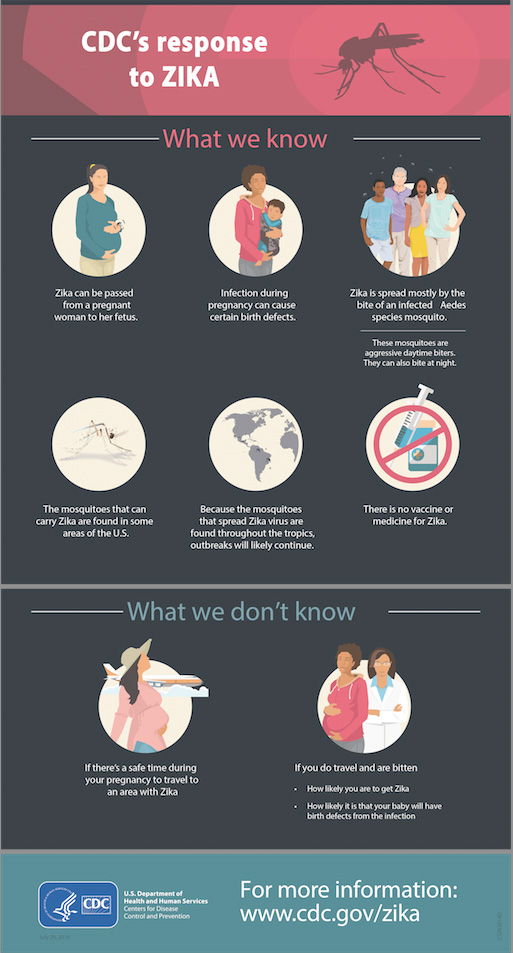