A detail of the window at Bethesda-by-the-Sea that depicts the biblical story of Jonah. Tim Stepien/The Coastal Star

While not meant as a recruitment tool to lasso in the faithful, the Bethesda-by-the-Sea Church tour has drawn in many a curious visitor to Palm Beach over the years.

The tour has been around for 40 years, said Ann Elizabeth Hall, who serves as chairwoman of the tour committee and heads up a team of docents including Peter Broberg, Robert E.  Jackson, Robbie Jackson III, James Goodner, Charles Frankel III and John Buxton.

“It changes people’s lives,” she said. “It has brought people from all over the world into the church to learn more about it.”

This window on the north wall depicts St. Nicholas.

Docents, stylishly dressed in navy blazers and white slacks, share the history and art of Bethesda with those who may have never been inside the church before, as well as those who come regularly.

“Some people have become church members after taking the tour,” Hall said. Seeing the church and its majestic stained glass windows certainly has had a lasting effect on her.

Hall, a longtime Palm Beach resident who now lives  over the bridge in West Palm Beach, was a 9-year-old girl who desperately wanted to hold onto her belief in Santa when she first set foot inside Bethesda-by-the-Sea Church many years ago.

“It was Christmas Eve,” recalled Hall, who had come down with her family from Asheville, N.C.

“The church was exquisite and I saw St. Nicholas in a stained glass window. I couldn’t wait to tell everyone. Surely Santa was real if they had his picture in the church.”

The Episcopal church in Palm Beach, built in 1925-1926, has been near and dear to her ever since.

With more than 50 stunning stained glass windows, it’s hard to pick a favorite. Hall’s first choice is the sapphire blue Te Deum window over the high altar. It was made in England and shipped to Palm Beach in 1940 during World War II in three pieces on three different ships. 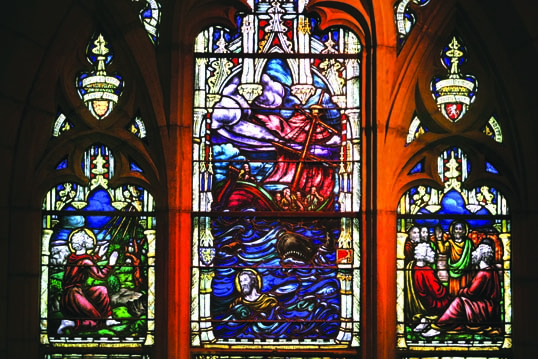 This window on the north side of the church shows the story of Jonah. The window was donated in 1945 by Lawrence Emory Haskell as a memorial to his wife. Photos by Tim Stepien/The Coastal Star

Hebrew prophets Micah and Isaiah are in the left lancet, Apostles Peter and Paul are in the middle along with a depiction of the Annunciation of the Angel Gabriel to the Virgin Mary. The right lancet contains church fathers Pope Gregory and St. Augustine.

“No matter where you sit in the church, that window is captivating,” she said, “especially in the morning when the sun shines through.”

Hall’s sister, the late author and historian Kathryn E. Hall, was in charge of the tours for many years and wrote the first church tour as well as two history books about Bethesda. Ann Hall, a historian and an author herself, worked with her sister on the tours, history projects and publications and wrote the most recent tour book (available at the church).

Bethesda, the guide explains, means “the house of healing.” The parish itself began in 1889 and there have been three church buildings.

The first was a small wooden building on the north end of the island; the second, a Moorish-style church on North Lake Trail that was deconsecrated after 31 years and is a private home today. 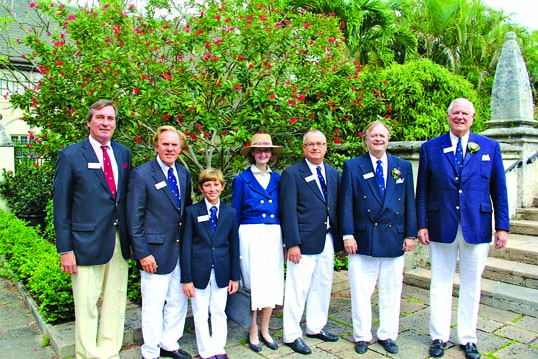 The tour covers more than just the stained glass windows. Visitors learn about the cornerstone that commemorates Ponce de Leon’s landing in Florida, the sculptured stone on both sides of the front entrance and the inviting Cluett Memorial Garden outside, with its Japanese koi fish and colorful blooming plants.

But the stained glass windows are show-stoppers, each with a story of its own.

Most people, Hall said, know about Jonah being swallowed by a whale, so that window is always a favorite.

They may be less familiar with other biblical accounts of scenes on the sea (Jesus walking on water, for example), the 12 apostles, the patron saints of Christian countries, or bishops in the American Church. All can be found on the magnificent stained glass windows of Bethesda-by-the-Sea.

During the season (September through November and January through May), church tours are given at 12:15 p.m. on the second and fourth Sunday of the month, following services. During the summer (June-August), tours are at 11:15 a.m. on the fourth Sunday. Other tours are available upon request. For more information, call 655-4554 or visit www.bbts.org.