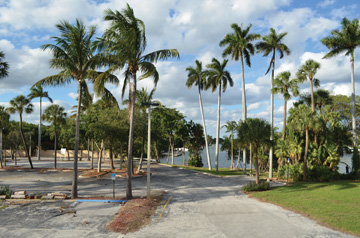 The former Wildflower site, at Palmetto Park Road and the Intracoastal, as it now looks.
Photo by Jerry Lower 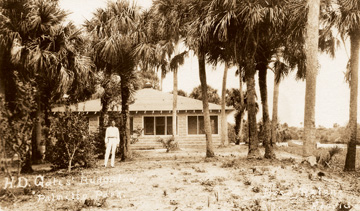 Harley Gates stands in front of the original home on the property in the early 20th century. 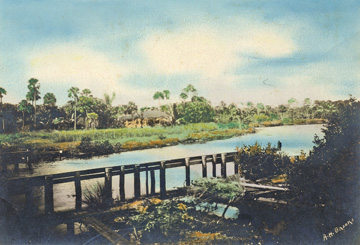 The view of the property from the eastern side of the water before the first bridge was built in 1917.

Elected officials find themselves in another tug-of-war between developers and residents over what to do with a vacant waterfront parcel, in this instance, the former Wildflower nightspot just northwest of the Palmetto Park bridge.

The City Council’s request for informal “letters of interest” and a special workshop drew proposals from three stand-alone restaurants, two multi-story complexes, a recreation-oriented business and one resident who just earned an architecture degree.

“I’m proposing a park, because it’s what I want. I want to go there, it’s something I can afford, and I think it’s the right thing to do,” fledgling architect Jose Barrera told council members at the Oct. 18 workshop. “You actually want a waterfront park also, you just don’t know it yet.”

Mayor Susan Whelchel cautioned presenters of proposals and the audience at the special session that council members would not make any decisions on the future use or possible development of the property.

Two of the competing restaurants — BrickTop’s and Guanabanas — first made presentations at an Oct. 4 meeting of the Federation of Boca Raton Homeowners Associations.

“I like to say it’s a Houston’s that’s kicked up a notch or two, but you can be the judge of that,” said BrickTop’s chairman, Joe Ledbetter, who co-founded Houston’s, sold out his share and has since opened BrickTop’s in Naples, Atlanta, Charlotte and Nashville. Ledbetter envisions a 7,500-square-foot restaurant overlooking the Intracoastal Waterway.

Guanabanas, which features outdoor eating under oversize Seminole chickee huts and live music three nights a week, opened as a sandwich shop in Jupiter in 2004, then renovated to a full-service eatery in 2008. It would construct a 4,700-square-foot dining area in Boca Raton supported by a 5,600-square-foot kitchen building if its proposal wins.

“This whole thing is kind of an Old Florida experience,” said Chad Van Boven, Guanabanas president. “It’s outside, everything is handmade. … It’s basically a restaurant in a park.’

The Hillstone Restaurant Group, which operates the Houston’s on Executive Center Circle near Glades Road and Military Trail, threw its hat into the ring at the workshop. It, too, would build a 7,500-square-foot facility if selected.

Also making proposals were the Boca Outdoor Center, the Boca Dockside Marketplace and developer Jim Comparato. The Outdoor Center would be a second location for the kayak and paddleboard rental operation; it currently operates as the Jupiter Outdoor Center in conjunction with Guanabanas. It seeks 450 square feet of space.

The Dockside Marketplace would be a four-story building with a produce market and performance space on the first floor, restaurants on the second and fourth floors and boutiques on the third.

“My objective is to create something that’s not only world-class but on par with CityPlace or with Downtown Delray, Atlantic Avenue, and putting another restaurant downtown is not enough,” James Peters said in presenting the Dockside Marketplace plan.

Proposed rents range from $24,000 a year promised by the Boca Outdoor Center to $500,000 a year for at least 20 years offered by the Hillstone Group.

The city bought the property for $7.5 million in 2009 after deciding the site has strategic importance to the downtown.

Council members want the property and the waterway area open to the public with amenities to attract the public to the site and a connection between the parcel and Silver Palm Park, on the south side of the Palmetto Park Bridge. They also asked that proposals include an attractive pedestrian orientation.

Comparato proposed a three- or four-story, mixed-use development with two or three restaurants and retail and office space. He would move Silver Palm’s boat launch north of the bridge and connect the parcels with a riverwalk if the council approved.

Details of each proposal are posted online at www.ci.boca-raton.fl.us/wildflower.

The debate is similar to the one over Ocean Strand, vacant oceanfront acreage the Greater Boca Raton Beach and Park District owns. A developer’s proposal to put a private cabana club there in late 2009 prompted an army of neighbors to protest anything but a park there. A consultant is devising an inventory of features at city and district parks to determine something different to go in Ocean Strand.

Whatever changes come to the Wildflower site, neighbors are on guard against increased traffic emptying into residential areas and a return of late-night music for which the club was noted.

James Hendrey, who lives opposite the site on the east side of the Intracoastal, recalled walking across the bridge in pajamas and robe to complain about the sound in the Wildflower’s heyday.