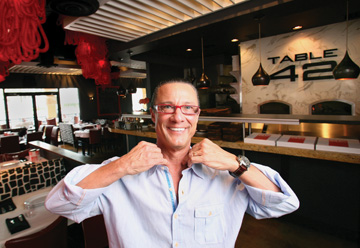 No matter what the economic climate, diners still must eat. Restaurateurs may be scaling back, lowering menu prices or offering less unfamiliar foods, but many are still willing to take the plunge into the hospitality industry.
In the two east Boca Raton plazas, Mizner Park and Royal Palm Place, a few new restaurants have opened, expanding the offerings with American gastropub fare, tapas, Italian cuisine, cheeses and spices and teas. 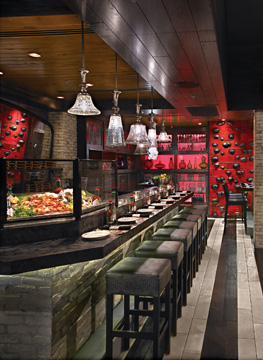 In Mizner Park, Gary Rack, a steel-building magnate, is behind the new Rack’s Downtown Eatery + Tavern. Envisioning a “neighborhood gathering and eating place,” where regulars would show up
to dine on simple, updated comfort fare, he’s designed a contemporary, eye-catching space in the old Pranzo location.

Rack had a few models in mind when creating it. “I like the feel of the Buckhead Diner,” he said, of the Atlanta landmark casual eatery that’s set a bar for new American comfort food. He’s also owner of Miami and Lauderdale Italian restaurants, and wanted to try a new concept with the DET.

Whimsical touches abound in the décor: rope chandeliers, light fixtures made of silverware, and specially made tiles that emulate bubbling brown cheese on pizzas. Diners can watch the pizza makers, or sit in the booths or at high-top tables, and choose from foods such as lobster mac n’ cheese, Greek salad, cheese and
artichoke-stuffed squash blossoms, tuna steak “Oscar,” and Yesterday’s onion soup, named for a favorite restaurant Rack visited as a teen in Fort Lauderdale. Daily specials as well as fresh fish selections round out the menu.


Happy hour here draws bar patrons for signature cocktails and half-price appetizers. The restaurant swings after dark, when the indoor-outdoor bar sees the action, and the music is ramped up for a club-oriented crowd. 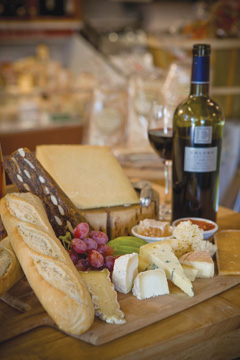 It’s quieter over at The Cheese Course, and though not exactly new, it’s still yet
to be discovered by some diners.

The small shop features hundreds of cheeses from around the world for sale, including some by the pound, as well as all serving platters and utensils for cheese service, and the wines to accompany them.

Diners, however, are missing half the shop if they don’t check out the bistro menu. A number of café tables lines the room and patio, and cheese and wine lovers can mix and match tastings, based on the country of origin (Spain, for example, has tetilla, manchego and garrotxa — a goat’s milk cheese from Catalonia) or cheese flavors (mild, strong, medium), served with go-withs like Marcona almonds and quince preserves or sundried tomato pesto, homemade cranberry raspberry relish or a specialty meat.

Bistro sandwiches include an Italian Caprese, Albacore white tuna melt with Gruyere, roast turkey breast with smoked cheddar, a sopressata salami with provolone, and a grilled pastrami with Swiss Emmental. A number of salads, with options for meat add-ons are available — all at reasonable prices.

Shoppers will find the staff friendly and knowledgeable, and willing to help pair foods and wines and even offer samples when possible. 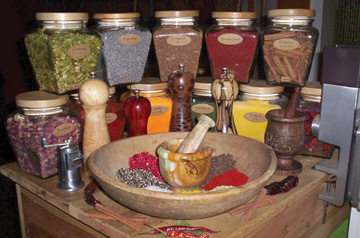 At the Spice and Tea Exchange of Boca Raton, the aroma is a best-seller — the shop’s heady spices, displayed in old-fashioned apothecary jars, perfume the air. With more than 170 internationally sourced spices, herbs and teas, along with custom blends, specialty rices, flavored sugars and a variety of salts, are sold alongside the best seller — a blend called Florida Sunshine, made in house and “with love,” according to owner Paulette Callender. It has citrus zests, sea salt, ginger, peppercorns and rose petals in the mixture. Other blends are for special applications —popcorn blends, chili blends and seafood rubs, to name a few.

“We have flavored sugars, for example the espresso sugar — I used it as a steak rub, and when it was grilled, it caramelized and had that great flavor,” she said.

Cooks who are frustrated at having to buy a large jar of spice for a recipe that calls for a mere one-eighth teaspoon of the stuff will appreciate the by-the-ounce availability of most herbs and spices. They’ll also like the
cook’s tools — mortar and pestle sets and grinders, salt cellars, infusers and a variety of teapots for the perfect brew.

“We also sell the Himalayan salt platters. Heat them in the oven and then serve steak pieces or scallops — and they cook right in front of you, and have the salt infused in the flavor. Or chill them, and serve cheeses and meats on them,” Callender said.

While prepared foods aren’t sold here, it’s a food lover’s exotic supply store, with recipes and suggestions for using the products proffered by the staff. Check for the occasional cooking demos and classes here; their schedule is posted on their website.

Over at the Royal Palm Place, new restaurants include Italian, tapas and a bar-lounge, boosting the restaurant count at the plaza to more than 30. A number of international eateries fill this plaza — from French to Indian and Thai. 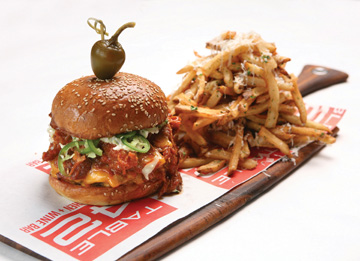 The old Coal Mine Pizza was converted to Gary Rack’s Table 42 — with an updated pizza menu, snappy décor, and a popular burger night. The casual eatery offers patio and indoor dining, with a bar where diners can watch the pizza makers twirl the coal-fired pies.

The place jumps on Wednesdays for the $5 build-your-own-burger event — guests wait in line to put in their custom burger orders and a late-night crowd likes it, too.

The small-plates menu includes traditional tapas such as potatoes with homemade tomato sauce, baby herring in vinegar, oil and parsley; jumbo shrimp wrapped in Serrano ham with melon, shrimp in garlic and a Spanish omelet. A nod to modern tapas include the grilled wild salmon with a fresh mango salsa.

It’s a place to meet up for a glass of port and plate of pata negra — cured Iberian ham made from the black pig, or to share a bowl of seafood-rich paella.

Caruso Ristorante is another nearly new restaurant, a family-owned Italian with classic dishes married to modern. Housemade lobster ravioli, gnocchi, or bucatini Amatriciana, with guanciale — an Italian bacon brought in from New York, are a few of the signature dishes.

The owners revamped the interior to add romantic lighting, and have dressed up the adjoining Rouge Bar (Caruso’s is in the former Café Joley spot), with outdoor seating around it as well.

The new Club 303 is a dance lounge with cool drinks on tap for the club set. On Wednesdays, live local bands appear, with a recent Battle of the Bands concert held here. The music wails till wee hours.

Another small American is Maxie’s — with burgers, dogs, salads and yogurt; it’s slated to open sometime in October as well. Later in November, expect Raffaele, an Italian restaurant, to open its doors.

Not a newcomer, the uber-stylish ZED451 nonetheless has done a turn-around. While it maintains its American churrascaria menu (grilled meats brought to the table as long as you can eat), but it now also offers an a la carte menu, plus the choice of only the Harvest Table — a circular room full of creative salads, soups, breads and cheeses. New menu items include Asian pork belly and New Zealand red deer on the small plates, with New York strip, double-cut lamb chops, a brick chicken (good with smoked Gouda mashed potatoes) and a Kobe burger off the ala carte entrees. The mixologists here are standouts, too — for the lengthy Happy Hour or Sunday brunch, try the blueberry mojito to pair with the Buffalo chicken waffle.