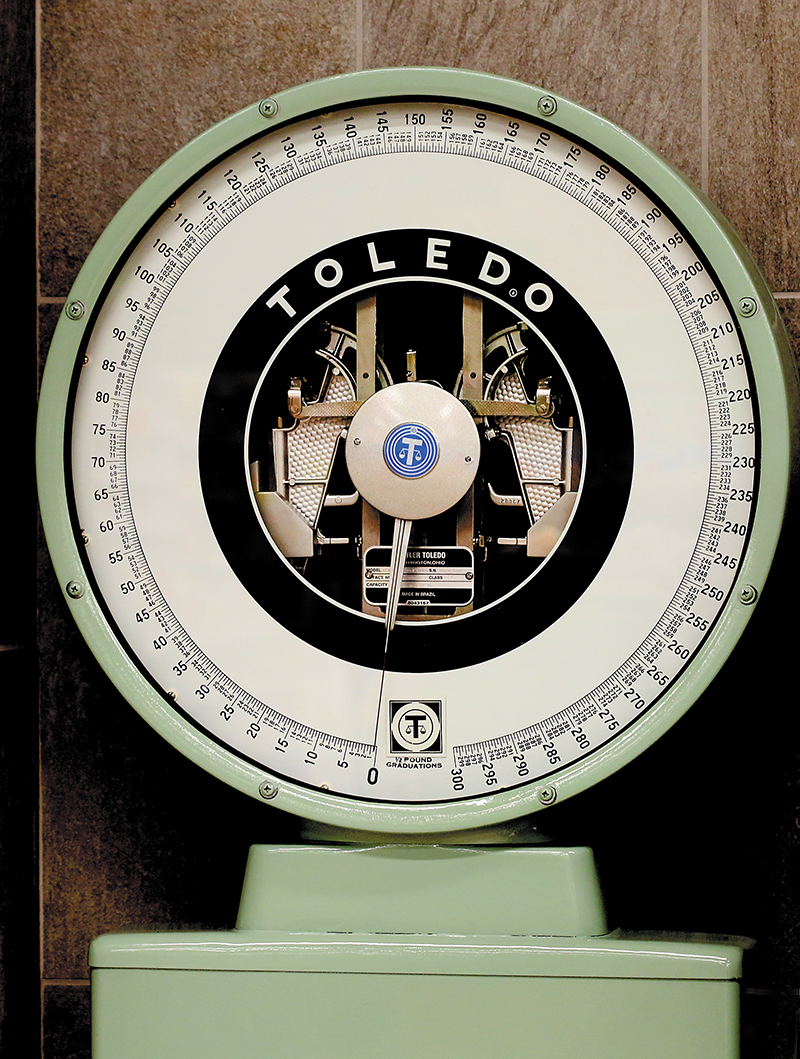 “Publix — Where Shopping Is a Pleasure.”

And then you spot that scale at the front of the store — that old-fashioned Toledo Model No. 2830, that always-present Publix scale, waiting to reveal your weight.

You set the bag of fried chicken aside, the footlong roast beef sub from the deli, the fresh-baked, cream-filled doughnuts from the bakery, and bravely step aboard.

The needle ascends, shivers to a stop and your heart sinks.

Or maybe you smile.

“It’s one of our more common questions,” says Wade Rinderknecht, manager of the new Publix supermarket at Plaza del Mar in Manalapan. “People ask, ‘Where are the scales?’ It’s a unique design of the store.”

Some folks can’t resist checking their weight every time they stop at Publix. Others don’t want to know. 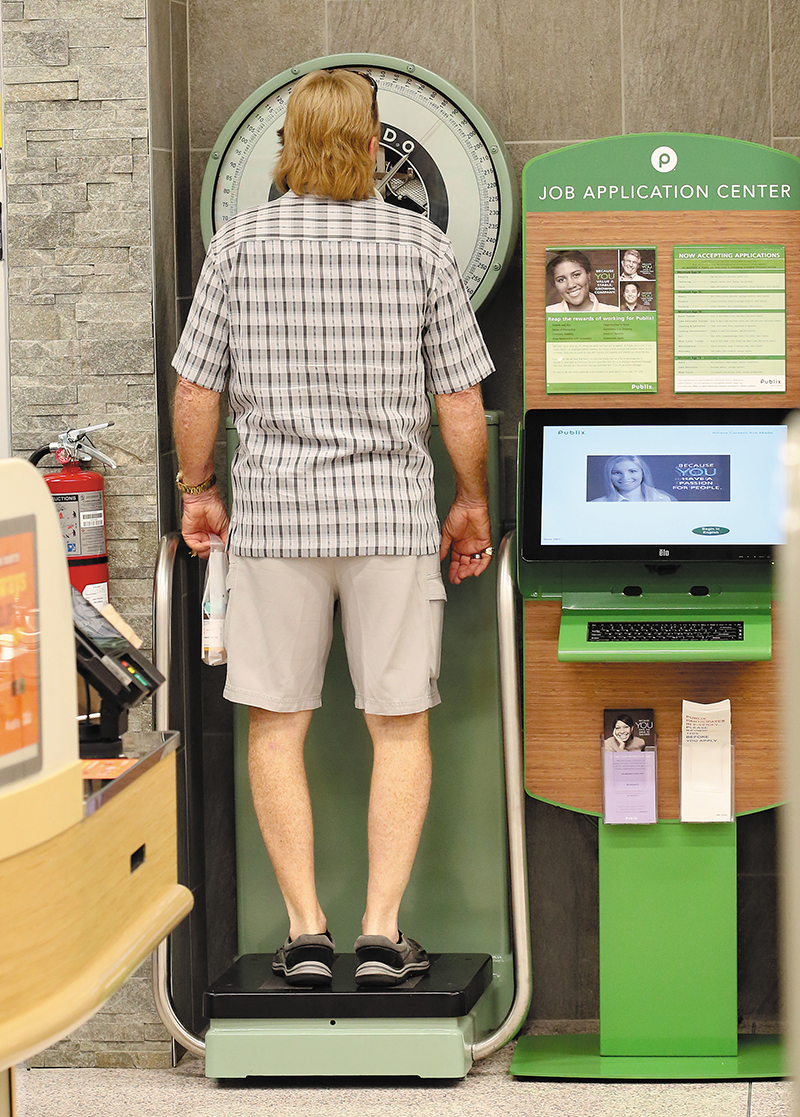 Lantana’s David Smith weighs himself in Manalapan. He checks his weight every visit. Photos by Tim Stepien/The Coastal Star

David Smith of Lantana is a regular. On a recent Saturday morning, he stood on the green-trimmed scale at Manalapan right after the cashier handed him the receipt.

“I have diabetes,” he explained, “so I check my weight at every Publix.”

Actually, the scales have been part of Publix supermarkets a lot longer than shopping there has been a pleasure. Toledo scales (right rear) first appeared at Publix in 1940, and Publix bought and stored as many of them as it could when the manufacturer discontinued Model No. 2830 in 2015. Photo provided

When George Jenkins opened his Publix Food Store on Sept. 6, 1930, in Winter Haven, there were no scales in the 27-by-65-foot space, and the store’s motto was “Florida’s Finest Food Store.”

In those days, most folks didn’t have bathroom scales at home, Jenkins reasoned, and public scales usually charged a penny. His were free, instantly popular, and every Publix has had a Toledo scale ever since.

“Where Shopping Is a Pleasure” didn’t become the Publix motto until 1954, when Bill Schroter, the company’s advertising director, dreamed up the slogan, but Publix has had a bright green color scheme right from the start.

“Why green?” Jenkins once said. “Because A&P used red.”

Jenkins died in 1996, but the original Publix scales are still kept in his former office at the company’s headquarters in Lakeland, and they still work.

The last A&P supermarket closed in 2015, but Publix is still green, and getting greener. Since the Manalapan store opened Aug. 16, another nine Publix supermarkets have debuted, most in Florida, reports Nicole Krauss, the Miami division’s communications manager.

Publix opens about 40 new stores every year, and every one has a Toledo scale, Model No. 2830, near the front doors.

Rinderknecht, the Manalapan manager, notes that every time the U.S. Department of Agriculture stops by a Publix store to calibrate the scales back in the produce department, they calibrate the “people weighers,” too.

But yes, the Publix scales do get a workout. The cashiers see it daily.

“We have kids who dance on it,” says Gayle Steventon, working Express Lane No. 5, just across from the scales. “They get up on them and dance, and get off and jump back on and, ‘Oh, look at my numbers!’ ”

The scales don’t service only human beings, either.

“Some people will come in the night before a trip and weigh their luggage to make sure they don’t go over the airline’s weight allowance,” Rinderknecht says.

Luggage doesn’t worry about its weight, but when it comes to self-image, perception is not always reality. At the Publix in the Fifth Avenue Shops on Federal Highway in Boca Raton, Ann Hankel stepped off the scales in disbelief.

“It must be way off because I’m not that fat,” she muttered to no one in particular.

Hankel weighs herself every time she’s in the store because she doesn’t have a scale at home.

“When I was 20 pounds lighter, I felt fat, and now I’m heavier, I feel lighter,” she said with a bemused smile. “I like Publix, but I should weigh myself before I buy the bread and doughnuts.”

Yes, a shopper’s relationship with the iconic Publix scales can be … complicated.

Cashier Patti Gamble has found an approach that works for her.

“I used to weigh 300 pounds,” she says — though it’s hard to believe today. “I’m a lot lower than that now, but I don’t want to see what I weigh, so sometimes I stand on the scales backward, so I can’t see what it says.”

Then she tells a family member to report the weight to her doctor.

And not everyone who steps off the scales disheartened is overweight. 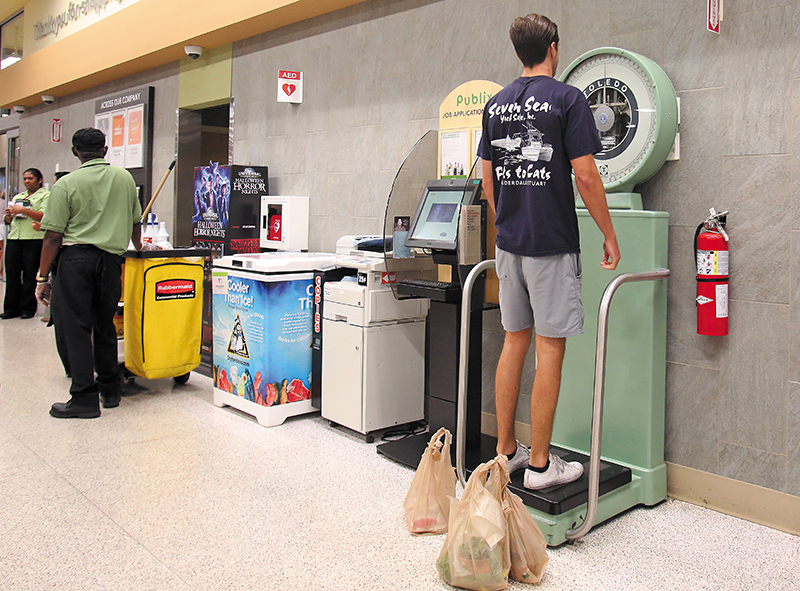 Carlos Ballbe steps on the scale in the Publix at Boca Raton’s Fifth Avenue Shops. He says he wants to gain weight.

Carlos Ballbe, 23, an urban design student at Florida Atlantic University, was frustrated when the Publix scales rated him a mere 150 pounds.

“I’m trying to gain weight,” he said. “I need muscle mass. I gain and lose 2 or 3 pounds here or there, but I fell off my bike and haven’t been able to work out, so it was down 3 pounds.

A Publix store without Toledo scales up front? It’s unthinkable. But not impossible.

In 2015, the same year A&P closed its last store, the Mettler Toledo Co. stopped making Model No. 2830. Publix bought many of the remaining scales and stored them in a Florida warehouse.

“As stores have closed, we stored the scales so they can be placed in new stores,” Krauss says. “I don’t think there’s a large stockpile of them, but we should have enough to keep them in rotation for a while.”

So, put down the chicken, the subs and the doughnuts. Step right up and be prepared to smile if you like what you see, or shout “Holy Toledo!” if you don’t.

Valerie Pullman works in the deli at Manalapan, and she’s seen it all.

“I’m from the Bronx, and I find it hard to believe,” she exclaims. “They’re getting ice cream and cake and then they get on the scales and get a little sad. Why would you do that to yourself?

“I say don’t not get the sub. Just don’t get on the scales!”