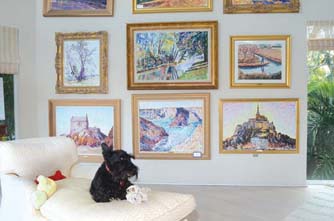 Designer Virginia Courtenay’s Scottish terrier, MacDuff,
rests on a chaise in front of a group of paintings at her
home on Seabreeze Avenue. 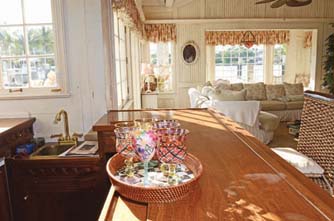 Delray Beach has such a homey feel that even newcomers are eager to help share that traditional sense of community.

That’s how it is with Kathryn and Robert Stewart, who bought their Basin Drive home in October 2010. The Stewarts are eager to show off their renovations on the Delray Beach Home Tour, set for March 14.

Each year the home tour, benefiting the Achievement Centers for Children & Families in Delray Beach, picks a different area of the city, says Emma-Jane Ramsey, event and marketing manager for the nonprofit. Last year’s focused on the Lake Ida neighborhood.

The group’s selection committee picks homes that are new or recently renovated, have interesting architecture or have some historical value. All of the homes on the 2013 tour have waterfront views, Ramsey says, either of the Intracoastal or the ocean.

She wouldn’t reveal the addresses of the seven or eight on the home tour, but said homes on the following streets would be featured: Basin Drive, Beach Drive, Ocean Boulevard, Seabreeze Drive and Southways Street. 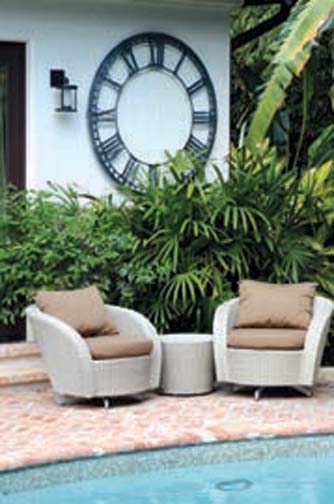 Time stands still on a large clock face in the pool area of this home on Basin Drive.

The Stewarts’ home is perfectly situated on the Intracoastal with a boat dock, pool and screened wrap-around porch. The Stewarts added a wall of French doors, giving the feeling of having “the outdoors inside the house,” says Tula Kithas, Kathryn Stewart’s mom.

The pale pink Bermuda-style home has two stories with five bedrooms and bathrooms in its 6,000 square feet. Most of the living area has oak floors, while the kitchen has green-and-white marble tile in a checkerboard pattern. The master bedroom features a balcony with a pergola over it.

The TV room on the first floor has original cedar paneling; next to it is a family room with a coffered ceiling and beadboard in between the coffers. Deep moldings are another interesting architectural detail throughout the house. 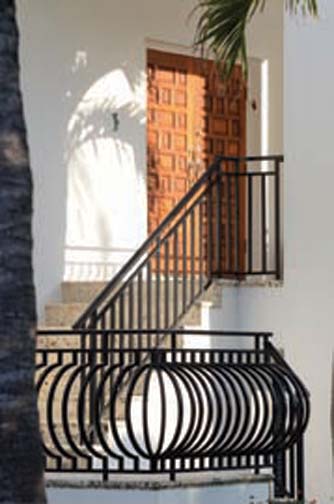 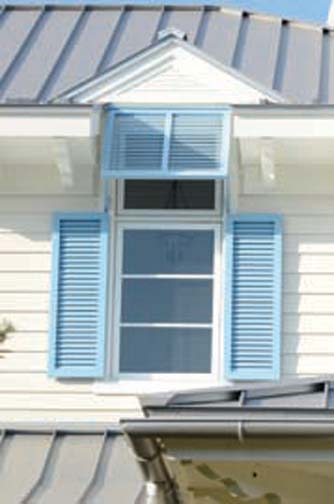 Sam Ogren Sr., known as the father of Delray Beach architecture, designed it, says Tricia Irish, who will be in charge of volunteers for the Stewart house on home tour day. 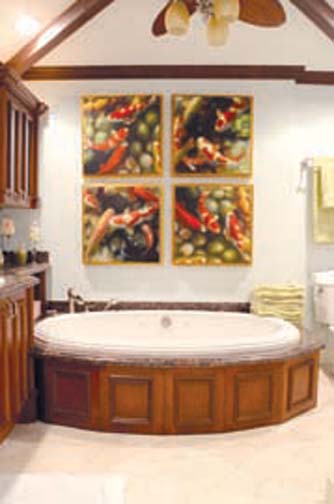 Large images of carp adorn the bathroom walls at the home
of Robert Hush and Lauren Alberti on Southways Street.

“Many significant Delray families have resided in this home (on Basin Drive) over the years,” Irish says. “From 1971-1995, Frances and Robert Bourque lived in the lovely home and renovated it significantly. Frances Bourque was instrumental in the creation of Old School Square Cultural Arts Center.”

Another eager homeowner on the tour is Sandra Hoesley of Beach Drive. “A neighbor knocked on my door and asked me to open up my home for the tour,” Hoesley says. “I love Delray and wanted to give back to the community.”

Her new 6,000-square-foot, two-story home was designed by architect Roger Cope of Delray Beach in the Key West style. It has a metal roof with the exterior painted in jute with ballet white accents and shutters in whipple blue — all Benjamin Moore colors. 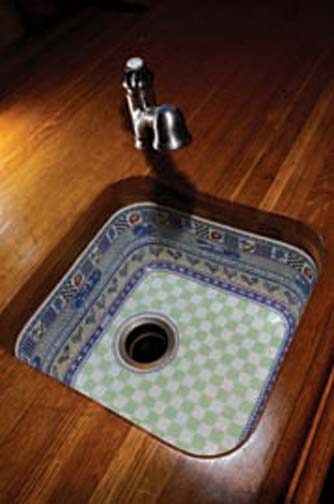 The bar sink at the home of  Kathryn and Robert Stewart.

The home, built by Gary Miller of GLM Builders in Delray Beach, replaced a 1955 ranch house that Hoesley lived in for 12 years. “It was a hard decision, I loved that house,” she says. But it needed new electric and plumbing.

Her just-finished home has four bedrooms, 5.5 baths with hardwood and limestone floors. It also has a lap pool and a boat dock.

Just 100 years ago, that coastal section of Delray Beach wasn’t popular, says Robert Ganger, chairman of the Florida Coalition for Preservation. “It was not a desirable area for farming or living,” says Ganger, former president of the Delray Beach Historical Society.

At that time, there was no easy way to cross the Intracoastal Waterway. People and animals crossed on separate lighters (unpowered barges), he explains. The first oceanfront house, really a fish shack, on one acre of land was offered for $45, but it didn’t sell.

That oceanfront area also had a cemetery. “No one knows its location, but bodies are still there,” Ganger says.

It took a long time for that area to be developed. Once it had the infrastructure in the form of bridges across the Intracoastal and electricity, added in the 1920s, the area began to blossom.