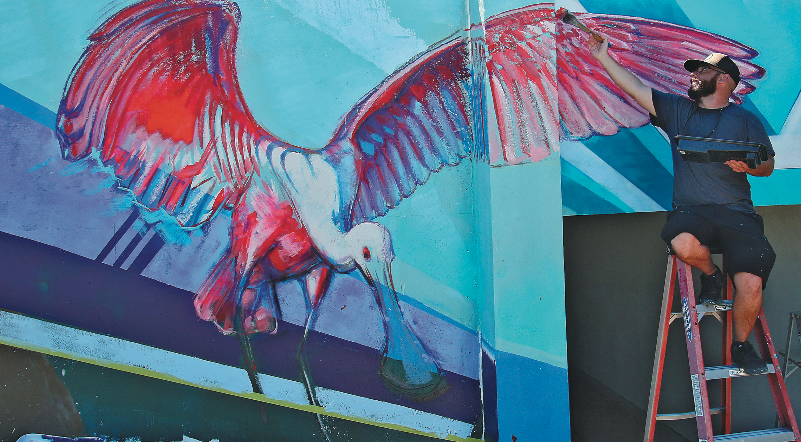 Tom D’Auria paints a roseate spoonbill on the beach side of the Middle Tunnel at Spanish River Park. With other artists set to  work on the South Tunnel this month, the public art project will be complete. Photos by Tim Stepien/The Coastal Star

See the artists in action

When Spanish River Park opened for business at 8 a.m. on April 8, beachgoers were met by several makeshift signs in the parking lot.

“Middle Tunnel Closed,” they said. “Use North Or South Tunnel.”

They paid no attention to the sawhorses blocking the paths to the tunnel entrance.

Dirr and D’Auria were not here for a day at the beach. They were here to turn this most pedestrian of pedestrian tunnels into a work of art.

Their canvas wasn’t the actual tunnel leading beachgoers safely under State Road A1A, but the walls surrounding the entrances, six feet to either side, six feet in, and all the way up to the top. 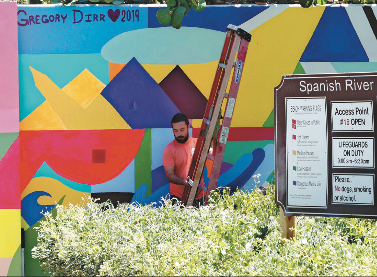 Artist Gregory Dirr moves his ladder while painting an abstract mural outside the tunnel’s other entrance.

Dirr, 32, a Boca Raton resident, and D’Auria, 28, of Lake Worth Beach, are both graduates of the Ringling College of Art in Sarasota.

Dirr has done public art projects in Fort Lauderdale and Pompano Beach, and D’Auria has taught at both Bak and Dreyfoos, Palm Beach County’s middle and high schools of the arts.

This Spanish River tunnel project is the newest effort from the city’s Art In Public Places program, championed last year by City Council member Andrea O’Rourke and financed with $40,000 from both the city and the Greater Boca Raton Beach and Park District.

In October, both Dirr and D’Auria were among the artists who painted marine murals on a maintenance wall at Red Reef Park. Now they’re back to tackle the tunnel.

“This is super local,” Dirr said as he and his assistant, Ashleigh Bremser, arranged his ladder, paints and brushes before his white wall. “It’s exposure, and it’s real. In a private job, you may get more money, but the work gets less exposure.”

Dirr is going to adorn the tunnel’s parking lot entrance with a busy mix of abstract shapes and bright acrylic colors.

“I like unsaid things,” he explained. “I like the viewers to make up things for themselves so they’re a part of it. I tried to go super rainbow with this proposal because I’m trying to encourage people to take pictures in front of it.”

On the beachside entrance, D’Auria has envisioned the sort of representational painting you’d expect at a beachside park — a realistic rendering of a heron, egret and spoonbill among oversized orchid, hibiscus and bird-of-paradise blooms.

Both feel born to the mission.

“I used to sell little drawings for nickels and dimes in elementary school,” D’Auria recalled. “Drawings of cars and cartoons and stuff. When the teacher found out, I had to stand in front of the class and apologize for taking their money.”

Dirr was a grade school Picasso as well.

“At Whispering Pines I got in trouble for drawing on desks,” he confessed. “One teacher always knew it was me because it was good.”

Now they’ve progressed from nickels, dimes and desktops to tunnels.

“I did the mural at Red Reef Park, so it’s good to be back,” D’Auria said that first Monday. “And I’m working on the beach. You can’t beat that.”

As it turned out, working on the beach wasn’t a day at the beach.

The ground on which they worked was both sandy and sloping. And the wall was tall. D’Auria had barely begun before realizing his 6-foot ladder was too short, and the sand beneath it too soft. He had to borrow Dirr’s 10-footer. Sometimes he taped his brush to an aluminum pole and worked from the ground.

“I’m constantly falling in the sand,” he said, glumly. “And I’m not the tallest person.”

By Wednesday, Dirr’s abstractions were progressing swiftly, but D’Auria was starting to second-guess his plan.

“I’m still playing around with it in my mind,” he muttered. “I’m just afraid I won’t finish.”

And Dirr was sore.

“These are awkward positions,” he said. “These positions seem comfortable for about 30 seconds and then it aches.”

By Friday, Dirr had completed the whole left side of his wall, with a lot of help from his friend Bremser, who mixes the next color he’ll need while he paints on. She also helps him apply for grants and commissions.

At the other end of the tunnel, D’Auria was struggling, and stressed. He’d completed the multicolored, striped background, and the large and impressive roseate spoonbill, but the tunnel’s physical setting was forcing modifications, and a later schedule.

Working on the beachside entrance, D’Auria gets the full heat of the rising sun, while Dirr has the parking lot’s shade, so D’Auria has started arriving closer to noon and working until the park closes — or later. And the seagrape trees encroach from either side.

“I’m thinking of taking out the egret,” he said, “and having the orchids there.”

Perspective is a problem, too. On either side of the entrance, a pillar juts out a foot from the wall, so D’Auria has to wrap the spoonbill’s huge pink wing around it while maintaining a convincing perspective. Dirr’s side has columns, too, but they accommodate abstract shapes much more easily.

By Wednesday of the second week, the egret was back, but the heron had been sacrificed.

“I find myself spending more time looking at the mural and pondering what I want to do compared to actually applying the paint,” D’Auria confessed. He appeared exhausted.

The hibiscus was gone, along with the heron, and he’s had to change the angle of the egret’s neck to accommodate the seagrape tree. But seen from 20 feet away, the great pink spoonbill’s wing traverses the column smoothly.

Lunch was granola and protein bars.

“It keeps me going for a while,” he said.

Meanwhile, Dirr had coated his abstract design with the sealant and emailed a photo of the finished wall to the city to be paid.

Gregory Dirr had little trouble on the parking lot side.

On Friday, their deadline day, Dirr returned to give his work a final look. “This was pretty complicationless,” he said, “and I got a commission. The guy who rents beach chairs wants me to paint his surfboard.”

Over at the beachside entrance, D’Auria was still exhausted.

“This is the biggest mural I’ve ever done,” he sighed. “I definitely need to come next week. I don’t know how many days, but hopefully not so many. Tom D’Auria taped his brush to a pole to deal with awkward angles and because his ladder was too short and unsteady. Photos by Tim Stepien/The Coastal Star

When Spanish River Park opened for business at 8 a.m. on Monday, April 22, beachgoers were met by several makeshift signs in the parking lot. “North Tunnel Closed,” they said.

For the next two weeks, artists Craig McInnis and Ivan Roque would be turning that tunnel into art, too.

The signs and sawhorses closing the Middle Tunnel were gone now, but Tom D’Auria was still there.

He’d missed the deadline by two workdays, but no one in authority complained, and when he had finished applying that final coat of varnish about 7:30 p.m. Tuesday, he was exhausted but satisfied.

“I didn’t end up doing the water lily or hibiscus,” he said, “or the pelican. But I’m happy with how it came out. I think with all the other elements it probably would have been a little busy.”

On Monday, May 6, signs and sawhorses will appear again to let visitors know the South Tunnel is closed as artists Peter Agardy and Agata Ren begin the final third of the Spanish River tunnel project.

When their work is done and all three tunnels have been transformed, the Art In Public Places advisory board will prepare an online “video reveal,” so the public can view the finished works, board chairman Irvin Lippman said.

To be honest, though, the signs didn’t matter much. Beachgoers came and went through the Middle Tunnel while Dirr and D’Auria worked.

On their first Friday there, a teacher from Grandview Preparatory School led an entire class into the tunnel.  “It’s turning out gorgeous,” she announced.

Learn more about the artists and see other work at tdauria.com and gregorydirr.wordpress.com.