Walking tours have long been a favorite of tourists and locals. They provide an entertaining way to dive into culture and history — and in some cases, food and wine — all while getting a little exercise, to boot.

Here’s a look at six guided tours to get you going. 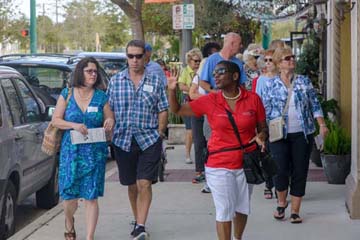 Taste History Culinary Tours
Founded in 2011, Lori J. Durante’s Taste History is the first of its kind in Palm Beach County. This year’s culinary tours serve up a taste of the cuisine, culture, art and history of the main streets and historic districts in Northwood Village/West Palm Beach, Delray Beach, Boynton Beach, Lake Worth and Lantana.
The tours are both educational and entertaining, Durante says.“It’s a bus ride and a lot of walking.” She does all the narrating.
Tour partners include family-owned eateries, bakeries, markets, cafes, juice bars, tea bars, art galleries and nonprofit cultural centers highlighting local artists. Durante, born and raised in Delray Beach and the executive tour director, developed the Taste History Culinary Tours as an extension of the narrated bus tours of historic Delray Beach that began in 2004.
“I had a culinary epiphany on Easter Sunday,” she recalls. “I watch the Food Channel all the time and think food is a good way to introduce culture.”
Tickets are $45-$50 per person, free for children younger than14 (accompanied by a paid adult family member).Pre-payment is required. Tours board at Macy’s at the Boynton Beach Mall.  Call 243-2662 or email tour@tastehistoryculinarytours.org. Private group tours also are available. 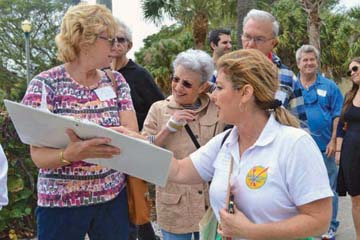 Denise Righetti (right) leads one of her Savor Our City Culinary Tours.

Savor Our City Culinary Tours
Denise Righetti , another fan of the Food Channel, launched Savor our City Culinary Tours 10 months ago.
“I was familiar with the concept of food tours,” Righetti says. “But it wasn’t until I experienced one in San Francisco that I realized this was what I wanted to bring to South Florida.”
She provides historical food tours in walkable neighborhoods in Delray Beach, Boca Raton and Palm Beach Gardens, where small business owners, artisans, purveyors, farmers and restaurant chefs share food stories and their passion for local, seasonal, sustainable eats.
Guests are treated to signature tastes from four to six different stops along the way.
“Our tours are gourmet adventures that take local and visiting foodies behind-the-scenes into each city’s hot culinary communities, where they will be introduced to delicious savory treasures and sweet gems one bite at a time,” she says.
A former marketing manager for Investments Limited in Boca, which has more than 100 restaurants in its portfolio, Righetti wrote food reviews and blogs and then set up tasting menus at restaurants. The culinary tours were a logical next step in her career.
Tours are $65 plus tax and tip. Private tours, art tours and team building outings are available. (954) 410-3177; SavorOurCity.com. 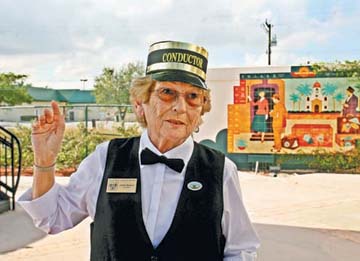 Boca Express Train Museum Tour
The Boca Raton Historical Society provides tours of the Express Train Museum at the FEC Railway Station, Count de Hoernle Pavilion. On display are two 1947 Seaboard Air Line streamliners — dining and lounge rail cars. Both have been restored to their original splendor and deliver a nostalgic look at the glamorous days of train travel.
“We’ve become a more interactive tour,” says Jo Ann Messuri, one of a team of six Boca Raton Historical Society volunteers at the station. Messuri plays conductor, greets visitors at the depot, tells them about the train cars, blows her whistle and shouts “all aboard.”
“After that, I’m the mover-arounder,” she says, as she leads the visitors to interact with the docents who play waiter and bartender. They have already met the station agent and ticket seller in the depot.
“It’s a lot of fun,” she says. “The chef makes corn muffins with guava jelly for everyone.”
Historically, guava jelly was served to passengers after their train crossed into Florida.
Tours, at 747 S. Dixie Highway, Boca Raton, are on at 1 and 2 p.m. April 10 and 24. A 3 p.m. tour is available for children once a month.
Tickets: $10 for adults, $5 for Boca Raton Historical Society members. Reservations required. 395-6766, ext. 100; bocahistory.org. 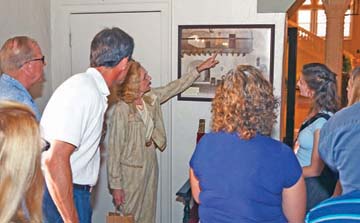 Boca Raton Resort & Club Tours
Those who tour the Boca Raton Resort & Club are amazed at how large and beautiful the property is, says volunteer docent Bonnie Dearborn.
“It’s kind of overwhelming,” says Dearborn, who has been giving tours of the resort for six years. “People find it exciting to learn about how Addison Mizner helped put Boca Raton and the resort on the map and how the hotel has evolved.”
The resort was founded by Mizner in 1926 as the Cloister Inn. The advertising for the hotel was so good at the time and local builders couldn’t keep up with demand. Supplies were hard to come by, Dearborn says, and northerners were coming down in the summer when mosquitoes were fierce.
It all spelled trouble for Mizner.
Clarence Geist, owner of a Philadelphia utilities company, took over Mizner’s bankrupt Cloister Inn and reopened the hotel in 1930 as the Boca Raton Club.
Dearborn, one of a half-dozen volunteer docents from the Boca Raton Historical Society who lead the tours, especially admires Mizner’s design of the Cloister Inn, still a vibrant part of the 89-year-old hotel. But she also applauds the architectural work of S. Fullerton Weaver, who, with his partner, Leonard Schultz, created a 300-room addition to Mizner’s original 100-room inn.
Tours, from 2 to 3:30 p.m., are available the first and third Tuesday of the month through May. Tickets: $15, plus $10 for hotel valet parking. Reservations are required. 395-6766, Ext. 100; bocahistory.org/tours/ Historical Walking Tours of Worth Avenue
A shopping mecca for the rich and famous, Worth Avenue has a fascinating story to tell, and Rick Rose is there every Wednesday to tell it during Historical Walking Tours of Worth Avenue.
Tours, which benefit (Ernie) Els for Autism Foundation (ElsForAutism.com) and are sponsored by the Worth Avenue Association, are a good way to learn about the history of the Avenue — and Palm Beach.
As walkers make their way through bougainvillea-covered vias and past bubbling fountains and designer shops and boutiques, Rose weaves in details about fashion and architecture. Gucci, he says, debuted fashions on the Avenue and Lilly Pulitzer opened her first dress shop in Via Mizner.
No discussion of Palm Beach history would be complete without a primer on Addison Mizner, who gave the Avenue and Palm Beach its distinctive look — and buried his pet spider monkey, Johnnie Brown, in Via Mizner. Tours last 75 minutes and begin at 11 a.m. Wednesdays from November through April.
Starts at 256 Worth Ave. (Via Amore). Tickets: $10. Reservations aren’t necessary. 659-6909; worth-avenue.com.