John Bury, who turns 100 on Nov. 10, wears an Army 8th Air Corps patch and displays a poster of a B-17 Flying Fortress at his Highland Beach condominium. Tim Stepien/The Coastal Star.

John Bury remembers flying over Europe that day more than 75 years ago like it was yesterday.
The lead navigator on a B-17 Flying Fortress, Bury and the bomber’s crew were heading back to their base in England when enemy gunfire knocked out two engines, the landing gear and caused minor injuries to a couple of fellow crew members.
At the time, Bury wasn’t thinking about the long-range future or about the long life he would eventually have.
“I was just hoping to live long enough to make the landing,” he said.
This month, on the day before Veterans Day, Bury will celebrate his 100th birthday, a milestone that no other member of his squadron has reached.
“I’m ready to start on the second 100,” he joked.
Bury, a longtime Highland Beach resident, is one of several veterans who are subjects of profiles written by Town Commissioner John Shoemaker as part of a project to recognize their contributions.
“There is support in town to bring recognition and honor to those veterans of all wars,” says Shoemaker, a Vietnam veteran who as a lieutenant led an infantry platoon in combat. “I had no idea that we had so many heroes living in Highland Beach. The diversity of their experience is amazing.”
Among those profiled is Martin Sylvester, who was involved in the 1944 D-Day invasion and later was wounded during the Battle of the Bulge and escaped three times after being captured by the German army. Former Highland Beach Vice Mayor John Rand, another World War II veteran who is profiled, served as a member of the radio communications team for U.S. and Allied forces in Southeast Asia.
Shoemaker also told the stories of Father Brian Horgan, the pastor at St. Lucy Catholic Church who served as a major in Iraq and Afghanistan, and of Randy Elliott, who served as a company commander during the 1968 Tet Offensive in Vietnam and was later activated from the reserves during Operation Desert Storm and promoted to brigadier general.
Other profiles include those of Navy sailor Ben Bishkoff, who served during the Vietnam era, and William “Billy” Kraft, who served in the Army, in the Navy SeaBees and the Air National Guard. Shoemaker also told the story of Army Col. Claude Schmidt, a former tank commander who founded Veteran’s Last Patrol, which supports veterans at their end of life.
“The thread that runs through all these stories is that military training will change the lives of all these soldiers for the better,” Shoemaker said.
Many of Shoemaker’s stories were incorporated into Town Manager Marshall Labadie’s “Manager’s Minute,” and the town is putting the finishing touches on a new page on the website that will include personal profiles of the “Heroes of Highland Beach.” The page will include key contact information for veterans organizations, links to veteran services, announcements and important calendar dates.
“These are all heroes in our midst that people should know about,” Shoemaker said. “It’s great that these people are getting the recognition they deserved.” 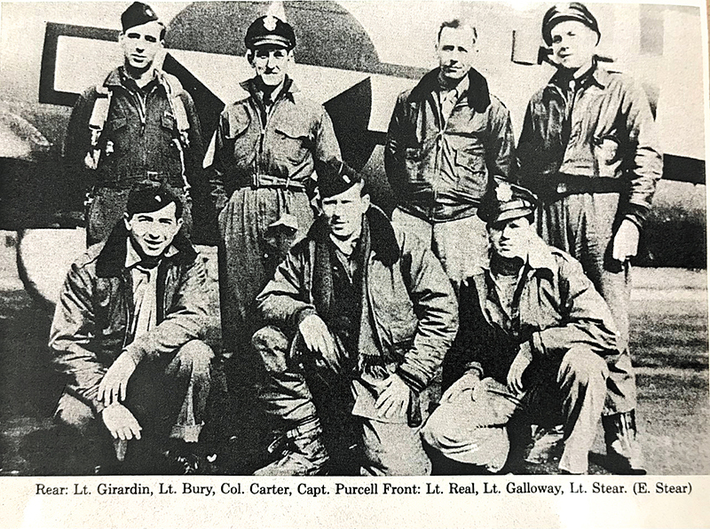 Bury (in rear, second from left) with his B-17 squadron during World War II. Commissioner John Shoemaker has written profiles of Bury and other veterans in town. Photo provided

Shoemaker said there are also plans to build a memorial that will honor the town’s veterans, many of whom will have stories like those Bury easily recalls.
A resident of Highland Beach for almost 40 years, Bury survived the 1945 flight, although a piece of flak landed right in front of him and blew his walking shoe “right past my ear.”
With the gas tank full of holes and the landing gear disabled, the crew was concerned about returning to England safely.
“We weren’t sure we could get back to base,” Bury said.
The bomber did make it back and Bury returned to civilian life, eventually becoming a vice president of marketing for Purolator.
Bury and his wife, Shirley, have been together for close to 74 years and have four children and several grandchildren and great-grandchildren. Until recently, Bury volunteered on a regular basis at St. Lucy church, helping out in the office.
To celebrate the milestone birthday, Bury plans to gather with family from the area and later with family from all across the country.
His secret to longevity, he says, is simply eating right and staying active.
“Shirley watched our diet and I exercised daily for about 50 years,” he said.