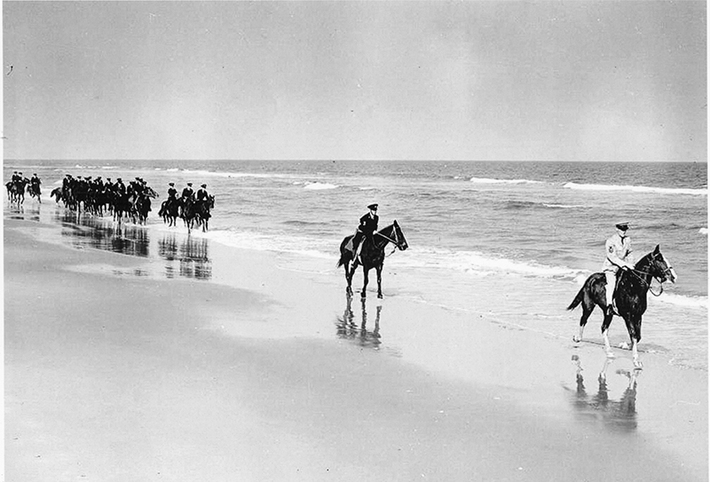 It was a time of turmoil throughout Europe.
In the late 1930s, the German army was beginning to steamroll across neighboring borders, occupying nations with relative ease. Soon after — in the early 1940s — the systematic murder of European Jews and others had begun.
At about the same time, Allied forces — including troops from the U.S. — were on the front lines as World War II spread throughout the continent.
Here at home everyday Americans felt the effects of the war on the other side of the Atlantic and did whatever they could to support the effort. In Washington, government leaders struggled to address the pleas for refuge from terrified European Jews.
This month, two public Delray Beach historical exhibits provide insights into what was happening in the United States at the time, one focused on Delray Beach efforts to support U.S. involvement in World War II and the other looking at the U.S. government’s response to Nazism and genocide.
Tied to both exhibits is an effort to bring stories of local veterans to life through banners hanging on light poles in downtown Delray. The banners highlight several who served in the six most recent war periods, dating to the second World War.
At the Delray Beach Historical Society’s new “Delray Beach: WWII Homefront” exhibit, rare photographs and newspaper clippings from the archives and artifacts come together to tell the story of what took place in the city during the war.
“It was a terrifying but unifying time,” said historical society Executive Director Winnie Edwards. “Everyone did their part.”
The exhibit also includes family stories of local troops, as well as two films — one about the Boca Raton Airfield and the other about African Americans in the war. Compiled by the museum staff, the exhibit explains how residents were recruited to patrol the beach on horseback to look out for enemy boats and planes, and how other residents took to the towers of the beachfront Seacrest Hotel to serve as spotters.
The exhibit provides a better understanding of the nighttime blackouts that residents were required to observe and highlights supporting efforts here, including scrap metal drives, blood drives, bandage-making efforts and USO gatherings for both Black and white troops during segregation.
“This is a very localized exhibit,” Edwards said. “It’s about Delray soldiers, Delray stories and what it was like to be here during World War II.”
The exhibit, she said, demonstrates how a community rallied to meet a common threat.
“The lesson of World War II is that people really came together,” she said. “We’re hopeful that those who see the exhibit will leave understanding that coming together is a great way to move forward.”
The exhibit is open Tuesday through Saturday from 11 a.m. to 3 p.m. at the Cason Cottage, 5 NE First St., and runs through March. Admission is $5, but there is no entry fee for veterans and students.

U.S. during Holocaust years
Just a short distance away, the Delray Beach Public Library is hosting “Americans and the Holocaust,” a traveling exhibit from the U.S. Holocaust Memorial Museum and the American Library Association.
The exhibit provides little-known information about American government policies toward Nazism in the late 1930s and immigration policies in response to requests for refuge from those fleeing Europe. It is based on an exhibit that opened in April 2018 at the Holocaust Memorial Museum in Washington, D.C.
“‘Americans and the Holocaust’ explores four main questions,” said Isabella Rowan, the Delray library’s program coordinator and volunteer manager who led the effort to bring the exhibit here and is coordinating several related programs. “What did Americans know, did Americans help Jewish refugees, why did Americans go to war, and how did Americans respond to the Holocaust.”
On display on the first floor of the library, the exhibit includes four interactive video kiosks and includes newsreels from the time and information from other primary sources.
“This exhibition will challenge the commonly held assumptions that Americans knew little and did nothing about the Nazi persecution and murder of Jews as the Holocaust unfolded,” Rowan said.
The exhibit raises questions about U.S. policies toward refugees, questions that remain relevant today.
“This exhibit presents little-known facts about America and Americans during this time in history,” Rowan said. “It’s a great opportunity to learn more about this country we call home.”
The library, Rowan said, is the ideal place for this exhibit because a goal is to educate in a welcoming environment.
“The public library is a neutral place for learning and discussion,” she said. “It is the one place where everyone is welcome and can feel comfortable exploring ideas.”
The exhibit, which runs through Nov. 17, is free and open to the public during the library’s regular hours.

Banners with stories
People walking past the library or driving downtown in November will see banners recognizing veterans from Delray Beach and the surrounding area. The banners have been placed by Veterans & Homefront Voices, a nonprofit that works with cadets in local high school JROTC programs to help tell the stories of veterans.
“Our goal is to empower veterans and those who served as the homefront for deployed troops to be seen, heard and understood by their community,” said Conrad Ogletree, the organization’s founder. “We enable the community to see, hear and appreciate their local veterans and homefront members.”
Ogletree said that by Nov. 11, Veterans Day, 39 banners will hang throughout downtown, many of which will have a statement from the veteran as well as a QR code that viewers can use to learn more about the individual on the banner.
Some of the audio recordings will include interviews of veterans by cadets, including those from Atlantic High School’s JROTC program, who will also be part of a Veterans Day ceremony at Veterans Park.
“We’re hoping that when people see the banners on Atlantic Avenue that they’ll stop and read them, and they’ll see something in that legacy statement that they’ll want to apply to their own lives,” Ogletree said.