Retired Lt. Col. Mel Pollack at home in Boca Raton with a replica of the F-4 Phantom he flew in Vietnam. Tim Stepien/The Coastal Star

Although retired Air Force Lt. Col. Mel Pollack’s military service ended decades ago, his commitment to service and veterans has endured.
Pollack was on his 78th combat mission flying an F-4 Phantom when he was shot down and captured by the North Vietnamese in 1967. He was imprisoned in the infamous “Hanoi Hilton” with John McCain, then a Navy pilot, later a U.S. senator whose funeral services riveted the nation in late August and early September.
Freed after 2,068 days as a prisoner of war, Pollack remained with the Air Force, retiring after 20 years of service. He then held various corporate positions and eventually moved from Delray Beach to Boca Raton four years ago. He now is vice chairman of the Boca Raton Airport Authority board.
This year Pollack became president of the Boca Raton-based nonprofit Vets Helping Heroes, which provides trained service dogs at no cost to active duty military members and veterans who are physically or psychologically injured.
Pollack, 76, has been active with the group since it was founded in 2007. He took on the role of president after the January death of his predecessor, Irwin Stovroff, a World War II veteran who spent 13 months in a Nazi POW camp after his plane was shot down.
“When you see what these service dogs do to improve the quality of life for the veteran, it can bring tears to your eyes,” Pollack said.
The organization is badly needed because “there is no federal program that will provide service dogs,” he said.
Their training is expensive. It totals $15,000 for a post-traumatic stress disorder dog, and $60,000 for a guide dog for the visually impaired, Pollack said.
Vets Helping Heroes has raised more than $7 million and placed more than 300 trained dogs. Donations have come from all over the country, he said, and 92 percent of the money is spent on dog training.
As president, Pollack wants the all-volunteer board of directors to take a more active role in the organization, and he is working to increase grant requests and expand public relations outreach nationwide to boost the amount of money Vets Helping Heroes raises.
“Our goal is to keep growing,” he said. “We haven’t put a percentage on it. We want to provide dogs to as many disabled veterans as we can.” 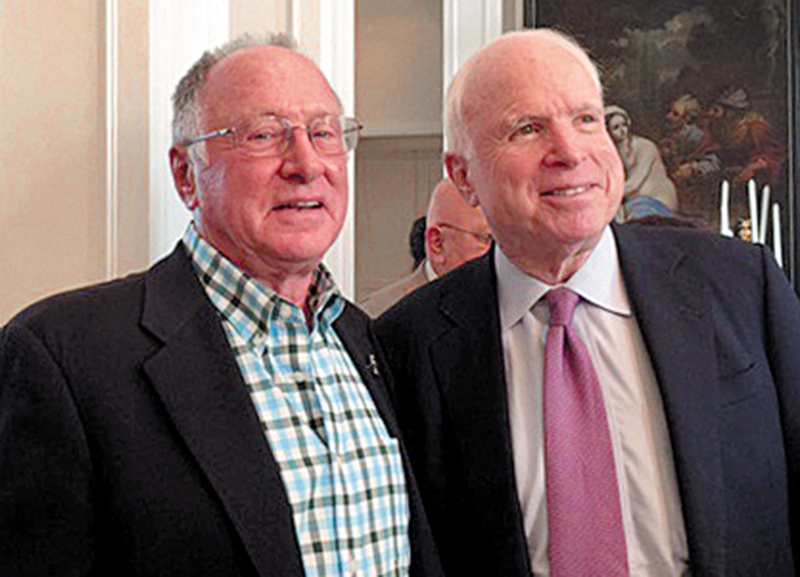 Imprisoned with McCain
Pollack graduated from New York University and joined the Air Force with the intent of learning to fly so he could eventually become an airline pilot.
He was 25 when his plane was hit by antiaircraft fire north of Hanoi on July 6, 1967. Pollack ejected from the plane and suffered back injuries when he slammed into a mountaintop. He was immediately captured.
Conditions at Hua Lo Prison, sarcastically dubbed the Hanoi Hilton by service members, were “awful” and his captors’ treatment of the POWs was “brutal,” he said.
“Our captors thought we had all the secrets of the American military,” he said. “They didn’t realize once we hit the ground, our war was over.”
He and the other POWs had no knowledge of future intended targets or new policy and tactics, he said.
Food was minimal. Medical attention was almost nonexistent. Pollack lost 35 pounds.
“They kept us alive because we were their ransom for the future,” he said. “We were worth something.” A framed photo of Pollack shaking another officer’s hand in 1973 after Pollack’s release from the Hua Lo Prison. Photo provided

Their isolation was near total. They rarely left their cells, which usually housed four men, and the only outside “news” they heard came from two radio propaganda broadcasts each day.
To stave off madness, Pollack said, he thought about his life over and over again and talked to the other men.
They created clandestine communication systems to talk with prisoners in other cells. When these were discovered, punishment was swift and harsh. “We all have the mental and physical scars to show for it,” he said.
One system was to wrap a metal drinking cup in a towel to muffle sound and put the cup against the brick wall. A prisoner in an adjoining cell would do the same, allowing the two to hear each other. That was how he first communicated with McCain.
“We talked about everything, your life, personal aspirations,” he said.
More recent POWs would tell about the status of the war, news from outside and what was happening in the United States.
Word eventually spread that McCain’s father was a four-star Navy admiral.
Even so, “he was just John. He was just another guy trying to survive.” Pollack said.
The two came to know each other “pretty intimately.”
He and the other men knew McCain, then a 31-year-old lieutenant commander captured on Oct. 26, 1967, and badly injured, had refused an offer of early release. Many of the other POWs got the same offer, including Pollack, and also refused, he said.
“The only reason they offered the release was for propaganda value,” he said. McCain “would not play their game. As battered and wounded as he was, that was a very strong thing to do.”
In exchange for early release, interrogators wanted the POW to sign a letter admitting to committing war crimes and asking the people of North Vietnam for forgiveness.
“I told my interrogator, I am sorry I cannot do that,” Pollack said. “We had to uphold the code of conduct.”
Pollack finally met McCain face-to-face just prior to his release on March 4, 1973, after they were told the war was over and their captors let them out into a courtyard. McCain was released 10 days later.
“He once made a comment to me that my humor helped save his life,” he said. “That was very touching.”
The two men stayed in touch through reunions of members of the NAM-POWs veterans organization, and when Pollack would visit Washington, D.C. The last time they saw each other was in 2016, when McCain was in Boca Raton for a fundraising event for his U.S. Senate re-election campaign and they spent an evening together.
McCain’s funeral services amazed Pollack. He described them as “a week that outdid any president or head of state or royalty.”
“He deserved it,” Pollack said. “And it shows how much this country is looking for leadership today.”