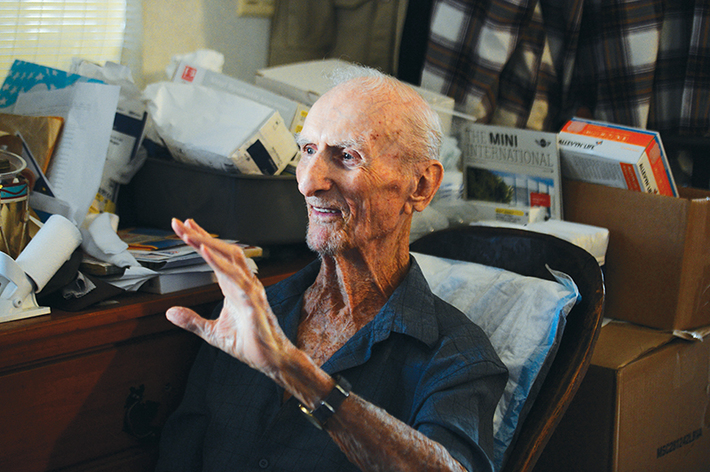 Ed Manley, who parachuted into Normandy on D-Day in World War II, retired to Briny Breezes 29 years ago, and Nov. 5 marked his 100th birthday. Photos by Jerry Lower/The Coastal Star

Everybody wants to know, Ed. Tell us how you got to be 100.
But Ed Manley just laughs.
“How would I know how I got to be 100?” he exclaims. “I was stupid! I never grew up!”
Manley is the sort of garrulous old-timer who speaks in exclamation points. He remembers parachuting into Normandy on June 6, 1944, better than he remembers what he did the day before yesterday, but he’s still here, alive and lively, chattering away in the Briny Breezes trailer he bought as a young man of 71.
On Nov. 5, he expected to join roughly 97,000 other Americans who have survived for a century.
How did you do it, Ed?
Manley does his best to scrounge up some advice.
“Don’t eat so much,” he cautions. “People eat too much beef. I prefer fish.”
Anything else?
“Well, I never drank to get drunk,” he says. “I drank as much as the other guys, but I spread it out.”
Though he tells you he never grew up, the truth is, Ed Manley grew up many times. He had to.
He was born on Nov. 5, 1921, two months after his father died. At 3, he was sent by his single mother to live with a babysitter in New Jersey until he was 5, when he arrived at an orphanage in Harlem.
“They used to give us two nickels every Wednesday to go down to the YMCA on the trolley,” he once recalled, “and I’d hang on to the back of the trolley to save the nickels.” Manley’s old World War II uniform is a history of his service along with other honors received over the years.

Another survivor from Company F
At 20, he joined the “Screaming Eagles” — the 101st Airborne Infantry Division’s 502nd Parachute Battalion, Company F, as a private.
Just after midnight on D-Day, he parachuted into Normandy, part of an 11-man team charged with blowing up four German cannons overlooking Omaha Beach.
That September, he jumped into Holland, fighting to take roads and bridges in the city of Eindhoven.
In December, he fought in the Battle of the Bulge against Hitler’s 5th Panzer Army. And on Jan. 3, 1945, Manley was wounded in Bastogne, Belgium, captured and taken to Stalag 12A, a Nazi POW camp in Limburg, Germany.
No wonder Dan McBride thought Manley was already dead.
McBride was only 20 when he jumped into Normandy with Company F, then pressed on to Holland and Belgium, earning three Purple Hearts along the way. He’s 97 now, a retired railroad man alive and well in Silver City, New Mexico.
In 2019, Holland came into McBride’s life again when a lieutenant colonel in the Royal Dutch Army, Jos Groen, reached out to McBride from his home in Doorn, The Netherlands, to request an interview for his book, Three of the Last WWII Screaming Eagles.
Groen came to Silver City and met with McBride for three days. They became friends, and in September 2021, Groen called again to say he’d found another survivor from Company F, a man named Ed Manley, still alive in Briny Breezes, Florida.
“We were both in Company F, but different platoons,” McBride says. “I didn’t know him then, but I heard he was one of the ones captured in Bastogne.”
What McBride hadn’t heard was that while Manley was being marched toward Berlin to form a human wall against the Allied assault, he and five other prisoners had escaped.
In October, McBride called Manley.
“We talked about 20 minutes, half an hour maybe,” McBride reports. “He told me he got hit in the hip, and what he’d done after the war.”
Manley remembers that McBride was in Company F, but their phone call has already slipped from his mind. The present is vague, the past vivid.

‘I tried to help people out’
“I was happiest when I was married,” Manley says. “I didn’t get married until I was 30.”
Dorothy Ann Manley died in 1983 after 32 years of marriage.
“She was the only woman I really respected,” he confesses. “Most women get together and talk about clothes and, you know ladies’ stuff, but she would rather sit with a bunch of guys and play liar’s poker.”
He points to a funeral urn on the shelf. “She’s still with me.”
Now one more bit of advice.
“I don’t have any credit cards,” he reveals. “I write checks. That way if I die, the kids aren’t stuck with the bills.”
He and Dorothy had three children, Scott, James and Kimberley. Scott is a pastor in Washington state, Kimberley died in 2015 at 58, and Manley has no contact with James.
Ask what he’s proudest of in his 100 years of living and Manley hesitates.
“Most people go to church,” he decides. “If someone was beating on you and you couldn’t defend yourself, I found a way to help you out. Most people go to church; I tried to help people out.”
Manley’s son Scott and his grandson, Jered, planned to be here for his birthday, when Brenda Dooley and a few other friends in the park scheduled a small party in the clubhouse. He’ll have 100 cupcakes, one for every year so far, with a sax player blowing his beloved Big Band tunes, and red, white and blue decorations in honor of his heroism.
“And his table’s getting gold plates and gold balloons to go with the red, white and blue,” Dooley promised.
Meals on Wheels planned to deliver a cake, balloon and a bag of presents, as it does for all its centenarians. Just a few gestures to celebrate Ed Manley’s first century, and ring in his next.
“I don’t want to be around another hundred years,” he says bluntly. “We’ve got people going on the moon now, and we can’t handle Earth. We won’t recognize man in 20 years.”
But then he reconsiders.
“I’d like to see Asia.”
And he laughs.
“I hope you have half as much fun in your life as I’m having.”