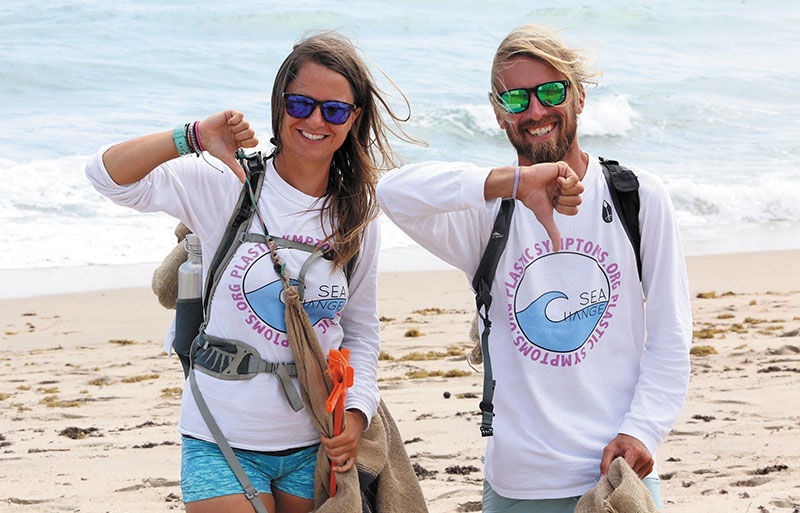 Featured in the May edition of The Coastal Star, Heather Bolint and Bryan Galvin have been walking the coast of Florida to document and pick up waste plastic. Tim Stepien/The Coastal Star

When last we heard from Bryan Galvin and Heather Bolint, the intrepid beachcombers were resting up in Everglades City after an eight-day canoe voyage across the Everglades.
That was on April 29.
Galvin, a former lifeguard at Gulf Stream’s St. Andrew’s Club, and his partner, Bolint, had left Amelia Island on March 1, determined to walk the perimeter of mainland Florida all the way to Pensacola.
They would pick up plastic trash along the way, educate anyone willing to listen about the plague of unsustainable plastic bottles, etc., threatening our beaches. And they would reach Pensacola by June 30.
PlasTrek 2019, they call it.
On May 24, we reached them in Manasota Key, about 37 miles south of Sarasota.
“The Gulf Coast isn’t so badly polluted as the east coast,” Galvin reported. “The beaches are cleaner. But some cities rake their beach every day with a tractor, so the plastic is still washing in.”
Before crossing the Everglades, the couple took a three-day break. In Key Biscayne, they spent $1,000 on a little sleeper trailer they could pull behind their truck, then left the truck, trailer and about 80 burlap bags full of plastic trash with friends in Delray Beach.
Now they’ve retrieved the truck and walked the 95 miles from Everglades City to Manasota Key, filling another 10 bags.
“Our next goal is St. Petersburg,” Galvin said. “We have a beach cleanup scheduled there June 1 with a local group called 1 Piece Each.”
Yes, he said, he and Bolint are still speaking to each other.
“There’s some great, amazing, fulfilling days, and then some days when we don’t know why we’re doing this,” he confessed. “Some nights we sleep on opposite sides of the bed. But then we meet some people who cheer us on, and we remember why we’re doing this.”
Are they still on schedule to reach Pensacola by June 30?
“I’m not sure. We’re still hoping for the end of June. We don’t want to be trekking the whole summer.”
He paused.
“Let’s say by July 1.”