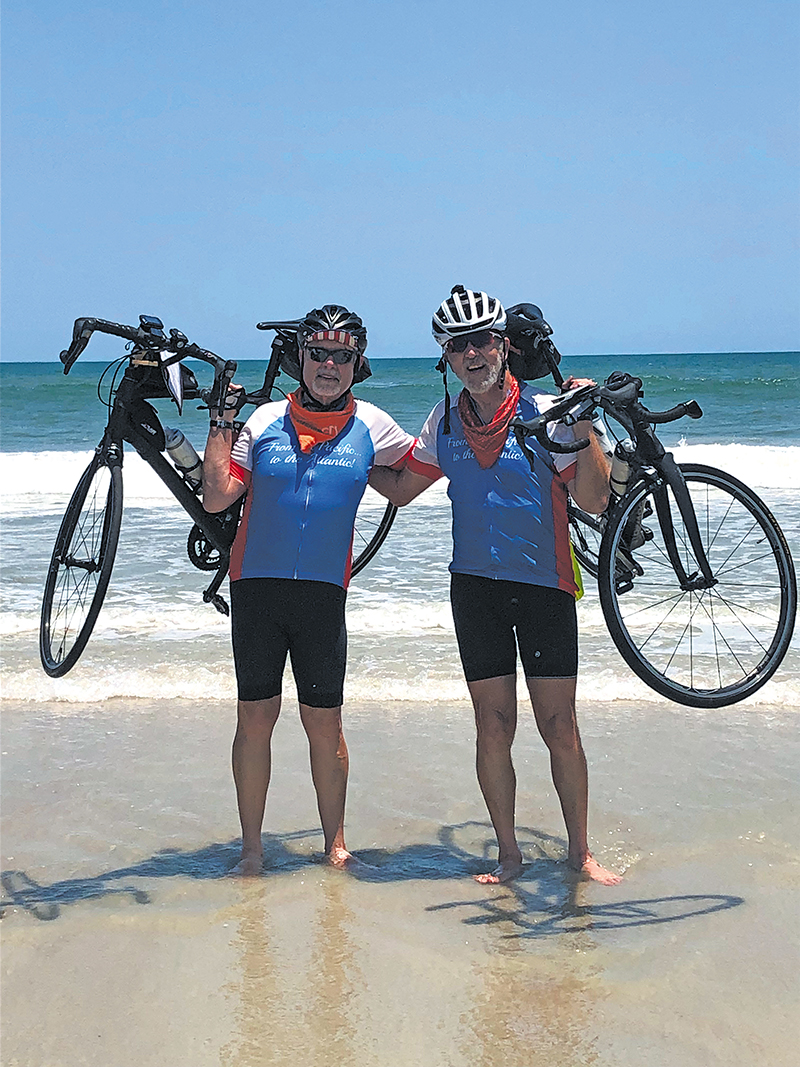 Featured in the April edition of The Coastal Star, Ray Charley (right) celebrates the end of his cross-country ride with biking partner Roberto Cintron. Photo provided

Part-time Ocean Ridge resident Ray Charley completed the 3,050-mile Ride Across America in Support of Our Veterans bicycle ride on May 18. It was 48 days from San Diego to St. Augustine through deserts, mountains, back roads, cold weather, sweltering heat and thunderstorms.
But to hear Charley reminisce about the challenge, it seems as if he were taking a late-afternoon ride on A1A because he had help — lots of it.
He got spiritual assistance from his wife, Kate, who gave him a necklace with the Lord’s Prayer on it. Roberto Cintron, a fellow rider from Miami, presented him with a bracelet with TGBTG (To God Be The Glory) engraved on it.
He got emotional aid by holding his newborn granddaughter the day before the ride began. He was certain his daughter would give birth after he left on the ride, which would have delayed his seeing the baby for at least 48 days.
But the biggest assistance came from his riding companion Kip Othold. They formed a bond likely to last forever. They rode together, bunked together, wrecked together, laughed together, suffered together and gave each other nicknames.
“I was really fortunate that Kip and I became close friends,” said Charley, who turned 68 during the ride on May 1. “We were lucky that we had the same ideas about how to ride and what we wanted to do on the ride, so it made it really enjoyable — special. We were both saying ‘this isn’t a race, this is a ride, so let’s take our time and enjoy every day.’”
“We were joined at the hip,” said Othold, a 67-year-old retired auditor from Houston. “We were together 24/7 for 48 days. … Most marriages can’t handle that. We got along like brothers. In fact, better than my brother and I get along.”
They took nicknames from the Western series Lonesome Dove. Charley was Woodrow (Call, played by Tommy Lee Jones) and Othold was Gus (McCrae, played by Robert Duvall).
“We were the two older guys riding across the nation,” Charley said, “and we thought this could be our last drive.”
“I had to explain Woodrow to him,” Othold said, “because he had never seen the show.”
They had two minor wrecks — with each other. On the third day, Othold had pulled off the road to check his tire and looked up and saw Charley riding hard toward him with his head down.
“He ran right into me,” Othold said. “He knocked me down and he also went down and hurt his elbow.”
The second wreck occurred when they touched wheels going up a hill. Both went down, and Othold got a gash above his left eye and had to wear a patch for a day. That night Charley came to dinner wearing a patch on his left eye.
“He called it a sympathy patch,” Othold said. “The next day all 14 riders began the day with patches on their left eye.”
“There was not a day that did not offer a challenge,” Charley said. “I loved every moment of it. It was hard. At times I thought ‘what am I doing here?’ and ‘how am I going to get through this?’ but every day we got up and just ran into the day. Every day was a great adventure.
“I probably will put more miles on my bicycle this year than on my car.”
Charley, who with his family owns three Shop ’n’ Save supermarkets in Pennsylvania, was riding for the Troops First Foundation, which helps veterans suffering from post-traumatic stress disorder. At ride’s end he presented the group with a check for $73,600. The entire 14-person riding group sponsored by Trans-America Cycling raised approximately $150,000 for various charities.