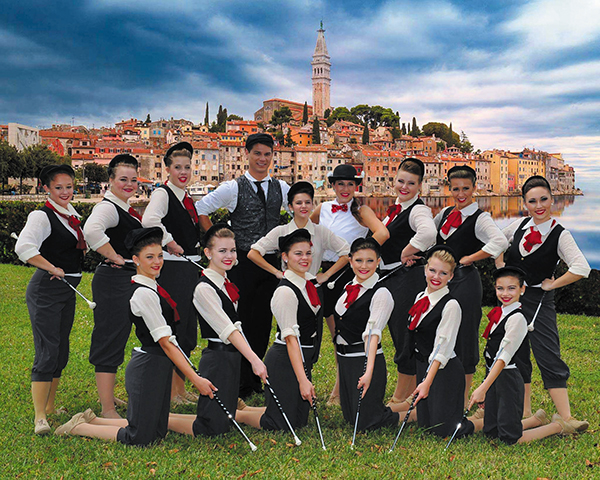 When Curt Burrows, 23, faces the performance floor during a twirl competition, he knows he needs to do one thing — calm his overwhelming sense of nervousness.
“The biggest fear is dropping the baton,” the Boynton Beach resident said.
From Aug. 2 to 12, Burrows and 15 other members of the South Florida Dynamics are taking part in the Grand Prix International Competition and the World Baton Twirling Federation’s International Cup contest in Porec, Croatia.
Team members, ages 13 to 25, traveled with their coach, Jeanne Chwalik, to Europe for the competition.
The Dynamics, based in Delray Beach, frequently participate in local events such as the holiday parades. They have performed on the Triumph and Imagination cruise ships and have entertained at Disney World, Universal Studios, a Miami Dolphins football game, an Orlando Magic basketball game, a Miami Heat basketball game, the Macy’s at Universal parade, FAU football games and the Citrus Bowl Parade.
Even though the group has competed internationally before, this is the first time the group was chosen to represent the United States Twirling Association in the Grand Prix competition.
The team traditionally has competed one level below elite — the highest level — but now is up against top-ranking teams from countries around the world.
For Carly Finkel, 22, the Grand Prix is a big deal because it has no restrictions on tricks. Team members can make their moves as fancy and as complicated as they want to get.
They spent their last days of practice before the event perfecting those maneuvers, which combine gymnastics with twirl.
“This is a little bit of pressure because we were chosen,” said Finkel, of Boynton Beach.
Chwalik, who has coached twirl for 60 years, said the team could move from advanced to elite if it does well. The competition is tough because the Japanese teams scored a perfect 100 from every judge during the last International Cup.
“They were the only ones to do that,” she said.
No matter what the team accomplishes during the prestigious competition, Chwalik said it’s been amazing to watch the hard work.
“I am proud of what they’ve become as a team and as young, responsible individuals,” Chwalik said.
Staying focused to reach their goal of bringing home a medal is important, said Burrows, who won a gold medal for twirling three batons at the 2015 International Cup.
He said it’s all about concentration and poise.
“If you drop (the baton), you just got to pick it up and pretend it didn’t happen. Don’t let it affect the rest of the routine and just put on a show.