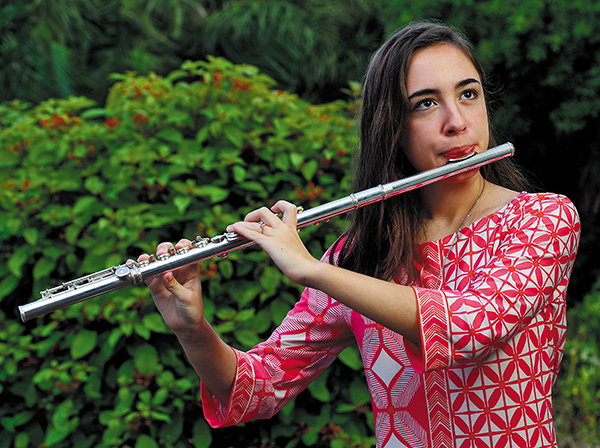 Residents and friends arriving for the annual holiday celebration Dec. 1 found something missing from Ocean Ridge Town Hall.
The tree was trimmed, the halls were decked and the feast was spread; but where was the traditional CD player that had jingled bells, let it snow and brought joy to the world as long as anyone could recall?
This year, the crackling fire blazing on the screen behind the commissioners’ rostrum was fake, but the classical string quintet serenading the crowd was very real.
Appassionato, as they call themselves, are an ensemble of young, talented musicians fast approaching the line between amateur and professional.
As the partygoers greeted each other, nibbling on sandwiches and chicken wings, sugar cookies and carrot cake, Appassionato slipped from Silver Bells to Jingle Bells to Santa Claus Is Coming to Town.
Kimberlee Marshall, president of the Ocean Ridge Garden Club, watched them, impressed.
“To have a classical string quintet to launch us into the Christmas spirit,” she marveled. “Whoever thought of it was brilliant.”
Actually, the piano and flute were locally grown.
Rebekah Laflin, 15, was born and raised in Ocean Ridge and began studying piano at 10.
“But I didn’t get really serious until a couple of years ago, when my grandparents offered to buy me any instrument,” she says. “And I picked flute.”
Since then, she’s appeared with the Honor Band of America, the Florida All-State Concert Band, and was chosen to participate in the Eastman School of Music’s Artistic Flutist Camp. She studies at the King’s Academy Conservatory of Music, sitting first chair in the symphonic band’s flute section.
Appassionato was born when Laflin met the Savage family at Grace Presbyterian Church in Stuart, which she attends. The three brothers and a sister were already seriously into serious music.
They began playing casually in the hours between the morning and evening services at church, honing their talents over five or six years.
Appassionato is:
Shane Savage, 16, string bass.
A member of the Treasure Coast Youth Symphony for the past six years, he’s performed with the Philadelphia Symphony at Carnegie Hall, and played with the Florida All-State Concert Band for five years, as well as Music for All’s National Honor Orchestra in Indianapolis.
Adam Savage, 13, viola.
He’s studied since he was 8, has led the viola section of the state concert band for the past two years and has won the Florida Association of Christian Colleges and Schools solo competition award for four consecutive years.
“I chose the viola because I think it’s the warmest sound,” he says, “right in between the violin and cello.”
But Jenni Savage, the brothers’ mother, has a different explanation: “We couldn’t fit two string basses in our trunk.”
Bobby Savage, 22, violin.
A member of the Treasure Coast Youth Symphony for five years, his first love is bluegrass music, and he leads a music ministry at the Stuart church.
And then another friend joined the band.
Zach Hoffman, 17, violin.
“My sister, who’s three years older than me, began playing violin when she was 4,” he recalls, “so when she was 7 and I was 4, I saw that she was getting a lot of attention.”
A student at Morningside Academy in Port St. Lucie, he’s been studying the violin ever since.
“We call each other cousins,” Rebekah Laflin says, “but we’re not really.”
As the group ­–Appassionato is the musical directive to play with passion – honed its talents at church, it began playing free gigs at weddings and funerals, cocktail parties, fundraisers, religious gatherings, even a quinceañera party.
If you want a bit of Bach, they’ll give you the Air on a G String. They soar with Holst’s Planets, soothe with Pachelbel’s Canon. They can handle Handel, bluegrass and the Beatles, too.
“Our first paying gig was at a Jewish wedding in Stuart last month,” Shane Savage says. “Zach’s sister knew the family, and they wanted baroque, so we played a lot of Bach and Handel.”
Then he remembers that paying musicians have to sell themselves, and adds: “But we can do Going to the Chapel too, if people want that.”
At the Ocean Ridge holiday party, sister Kimmy Savage, 8, filled in for Zach Hoffman, who was home cramming for a college entrance exam the next morning. Her relative youth was no impediment.
Kimmy played cello and sailed through O Tannenbaum and O Little Town of Bethlehem so smoothly that the loyal CD player of holiday parties past was all but forgotten.
“It’s a world apart from a CD player,” said Police Chief Hal Hutchins. “It makes the room.”
Mayor Geoff Pugh agreed.
“It’s wonderful,” he beamed. “It adds a really special touch to the whole gathering. It’s exactly what we needed.”

The Appassionato Ensemble can be reached at SiempreAppassionato@gmail.com or 772-932-9341.