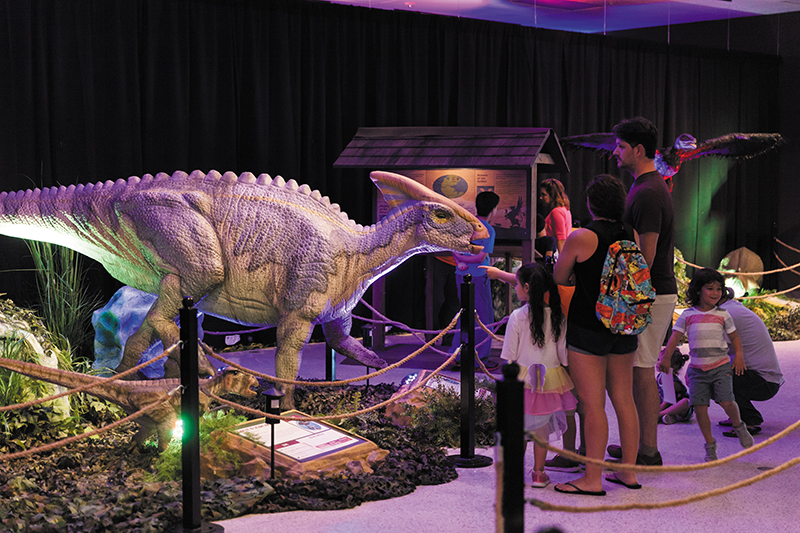 They’re back! There are more of them. And they look hungry!
Twenty animatronic dinosaurs have returned to the South Florida Science Center for a bigger, badder exhibition of prehistoric creatures in “Dinosaur Invasion,” on display through April 21.
Imagine Earth 65 million years ago, when these monsters roamed the planet. The exhibit isn’t speculation. These are scientifically accurate re-creations of triceratops, raptors, Tyrannosaurus rex and the giant Spinosaurus, for example.
Some are too big to fit inside the museum — the Spinosaurus and T. rex could grow to 45 feet long — so you’ll find them lurking outside.
These aren’t skeletal remains or hollow plastic shells. These dinosaurs have new technology and new skills. They’ll be scanning you as if you were prey. Get close, you’ll hear them roar.
Melinda Grenz, the director of marketing at SFSC, says the public’s passion for these mysterious creatures hasn’t waned. If anything, she says, people are more interested.
“Dinosaurs are probably the most popular of all exhibits. They always break attendance records,” she said. “All ages and types of people come to see them.”
Even people who have seen the previous dinosaur exhibits come back again to see what’s new.
Visitors will be impressed, Grenz said, because the dinosaurs “are more realistic than ever.”
Dinosaur expert Robert DePalma, a native of Boca Raton, can trace his love of science and dinosaurs back to a visit to the SFSC, then the Science Museum, to see Suzie the woolly mammoth when he was a kid.
Today, DePalma is the curator of paleontology at the Palm Beach Museum of Natural History and he’s sort of the dinosaur “quality control” guy. He makes sure the exhibit’s dinosaurs are represented in accordance with science.
“There’s still so much we still don’t know,” Grenz said. “Paleontology is a growing science.”
Grenz said the animatronic dinosaurs can be a little scary — she admits to getting a few goosebumps when she walks past them on her way to her car after work — but kids warm up to them quickly.
The exhibit sheds light on some of the newest findings, including recently discovered dinosaurs. And dinosaurs, rather than being slow and stupid, were actually smart creatures, experts have found.
Lately experts have been arguing about whether T. rex was more like a bird or a reptile. They think he might have been born covered with feathers.
There’s a lot still to be learned from dinosaurs about what Earth was like all those millions of years ago, how the tectonic plates shifted, tearing the continents apart.
The museum has several programs planned in association with the exhibit. They include:
Night at the Museum: Jaws, paws and claws from 6 to 9 p.m. Feb 22 will touch on the dinosaurs’ deadly strength.
DinoFest: Meet DePalma from 10 a.m. to 3 p.m. March 9 at his meet-and-greet during DinoFest.
The South Florida Science Center and Aquarium is at 4801 Dreher Trail N., West Palm Beach. Admission is $17.95 for adults, $15.95 for age 60+, $13.95 for ages 3-12 and free for kids younger than 3 and for members.
For more information, call 832-1988 or visit fsciencecenter.org.

High school poetry awards
A future poet laureate might be attending high school here, and you might find this gifted wordsmith at the Palm Beach Poetry Festival coming to Old School Square in Delray Beach this month.
The best place to look? At the awards ceremony for the winners of the high school poetry contest, at 5 p.m. Jan. 21 in Crest Theatre at Old School Square, 51 N. Swinton Ave., Delray Beach.
Winners were selected from submissions by students of Palm Beach County high schools. The winner will receive $200 and four runners-up will receive $100.
For more info, visit palmbeachpoetryfestival. org.