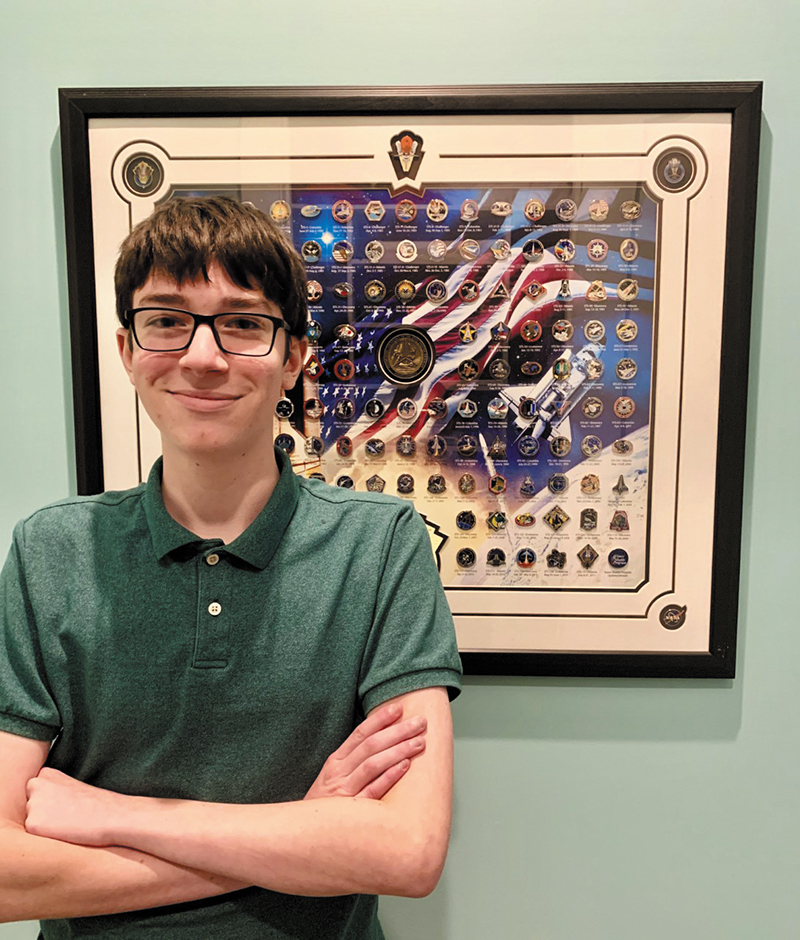 On the Cane family’s homepage under 15-year-old Connor Cane’s name is a quote by Albert Einstein: “Curiosity has its own reason for existing.”
The reason, says George Torok, who posts insights on creative thinking on www.creative-problem-solving.org, is that “curious people learn more, discover more and change things. If you want creative people — look for curious people. They ask the questions about things that others ignore.”
And Boca Raton’s Connor Cane is curious about a lot of topics: the space program and missions to Mars, epidemiology and the threat of antibiotic-resistant superbugs, underwater robotics that can explore unseen worlds, precision drone-flying, bike racing and scuba diving. He also enjoys chess.
From July 21 to Aug. 5, Connor’s curiosity will take him to United Space School in Houston to represent the United States in an advanced, international program that will challenge students aged 15-20 to plan a simulated mission to Mars — with the help of NASA engineers and scientists.
Connor is one of only 50 fertile minds from around the world to be hand-picked from thousands of applicants in an arduous process that included writing an essay and excelling at a Skype interview with seven NASA engineers.
During the program, Connor hopes to work on the team that will design ground operations. Other students will be charged with the flight, and Connor’s team will make the mission viable. “I want to work on the team designing the habitat once they get onto the planet,” Connor said.
It’s not Connor’s first connection to the space program. In 2012, he won an essay contest at the South Florida Science Center in West Palm Beach that earned him the opportunity to speak with Japanese astronaut Akihiko Hoshide on the International Space Station while it was passing overhead at more than 17,000 mph.
Connor is an alumnus of the U.S. Space Camp in Huntsville, Ala., where he simulated astronaut training. More important than the science, which for Connor is super-fun, he took away lessons in leadership and teamwork. These days, people skills are just as critical as a sharp mind.
Connor is currently sharpening his mind in an accelerated pre-collegiate program at FAU’s Dual Enrollment High School/University in Boca Raton. When he graduates, probably around 2022, he’ll have a high school diploma and a bachelor’s degree. He hasn’t chosen a major yet because his interests and skill set are so diverse, it’s like trying to pin down a hummingbird. Or, in the case of the space school, a flock of 50 hummingbirds.
In June, before heading to Houston, Connor went to Tanzania in Africa to work on a research project at Gombe National Park. He planned to join the technology team for a research project on a new species of monkeys. He hoped to capture enough images of individual animals to create a facial recognition algorithm for the head researcher.
It’s more proof that Connor is a deep thinker capable of so many things. “I like to work as part of a team to put together ideas, check each other’s work, avoid mistakes,” he says.
Because the stakes are high — life and death — in space.
But the stakes are high on earth, too. Connor’s other arena is solving the superbug threat and changing how we treat diseases. “I try to balance them both, but if I had to choose, I’d choose biomolecular engineering,” he says.
Specifically, Connor wants to find new ways to fight diseases, some of which have the potential of becoming the next Black Death. The bubonic plague caused by the bacterium Yersinia pestis killed 60 percent of Europe’s population and 50 million people worldwide in the 14th century, before antibiotics.
Today’s medical treatments are working toward fighting bugs by using other bugs, tiny bacteriophages, viruses that kill the bacteria that cause the deadly infections.
Phages work a little bit like our own immune systems, but “one key difference,” Connor says, “is that the immune system gets overwhelmed over time and phages get stronger.”
It’s fascinating, cutting-edge stuff, but there’s a bigger purpose.
“Ultimately,” Connor says, “I want to save lives.”
Connor is the son of Dan and Deb Cane of Boca Raton. Dan Cane founded the data company Modernizing Medicine in 2010 with Palm Beach County dermatologist Dr. Michael Sherling.
The company is usually described as an electronic medical records provider, but it’s really an iPad compatible system designed to lower health care costs and improve outcomes. Cane’s first successful venture was Blackboard, an e-learning tool used by universities, which he sold in 2011 for $1.6 billion.
Dan and Deb Cane have two other children, Elizabeth and Anya, and are well known for their generous financial gifts to local nonprofits like the South Florida Science Center and Aquarium, and the A.D. Henderson University School.