Rob Bonoit, a recipient of House A Vet services who is now a volunteer, met with Kevin Donahue, director of House A Vet, and Mia Bonutti to make the formal exchange of the RV that Bonutti renovated for a school project. Its new home will be at Phipps Park Campground in Stuart when it’s occupied. When it’s not, House A Vet plans to store it in a warehouse on its site. Photo provided

Mia Bonutti, a senior at Oxbridge Academy and a resident of Manalapan, finally found a permanent home for her remodeled RV.
Bonutti made news in February when she finished the renovation on the once dilapidated, pull-behind motor home as part of her student project.
Her hope was to donate the RV as living space for a veteran without a home. But the plan hit its biggest snag when she tried to give the RV away.
Bonutti didn’t want the RV to be auctioned or sold for cash. She wanted it to be a home for a veteran. Finally, after turning down offers from Louisiana to Lakeland, she found House A Vet in Stuart. The small nonprofit started in November 2013 in Martin and St. Lucie counties with the idea of helping Habitat for Humanity of Martin County build a home for a veteran.
But helping one veteran a year still left others on the streets. According to the Florida Council on Homelessness Annual Report, 2,472 homeless veterans lived in Florida in 2019. National estimates exceeded 40,000.
To help more people, House A Vet started to do free home maintenance for struggling veterans. It has a food pantry that feeds 65 families every week, and weekly “lunch and learns” on topics like healthy eating, positive thinking, budgeting and job placement. It also provides haircuts and other personal services.
In 2018, House A Vet received the American Legion Department of Florida Homeless Veteran Award. All programs are funded through direct donations from the community, without any federal or state money.
House A Vet says having Bonutti’s RV will save the organization about $7,000 annually in hotel room costs.
Kevin Donahue, director of House A Vet, negotiated a deal with Phipps Park in Stuart that the RV can stay rent-free at the campground in exchange for the occupants doing a few hours of work a day keeping the grounds neat.
“I was really impressed with Mia,” said Donahue, who served in the Navy from 1977 to 1981.
House A Vet is able to get about 10 veterans off the street each year, but he’d like to do more. His dream is to purchase a nearby trailer park where he could build a community of tiny homes for veterans. Though that takes substantial cash, Donahue is hopeful. People like Bonutti, he says, encourage him.
Bonutti says she feels like House A Vet is a good fit for her RV. She’s happy that it will be close to Palm Beach County and has plans to visit the site before she heads to the University of Virginia, where she’ll study chemical engineering.
“I’m definitely ready for a change,” Bonutti said. She’s been in classes with 20 students or fewer most of her life. A bigger pond awaits.
When she visited the Charlottesville campus recently, she met the dean, who told her nearly 33% of students studying math and science are women.
“I can’t wait to meet people with similar interests to mine,” Bonutti said, buoyed by the university’s commitment to women in STEM.
At home, Mia’s brother Mark, 16, will take over oldest sibling duties like the complicated carpool pickup of their four younger brothers and sisters.
“He’s already had some experience with the chaos,” Mia said.
House A Vet is in need of volunteers and donations. Call 772-678-8149 or visit www.houseavet.org. 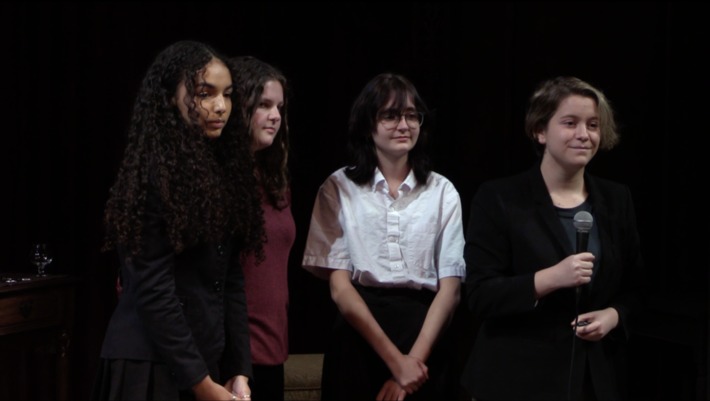 FAU High girls’ project wins Philanthropy Tank award
Four nature-loving students at FAU High School received $10,500 for their community butterfly garden project through the Philanthropy Tank, a nonprofit group that sponsors an annual challenge for high school students in solving social problems.
On April 11, Elise Siegel of Highland Beach, Alyssa Jiggetts of Coconut Creek, and Mallory Thomas and Anna Jarvis of Boca Raton made a presentation of the project they called GNOME — Growing Native Oases Made for Engagement.
GNOME would build and plant easy-to-sustain community butterfly gardens designed to lower people’s stress and add green space. Its secondary purpose is to promote the use of native plants in local landscapes.
The group worked with adviser Adriene Tynes, who spent five years on the board of Community Greening, a collective effort to improve the environment with trees. The students will be mentored by Frances Fisher as they enter the new phase of making gardens happen.
“The presentation went really well. All the preparation was worth it,” Mallory said.
The team filmed a video for National Learn About Composting Day in May to bring awareness to its work. To make GNOME sustainable, the team plans to start a club at FAU High School to carry on the work when the seniors on the team graduate.
For more information on the Philanthropy Tank, visit www.philanthropytank.org.

Delray student wins filmmaking scholarship
After the candidates walked a red carpet at Maltz Jupiter Theatre, the winners of the Palm Beaches Student Showcase of Films were announced on May 6. And when the winner of the Sara Fuller Scholarship was announced, Joseph White of American Heritage School in Delray Beach heard his name.

Most of the film showcase awards recognize individuals for their filmmaking, but the Burt Reynolds and Sara Fuller scholarships are different.
Before Reynolds died in 2018, he played a vital role in the selection process and personally handed out the award each year. Reynolds looked carefully at the applicants’ character as well as their talents and aspirations.
Fuller was a pioneer in Florida’s film production industry, and this scholarship sponsored by Film Florida honors her memory by supporting future filmmakers and encouraging excellence in the field of motion picture education.
For this award, White said, “I submitted a film reel, a letter of recommendation, an acceptance letter from a four-year university, and an essay as to why I think I should be considered for the award.”
The scholarship award is $1,000.
White, 18, who lives in Delray Beach, called the award “an amazing honor.” His parents, Troy and Suzanne, are equally excited about Joseph’s next chapter. He is going to the Savannah College of Art and Design to study film directing and producing.
The Palm Beaches film showcase has been supporting blossoming filmmakers for more than 25 years by providing cash awards, prizes and scholarships to creative students from Palm Beach County, giving out about $20,000 to talented seniors each year.
For more information, visit www.pbfilm.com/ssof.