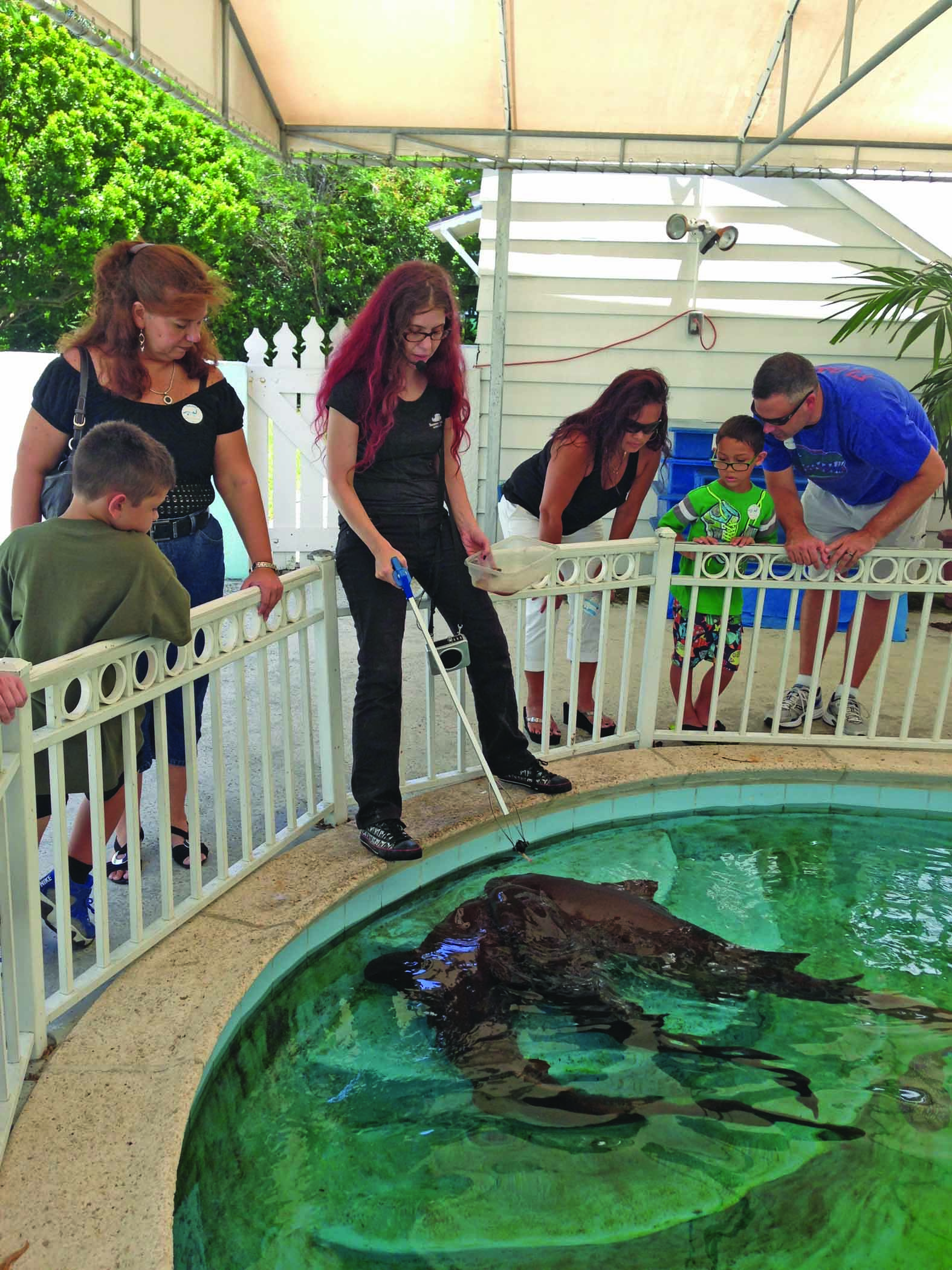 Who needs Sharknado, modern-day megalodon attacks, or a submarine shark lurking off the coast of South Africa? There’s no need for fictitious shark attack “facts” when the real-life creatures are fascinating.
Take, for example, the three nurse sharks swarming at the edge of their tank at Delray Beach’s Sandoway House nature center.
They each have row upon row of teeth numbering in the thousands in powerful jaws. In fact, sharks lose and regrow up to 30,000 teeth in a lifetime. But this particular species is not threatening unless it is acting in defense. Despite their reputation on television, shark attacks are quite rare.
“Dogs, pigs and vending machines are far more dangerous,” said Jennifer Urbanek, Sandoway House Nature Center assistant, who narrates such interesting tidbits as she calmly places pieces of shrimp, squid and sardine in the tank using a pincer. Children and adults line the edges of the tank and watch closely, snapping pictures as the sharks chow down.
Daily shark feedings are a popular draw at the Sandoway House. On an average day in the summer, there are more than 200 people.
The feeding is geared to visitors of all ages from camps to families to senior citizens.
“I try to get the kids engaged and ask them questions,”  Urbanek said. “I try to impart a lot of information even adults don’t know.”
The nuggets of information combined with the experience of seeing real-life sharks makes it a fun, educational experience for children.
Urbanek said children respond to the sharks with a combination of fear and wonder: “Everything from kids who are very frightened to others who want to bend over and touch them.”
The Sandoway House is also launching a new outreach program this school year that entails bringing certain fish on location to schools.
The school programs in 2014-2015 will cover topics such as amphibians, reptiles, birds and insects. It’s a way for more children to be able to get a glimpse of all that Sandoway has to engage people.
“Sandoway is such a unique place — a historic house, alligator, sharks in an aquarium that’s a converted swimming pool. You can still see the steps,” Urbanek said.
While the sharks are the main attraction, visitors are also amused by the shells, snakes, turtles, fossil dig, and an alligator and microscope lab. There are frequently special events such as a beach cleanups or beach combing.
And if that’s not enough, there is a replica of a megalodon jaw that visitors can stand behind.