A former preschool teacher at the Catholic school who had left four years earlier to help with family obligations, Delgado was at the YMCA in Boynton Beach when she was approached by a then teacher who brought up the idea of her becoming principal.

“She said, ‘Do you hear God calling you?’” Delgado recalls.

A short time later — on a Tuesday in May 2008 when she was scheduled to interview for the job — Delgado was at morning Mass and saw signs pointing to her future in the reading of the day, the psalm, and then the gospel that contains Jesus’ phrase “Let the little children come to me.”

The messages from above, she said, were hard to miss.

“My blessing has always been, ‘OK, God, what do you want me to do next,’ and every time he has shown me the way.’” 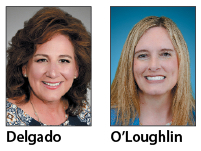 Now, 12 years after getting a job that felt like it was meant to be, Delgado is stepping down and has handed the reins to her former assistant principal, Denise O’Loughlin.

“I think it’s time,” Delgado said, adding that her Oct. 30 departure was bittersweet. “I feel like I’ve done the best work of my life here. All of the gifts that the Lord has given me, I feel like this is where they’ve best been used.”

Delgado will miss the children she has greeted every morning for the last 12 years, the parents she has gotten to know and the staff that has become like family. But she says she’s happy to have O’Loughlin step in.

As she takes over, the new principal is inheriting a school that has grown both physically and in enrollment under Delgado’s watch. Yet it has retained the closeness and high quality of education that first brought Delgado there as a parent looking for a school for her daughter.

Delgado recalls finding the school almost by accident and knowing right away that it was the place for her children. “I felt at home,” she said. “It reminded me of the Catholic school that I went to.”

Delgado, O’Loughlin says, had a knack for making sure people who came to the school always felt welcome.

“She makes everyone feel loved and accepted,” O’Loughlin said. “She has a kind, helping spirit that is infectious to everyone. She is just dearly, dearly loved by the students, parents and everyone she meets.”

O’Loughlin believes the strong religious beliefs that guide Delgado were key to her success as principal.

“She is a true light for what our Catholic faith is all about,” O’Loughlin said.

As principal, Delgado oversaw the multimillion-dollar expansion of the school, which was completed in August 2019. It includes a two-story building with 13 classrooms — many for the middle school students — and a new main office.

The expansion has enabled the school to reduce classroom size and provide improved facilities, including an expanded and modernized science lab.

Delgado, who was born in Cuba, has also focused on diversity and making the school more accessible. Since she took over as principal, the number of scholarships awarded through grants and donations has doubled.

Throughout her years at St. Vincent Ferrer School, Delgado has always focused on building relationships with students and with families and helping children grow educationally as well as in character.

In her final months she was out front greeting children and doing temperature checks while learning to recognize masked students by their eyes.

“Kids here discover their God-given gift and in turn give it back as a gift to the world,” she said.

For Delgado, a knack for teaching and working with children could well be a gift — one that she exhibited at an early age while leading her three younger siblings, but also a gift she fought.

The daughter of a kindergarten teacher, Delgado earned degrees in music and education at the University of Miami and spent several years working in music therapy with special needs children.

While earning her master’s degree in educational leadership she was introduced to a teaching job at Miami Dade’s Jan Mann Opportunity School, an alternative school for challenging students who may have been disruptive and disinterested at other schools.

“That was my turning point,” she said. “I could see how I could make a difference.”

All the while, she said, she kept thinking that teachers could do more if they could just reach children earlier.

After her two daughters enrolled at St. Vincent, Delgado was asked to fill in for the preschool teacher, who was out on maternity leave. She did that for eight years before leaving to take care of an ailing mother.

She was about ready to return to education, and in fact had a job lined up with Palm Beach County schools, when she got the call from St. Vincent’s to be principal.

While her job for most of the past 12 years has been as an administrator, Delgado has also made it a point to visit classrooms and go back to teaching. Last year, in fact, she spent much of the school year teaching a sixth-grade writing and English literature class.

Delgado, 59, says that she had originally planned to leave at the end of last school year but stayed to help with the transition brought on by the coronavirus pandemic.

She says she will spend her time “getting off the bus,” enjoying things like gardening and just being a grandmother, relaxing until whatever is supposed to come her way arrives.
“We’ll see what God has for me next,” she said.