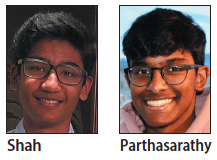 Using an idea borrowed from television, a group of local business leaders and entrepreneurs introduced the Philanthropy Tank six years ago. The program energizes the next generation of “change makers” by challenging high school students to develop and implement sustainable public service projects in Palm Beach County.

The students pitch their ideas to solve community problems in an effort to win $15,000 in grant money to implement them. Hundreds of students in grades 8 through 12 applied to make presentations (virtually this year) in front of a panel of mentors who make the final decisions.

Seven teen group finalists have been chosen for the March 30 finals, including Sarik Shah of Ocean Ridge and Ashwin Parthasarathy of Boynton Beach, both high-achieving juniors at American Heritage High School Boca/Delray.

They had heard about the digital divide — the chasm between students who have access to computers and the internet and those who don’t — but when the coronavirus hit, it highlighted the problem for the friends. “I’m a tennis player, Sarik said, “and it’s like asking a kid to play tennis without a racket. He could play, but barely.”

Sarik and Ashwin did their research and learned that at least 50,000 student households in Palm Beach County didn’t have computers.

“I knew there was a need, but it was double or triple what I thought, partly because there might be several kids in that house who are sharing a computer,” Sarik said.

The digital divide denies students access to an education, and “education is everyone’s right,” he said.

Sarik’s partner, Ashwin, agrees: “Education allows students to secure better jobs and ensure a better path for their future, so I strongly believe no student should be denied the right to reach their full potential due to lack of computer access.”

Sarik and Ashwin propose to change that by collecting used computers and getting them into the hands of people who need them. “Many gently used computers often go to waste after they are no longer being used. We recognized the opportunity to refurbish these computers and redistribute them to students in working condition,” Ashwin wrote in their pitch for Digital Edge.

They’ve collected about a dozen computers and have reached out to businesses for used computers and assistance with repairs. “Minor problems I can fix,” Sarik said.

“These students’ passion for making a difference in their community in very personal ways is incredibly inspiring,” Amy Brand, CEO for the Philanthropy Tank, said in an email.

“The founders, staff, and the mentors who volunteer to guide these students are looking forward to watching each finalist’s upcoming presentation on March 30.”

So far, the Philanthropy Tank has infused more than $600,000 into 45 student projects, which have helped more than 300,000 local citizens. More than 500 students have benefited from participating.

Sarik and Ashwin’s goal is to donate 150 computers by the end of their first year and then increase the total by 50 in each of the following years.

Now, they are practicing their presentation, fine-tuning their pitch so they can move Digital Edge forward.

But Sarik says he already learned an important lesson: “We take way too much for granted.”

Register to watch the live-streamed event at www.eventbrite.com; search for Philanthropy Tank Palm Beach. If you have a gently used computer to donate, contact Sarik or Ashwin at DigitalEdgeFL@gmail.com.