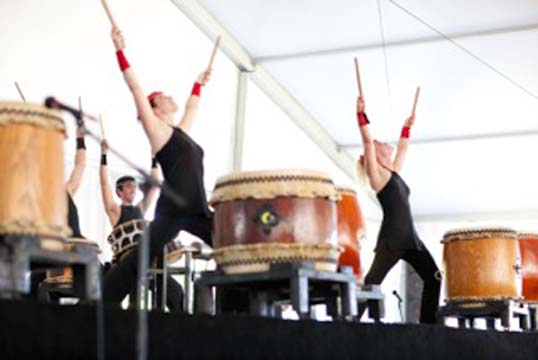 There will be performances by taiko drummers throughout the day at Oshogatsu. Photo provided

Among the Japanese traditions to commemorate the New Year: taiko drummers. A game similar to badminton. An elaborate lion dancer called shishimai. And a giant mortar and pestle to pound out rice cakes in a tradition called mochi pounding.
It’s all part of the Oshogatsu festival (pronounced: oh-show-got-su) at the Morikami Museum and Japanese Gardens in Delray Beach on Jan. 11 — one of the signature events of the year for the museum and an annual tradition for the last 37 years. The festival draws between 6,000 and 7,000 people.
“This is a family-friendly event with a full range of children’s activities,” said Samantha Levine, marketing and events manager for the museum. “It’s lively and a lot of fun.”
Levine said visitors could experience the festival in an hour or two, but “we try to make it so there’s a full day of entertainment.”
She said many of the visitors to the festival each year are young families. Of all the activities, crafts, games and exhibits, children tend to be most mesmerized by the taiko drumming performance, which lasts 20 to 30 minutes and includes multiple shows throughout the day.
“We’re so thrilled to see children enjoy the experience as much as their parents. It’s a distinctly fun experience and it’s also educational,” Levine said.
The teachable moments include not just the festival features, but also that visitors to the festival get to enjoy the museum.
One of the permanent exhibits at the museum gives a perspective of Japan through the eyes of a child. The exhibit features various places such as a Japanese classroom and a Japanese home.
“The kids see they eat with chopsticks. And in certain rooms, you sit on the ground and enter without shoes on.”
For the Oshogatsu festival, Levine suggested that visitors wear comfortable shoes because there is a lot more walking than people might expect for a museum. In addition, she recommended that visitors dress appropriately for spending time outdoors considering much of the festival is in the outdoor gardens.
The Morikami is open year-round and shows a broad overview of Japanese culture and even educates people on the connection between Japan and South Florida. The early Japanese settlers were actually known as Yamato, Levine said, which became the name of a well-traveled road that has an exit on Interstate 95.
One of the early settlers was George Morikami, who donated farmland to the county that became the museum and gardens.
The Morikami is one of the only museums in the country to explore so many facets of Japanese culture.
While children are playing and learning and having fun, don’t forget to wish everyone you see “Akemashite omedeto gozaimasu!” (Happy New Year!)