Local kids are showing their compassion for Ukraine’s children by raising money and awareness through a variety of projects and events.
The Sheldon sisters Violet, 7, and Willa, 3, of Hypoluxo Island in Lantana went old-school with a lemonade stand fundraiser on a sweltering day in March.
Hayley Sheldon, the girls’ mom, said Violet had asked about the bright blue and yellow flags she was seeing in the neighbors’ yards. “I thought, ‘she doesn’t really have to know that at age 7,’ so I told her in the most age-appropriate terms about the war.”
It’s funny how kids connect one thing to another, Hayley said. A few weeks before, Violet had read an American Girl book about a girl who had raised money for the polio vaccine back in the 1950s. Experts say reading books with empathetic characters encourages self-acceptance, which leads to accepting others.
“Violet really has a big heart,” Hayley said. The Sheldon family sponsors a child in Haiti who has become Violet’s pen pal, and she loves volunteering to fill shoe boxes for charity.
Violet had always wanted to do a lemonade stand, and Willa always wants to do what Violet is doing, and since it was spring break, the timing was right for the multiple-day project. One day they made their colorful signs offering homemade lemonade. The next day they made their lemonade from scratch, squeezing the lemons and adding just the right amount of sweetener.
The next day, Violet loaded up their little red wagon and she and Willa set up the stand out in the driveway.
In two hours, the girls sold out of lemonade, and they’d raised $300. Violet told her mom that she wanted to give the money to the kids of Ukraine, so they chose the international charity UNICEF and earmarked the money for Ukraine.
“I’m proud of my girls, but I’m so proud of the community,” Hayley said. “People were calling neighbors to come out and see the lemonade stand. Most people didn’t even buy lemonade. They just made a donation. I’m so glad the girls got that positive reinforcement.”
After the sale, Violet told her mother, “I’m so happy I could cry.”
Violet wasn’t the only local kid working to raise awareness and money for children in Ukraine, or the only person overwhelmed by the response. 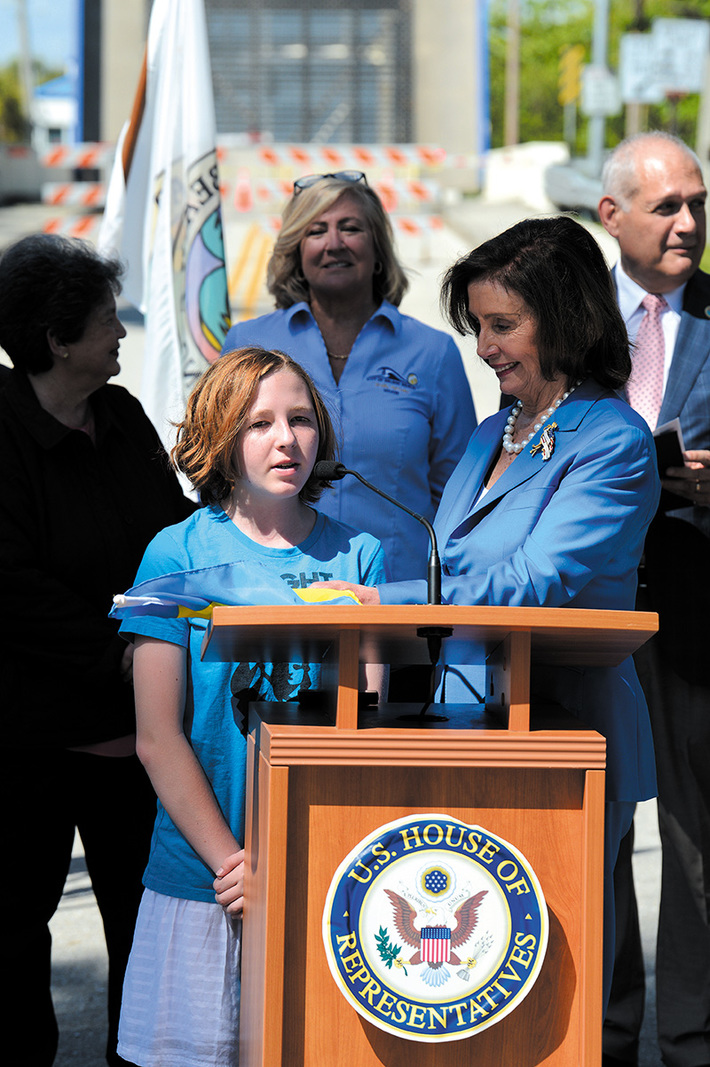 When House Speaker Nancy Pelosi was in Palm Beach County in mid-March to talk about the federal government’s $19 billion investment in Florida’s infrastructure, she spoke near the broken George Bush Boulevard drawbridge in Delray Beach (stuck in the up position until late April).
Kiki Casale, 12, was there handing out Ukrainian flags to raise money for the American Red Cross’s humanitarian work in Ukraine. Kiki proved that someone can make a clear statement without uttering a word when she handed Pelosi a Ukrainian flag. That earned Kiki an invitation to join Pelosi on stage. The speaker of the U.S. House of Representatives said:
“Let me begin by saluting Kiki again for giving us the flag to remind us that children are suffering, that people are fighting for democracy in Ukraine,” Pelosi said. “Tell them what you are doing, Kiki.”
Without missing a beat, Kiki told Pelosi and a crowd of other elected officials and guests, “So we are gathering … still are gathering donations for the Ukrainian children going through funding programs. We are giving out flags today to spread the word, but we don’t need donations today since we are — have been very successful. And we’re just hoping that we can get out of this humanitarian crisis, because it’s very horrible and nobody should be going through this, especially not children.”
That earned the young woman a big hug from Pelosi, and it’s worth noting that Pelosi and Kiki were color-coordinated in Ukraine blue.
If Kiki Casale sounds like a born politician, she comes by it honestly: Kiki’s mom is Juli Casale, the deputy vice mayor of Delray Beach.