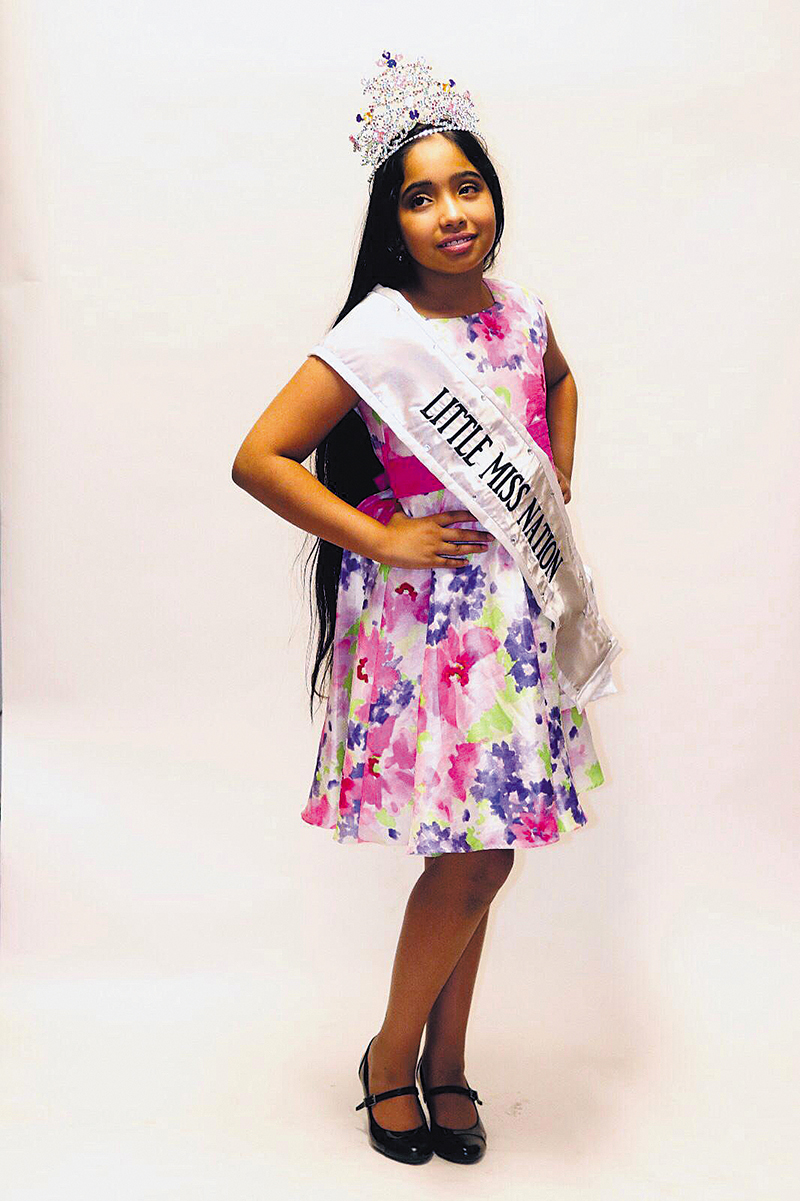 Pine Crest School fourth-grader Bindiya “Bindi” Evans has big dreams and a big personality to get her there. She’s already a model, pageant winner and a fashion designer; now she’s eager to try her hand at acting. “I think I’ll be good at it,” she says.

The 10-year-old girl has her fingers in lots of pies. She says her friends like her because she’s super-positive, doesn’t take sides and supports conflict resolution. “I’m a Libra,” she says. “I like to balance things.”

Bindi’s credentials include her own fashion line, Bindi Fashion Designs, with dozens of dresses — her strong suit — from frilly to red-carpet ready. She credits Nora Marvilli and her company Bella Fashion for showing her what’s possible.

The South Palm Beach preteen is the reigning “Little Miss U.S. Nation,” a title she won wearing a dress that revealed an American flag. But really, Bindi lives a multinational life. Her mother, Rahonie, is Indian and came to the U.S. from Guyana in South America. She is a family nurse practitioner working in cardiology and internal medicine and is pursuing a doctorate in psychiatric and mental health. Her father, Lee, was born in Missouri, and his heritage is French, Irish and German. He’s a medical technologist who works in a lab.

When Bindi was a baby, they hired a nanny who spoke only Spanish so Bindi would learn the language seamlessly.

She did, and being bilingual helped Bindi land a spot on a Telemundo television show in development, working title “Bella Divas.” Step one: Lessons to get her camera-ready in poise and etiquette, walking and sitting properly, and speaking well, skills she’ll use when she visits New York, London and Milan this spring. When she’s not busy preparing for filming the Telemundo show, she’ll explore fashion, modeling opportunities and show her clothes on those trips. Bindi loves the pageant world, but she’s a savvy girl so she knows that for some people, being nice is just an act. “You can tell who your real friends are,” she says.

They’re the ones who are genuinely happy when you win. Bindi wears her graciousness like an invisible crown. She knows that someone else’s success does not detract from her own accomplishments. She’s excited that in her next pageant, in March in Orlando, she’ll be working on the other side of the aisle, crowning the winners and being a featured performer on the violin.

“I think crowning and the titles inspire kids that don’t have confidence,” she says.

Confidence is one of Bindi’s strengths. She’s direct. She makes eye contact. She’s clever and funny. Her hands fly up to frame her face and to silence her mother so Bindi can tell her own story. Her pageant platform is “kids living without stress.” Stress is something she sees a lot.

Some of it comes from parents, she says, who are under stress too. “Be nice to your parents” is her advice. “You don’t know what they’re going through.” Bindi may not know the word empathy yet, but she already understands it.

Her world is full of the arts. She started violin at 3, is learning piano and guitar, loves to draw and paint and likes reading and writing in school. She finds inspiration and creativity everywhere she goes.

“I get inspired by nature,” she says. “It makes me want to design flowery dresses.” One of her most popular creations is a vibrant floral-print party dress with a wide pink sash. Her favorite pieces are a tutu-inspired two-piece leotard and poodle skirt and a neon green outfit that’s an age-appropriate ace-bandage dress but with a big skirt.

Ask what she loves, and she provides a list: “I love Harry Potter. I love anime. I love theater. I love my guinea pigs, Oreo and Sylvester Stallone. I love being unique.”

Her mom looks surprised when Bindi says, “My friends sometimes call me a weird goofball and I’m OK with that.”
But that’s Bindi. Just go with it.