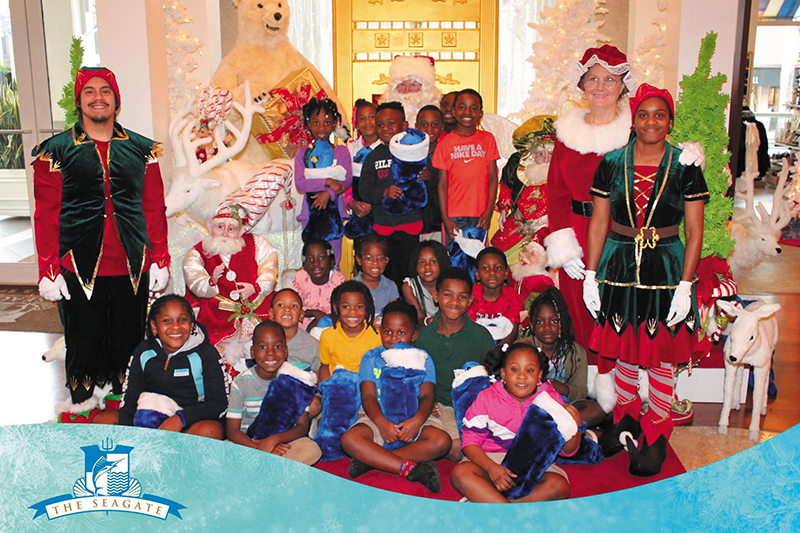 Delray Beach’s Seagate Hotel hosted about 20 children who got to meet Santa, his wife and helpers. Photos provided

On Dec. 12, as it has every year for the last six years, the Seagate Hotel & Spa in Delray Beach hosted kindergartners and first-graders from the Achievement Centers for Children & Families and the Boys and Girls Clubs of Palm Beach County for a Santa Claus meet-and-greet. The children enjoyed rides on the Seagate Trolley, a party with cookies, crafts and carols with Mrs. Claus, and gift bags stuffed with goodies to take home.

And look at Santa! This was no hired-off-Craigslist figure. E. Anthony Wilson, CEO of Seagate Hospitality Group, played the jolly man and Carie Cody, the hotel’s retail manager, was Mrs. Claus.

Wilson left town on Santa’s heels, but we reached him by email: “One of my favorite Christmas traditions that I look forward to every year is getting the opportunity to dress up as Santa for an annual holiday children’s event. All kids should experience the joy of meeting Santa and I’m honored to be able to provide that experience.

“There’s only one thing better than supporting the Achievement Centers and the Boys and Girls Clubs, and that’s seeing smiles on the children’s faces when they meet Santa face-to-face. It’s the little things that make this holiday season so special.”
Way to go, Mr. Wilson! In Boynton Beach, a party for displaced Bahamians meant gifts such as new dresses for Zaniah Maycock, 10, and her sister Leah, 3.

Most kids look forward to Christmas with unbridled glee, but for children who lost everything to Hurricane Dorian when it devastated the northern Bahamas in early September, a bountiful Christmas didn’t seem possible. But through the efforts of Sandy Collier, who owns Hey, Sandy PR, and Bethan Whitely, founder of Children’s Oasis International, dozens of kids received a happy — and delicious — Christmas.

On Dec. 14, families gathered at the New Disciples Worship Center in Boynton Beach for an authentic Bahamian breakfast. Volunteers served Bahamian favorites outside under tents in perfect South Florida weather. Nothing like the weather that brought Shanterica Bain and her three kids to Boynton Beach.

Bain says she and her children nearly perished in the storm. As the water rose around them, Bain and her fiancé, John Comet, took their three children (the youngest just 4 months old) plus four nieces and nephews to a shelter in their van. But the doors of the shelter were locked up tight, and the screeching winds and stinging rain prevented anyone inside from hearing their calls for help.
Cellphone service on Grand Bahama had been out all night, but Bain got through. Comet carried each of the kids, the oldest 14, one by one, to the side door.

The next day, Bain and the kids were evacuated, but Comet stayed behind.

Bain is grateful for the help she and her family have received and says the kids are happy and excelling in school, which is important to her. But she doesn’t want to go back to the Bahamas.

She says the experience has been harder, mentally and emotionally, on her than the kids, who have bounced back. But the jovial spirits of the volunteers who served special dishes from home lifted her spirits.

Collier got help from the crew from Funky Fritters, including owner Brandon Mervil, and Mini Meals on Wheels founder Christina Dixon Wells. The food was paid for by West Palm Beach attorneys Michael Pike, of the firm Pike & Lustig, and Tayson Gaines.
After breakfast, the kids listened to a Christmas story read by Whitely while the gifts were readied. Then each child was called up personally to receive his or her present. Each actually got two gifts: one to open then and one for Christmas morning.

The one thing that didn’t go as planned, Collier said, was “11 children who weren’t registered didn’t receive anything, but we told them we’d fix that.”

Volunteers are needed for the Child Rescue Coalition’s Blankets and Bear Hugs Community Day, which takes place from 2 to 4 p.m. Jan. 25. Tickets are $25.

When that happens, child victims can take a bit of comfort from care packages that include a teddy bear and a soft blanket, a coloring book and crayons. Police officers stock their patrol cars just in case.

On Blankets and Bear Hugs Community Day, volunteers of all ages are invited to join law enforcement to assemble teddy bear care packages. The event will include a presentation about the CRC’s work and how you can keep your kids safe online. All ages are welcome.