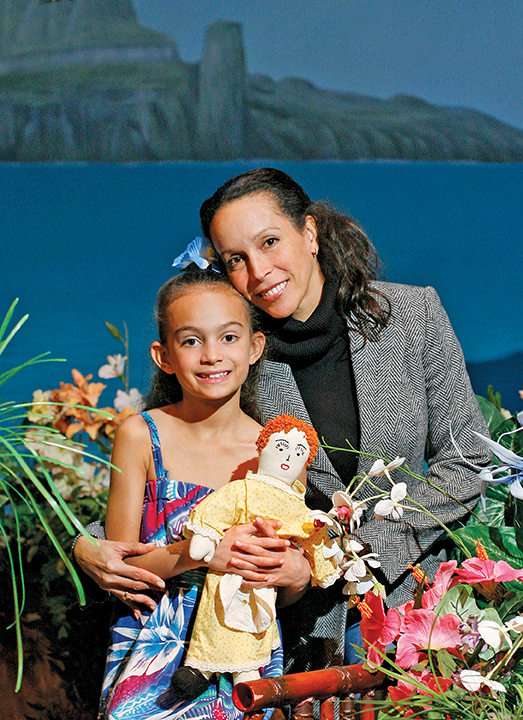 Young actress Alycia Mulliez-Duberry with her mother, Francine, on the set of South Pacific.

Haven’t heard of actress Alycia Mulliez-Duberry yet?
“Remember her name,” said Kim Wick, vice president of The Wick Theatre & Costume Museum. “She will be on Broadway one day.”
Alycia, 8, made her stage debut in Boca Raton in the Wick’s production of South Pacific, the only musical ever made from a Pulitzer Prize-winning novel.
“Alycia is simply lovely,” Wick said. “She’s sung at a few of our cabarets and we were all just so impressed with her.” The young star joined the cast late and had only a few days to prepare, but she handled it like a pro, according to Wick.
Those who work with her say Alycia is a poised, confident young lady without a trace of arrogance. She is in the second grade at the Gulf Stream School and she prefers art and P.E. to math and science, but she says her teacher is nice. At home, she enjoys playing with her two dogs, a papillon and a Rhodesian ridgeback. Sometimes she makes up little plays for her stuffed animals to act out.
She doesn’t get nervous when she’s getting ready to perform.
“I just feel excited,” she says. “Well, I am a Capricorn. We take risks.”
She likes to learn her lines and usually finds it easy to remember them. “It’s fun that you get to be something you’re not.”
Alycia also studies ballet — she started at age 3 — and she’s a good athlete, as well. Good thing, too, because she says her dream is to be an actor in Cirque de Soliel’s Cavalia, which features dozens of horses and acrobats. She likes horses and says the trick is, “you just have to be calm.” She rides at Delray Equestrian Center and says she’s been saving her birthday money so she can buy her own horse.
Alycia’s mother, Francine Duberry-Mulliez of Gulf Stream, has done some acting herself and is relieved that her daughter has been able to juggle her school, extracurricular activities and the performances so easily.
“Between scenes we do homework,” mom says. Both are committed to making it work. “It’s great experience for her to work with real professionals.”
It’s also great to be in a show that earned critical acclaim. South Pacific ran through Feb. 14 and received great reviews. The Palm Beach Post gave it an A-minus and called it “a straightforward, heartfelt, well-sung production with the show’s many assets intact.”
Alycia recalled a trip she took to New York City to see the Rockettes Christmas Extravaganza, when she visited Central Park and went to the best toy store ever, FAO Schwarz. She did not, however, get to go ice skating at Rockefeller Center, so that’s on the rosebud’s bucket list. She’s ready to go to Broadway tomorrow, she says.
If the critics are right, she won’t always be in the audience.