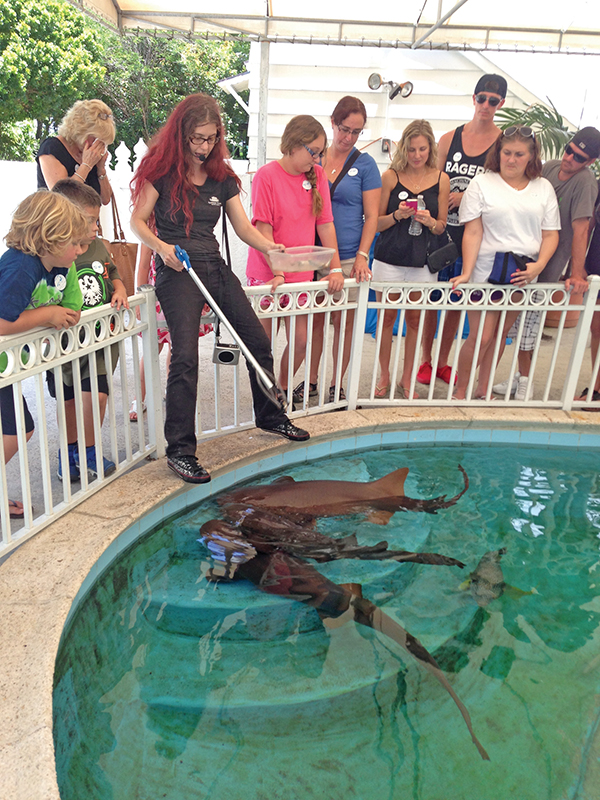 Sharks — they’re among the fiercest creatures in the Earth’s oceans. They’re also among the most misunderstood. Hollywood portrays sharks as little more than man-eating monsters intent on gobbling up humans who venture into the water.
Visitors to the Sandoway Discovery Center in Delray Beach on Jan. 21 will get the opportunity to see the true sides of sharks during Sharkfest from 10 a.m. to 3 p.m.  It’s a first-of-its-kind event for Sandoway, which has given locals and visitors close-up experiences of Florida fish and reptiles for nearly 20 years.
Sharkfest differs from Sandoway’s annual Shark Month exhibit, which goes from June to August, in that it is more festival than exhibit.
“It’s a family-friendly event for the day,’’ said Sandoway Discovery Center Executive Director Danica Sanborn. “We want to bring people to the center for shark awareness.’’
To better create awareness — and separate fact from fiction — Sandoway will host the Florida Atlantic University Shark Research Lab and the University of Miami’s Rosenstiel School of Marine and Atmospheric Science.
Sharkfest will coincide with the annual shark migration from the Bahamas to off the North Carolina coast.
“So usually around February and March you see all those videos on the news of ‘thousands of sharks’ off the coast,’’ said Evan Orellana, the center’s director of education and animal care.
Most of the sharks, said Orellana, are requiem and spinner sharks — not exactly the most aggressive of the species. But they are sharks, which means people, particularly non-Floridians, harbor misconceptions about them.
The No. 1 misconception? That sharks are lying in wait to bite unsuspecting swimmers off the Florida coast.
Orellana pointed out the window of his second-floor office inside the Sandoway Discovery Center.
“Statistically that coconut hanging on the tree is more likely to get you than a shark,’’ he said. “Most Floridians know it’s a low percentage but out-of-staters don’t have that information.’’
“They think it happens every day,’’ Sanborn said of shark bites. “But when they’re given the numbers, they say, ‘Oh, only this many?’’’
Statistics, Orellana said, are just numbers unless they have enough facts behind them.
“You don’t know if those 10 shark attacks occurred at night near a pier where there are a lot of fish,’’ he said. “You have to have more information.’’
That information begins, Orellana said, with respect for the sharks, their history and their habitat.
“They deserve the conservation we give dolphins, turtles and other animals,’’ he said. “Sharks are animals in the ocean. They’ve been around since before the dinosaurs.
“They need help with somebody telling their story and providing shark education to the public.’’
And that’s what Sharkfest is all about.