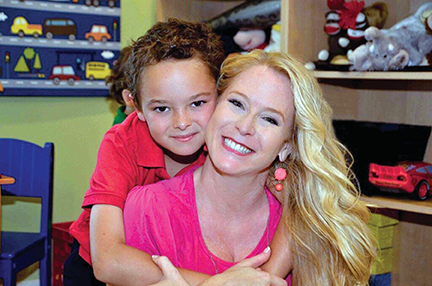 youth editor and music scene reporter of the magazine. 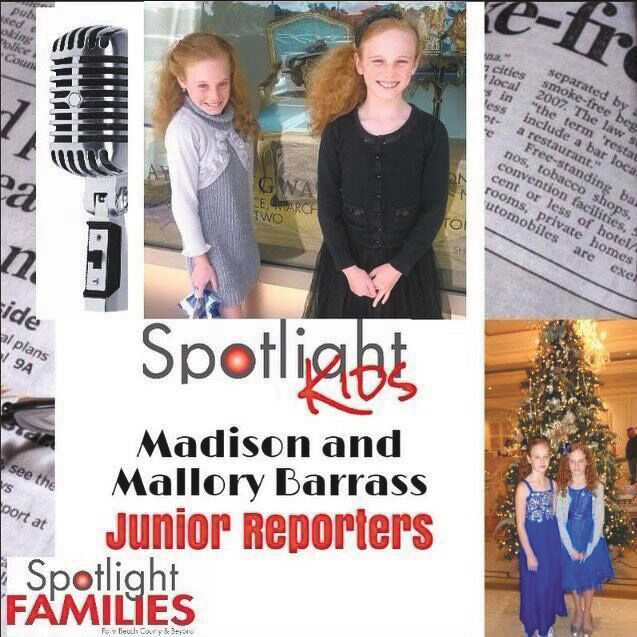 Twelve-year-old twins Madison and Mallory Barrass are two of the junior reporters.

Shawn Sherlock achieved A-list success after high school but didn’t tap into her true passion until much later.
In fact, the former captain of the Miami Heat dancers had several successful careers after she stopped dancing professionally. She parlayed her on-air exposure and a Florida State University journalism degree into a promising career reporting the news for ABC, CBS and CNN. Later, she held a high-level sales job with a Fortune 500 company where she regularly exceeded her goals.
After Sherlock and her attorney husband, Luke, welcomed their first child, Aiden, motherhood was everything she had dreamed of and more. She continued working, but it wasn’t the same.
She reveled in her relationship with Aiden, an only child until Shane came along eight years later. Sherlock was content; she had a lovely home in Boca Raton and was fulfilled by the challenges of being a mom.
Hoping to make new friends with similar values and interests, Sherlock joined the Junior League in 2010. The league desperately needed help with its magazine, which made Sherlock and her journalism degree a perfect fit. “The first year was crazy!” she said. “But the third year was amazing.”
The news bug had bitten Sherlock again, but this was different. She realized the projects she most enjoyed in television were the parenting stories.
She looked around and saw the need for a parenting magazine in Palm Beach County “that was more than a resource guide.” She wanted a stylish, glossy mag that local families would enjoy.
In 2014, armed with more confidence, Sherlock created Spotlight Families magazine (www.spotlightfamilies.com), with an online and video-based “go-to” resource for moms.
In producing the magazine, Sherlock said, “I found a purpose.”
She put together a team, drawing from the talent pool at the Junior League and using her experience working in newsrooms to lead. “We formed a tight-knit family. We all have kids, and we get it,” she said.
Spotlight Families is devoted to building stronger, happier families. The site offers tutorials on common problems, and offers moms a way to connect with other moms facing similar challenges.
It focuses on family-friendly businesses and especially businesses that help busy mothers be better moms. In a world that often makes mothers feel inadequate, Sherlock and her magazine focus on building them up.
The magazine began clicking along so well, Sherlock decided it was time to add a section just for children. “The kids section took off!” she said. “We got 30 letters from kids and parents.”
It wasn’t much of a jump for Sherlock to add some youngsters to her staff to produce content for kids by kids. She handpicked 14 children for the first edition.
“I chose the kids who really wanted to do this,” she said. Kids are paired with a staff mentor who is doing the job the kid wants to learn.
Mentors include Joel Silver, who has 20 years’ experience in news and owns the production company Silver Digital Media. “He’s one of the Spotlight Families digital video gurus who will be sharing his expertise with all the kids,” Sherlock said.
Aileen Van Pelt is a journalist-turned-PR-pro with a passion for fashion and a background in television news. Her husband, Brian, is an award-winning news photographer and he’ll guide the four junior photographers through shooting their first assignments.
On the Van Pelts’ blog at NewsyParents.com, you’ll find tips and videos on “fashion, food and family fun” featuring their daughters.
Christina Nicholson, Spotlight Families’ lead reporter, writer and PR go-to pro (her company is Media Maven), is a former TV journalist, as well as a social media specialist and blogger.
Laura Byrne is an on-air personality who is also a blogger and a full-time mom. Ann Howard, a full-time mom, is a blogger and former on-air talent. Nicole Taylor is a former reporter, now mom and photographer.
Teen editor Rebecca Zerbo, 16, leads the Spotlight Families Kids Team. She’s 16 and a junior at Olympic Heights Community High School.
Sherlock’s son Aiden, 11, a fifth-grader at St. Joan of Arc, is the youth editor and music scene reporter.
Damani Jones charmed his way into a junior reporter’s slot the first time he and Sherlock met at a Junior Achievement event. The well-dressed 11-year-old “had a certain something,” Sherlock said. He’s a fifth-grader at Abundant Life Christian Academy.
Chloe Reeves, 11, a sixth-grader at A.D. Henderson Middle School, is tackling design duties as a graphic artist, as is 12-year-old Gina Montalto, a sixth-grader at West Glades Middle School.
Christine Stephenson, 15, a freshman at Boca High, is a teen photographer.
Sara Tiedemann, a home-schooled senior, is 18 and one of the magazine’s teen writers.
Jaxson Patterson, a fifth-grader, is a youth sports reporter. The 11-year-old is a student at Sunset Palms Elementary.
Twelve-year-old twins Madison and Mallory Barrass, who go to Sunset Palms Elementary School, are reporters.
Julianna Merotto, 15, is a junior illustrator. She’s in ninth grade at West Boca Raton High School. Junior photographer Caitlyn Varney, a freshman at Boca High School, is 15.
Sherlock says the magazine is enriching her life. When she wrote a story about a 14-year-old yoga instructor who inspired her, she says, “I walked away wanting to be a better person. I had a whole new standard for myself.”
It opened her eyes to the contributions children make, and how important they are to the future. “I want to help them grow into great citizens and great human beings. I love this community so much,” Sherlock said. “Spotlight Families is where I always wanted to be but I didn’t know it.

“These kids will literally change your life.”