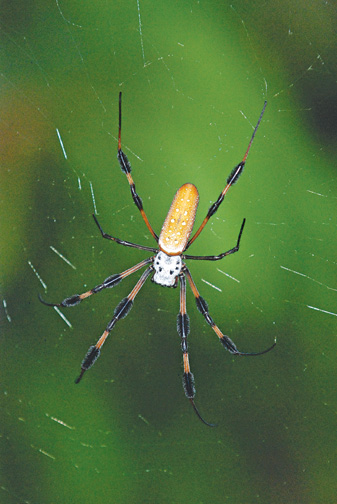 
The thought of long, slender legs and a home draped in colorful silk conjure up an image of royalty and elegance. But couple those things with cunning, stealth and entrapment, and we’re likely to be wary.


Fascinating yet scary is one way to describe spiders, yet some undeservedly deem them evil or dangerous.


“The mystique of the web and the cultural misconception of sucking the life out of its prey add to the stigma,” says Dr. Gregg Nuessly of the University of Florida Everglades Research Center.


According to Nuessly, there are only four dangerous spiders in Florida: the brown recluse, the black widow, red widow and brown widow. They are all shy and are usually encountered by accident.


More common are the harmless and beneficial spiders.


One of these is the golden silk orb weaver. It lives in mature woodlands and yards with tall vegetation. It needs tall trees to launch a thin thread in the wind. When the thread catches on something, the spider walks along it trailing a stronger non-sticky thread. It repeats the process in the center of the line to form a strong Y-frame. Around this, it spins the rest of the web out of sticky capture silk.


The web is large and is built to last, up to 18 feet high and 6 feet across. The angled web is usually off-center and its golden color gives the spider its name. It is strong enough to capture small birds — which the spider doesn’t eat. The birds’ thrashing destroys the web, so the spider will leave “signature” threads or a line of insect husks in it to deter them, like the decals on our glass doors.


This year it seems golden orb weaver spiders are everywhere. Because they need tall trees to start their webs, the hurricanes of 2004 and 2005 took a terrible toll on their ability to build. Plus the wind and driving rain undoubtedly destroyed populations.


Now, with the recovery of our canopy — and some rest from high wind — the golden orb weavers have been busy.


Tribal peoples have used the golden orb weavers’ webs for fishing lures and nets, and to stop bleeding. Today, the silk from the orb spider is being considered for uses such as parachutes, bulletproof vests, lightweight clothing, seat belts, light but strong ropes, as sutures in operations, artificial tendons and ligaments. 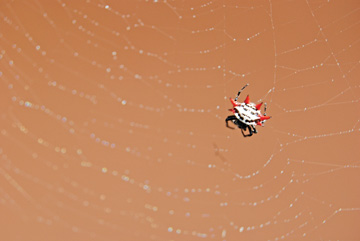 Their cousin, the spiny orb weaver, is one of the most colorful and easily recognized in Florida. It has a white underside with black spots and red spikes around its body. It shares the same web style as the golden orb. These webs are beneficial and capture many insects we don’t want around.


Most spiders, including the orb spider, are relatively harmless. They all can bite, but most don’t, even when we destroy their web. They are beautiful animals, graceful, skillful and elegant in their architecture. Their benefits greatly outweigh any misconception we may have about them.


This Halloween, catch a look at the beauty of our “spooky” friends. Orb weavers are fascinating neighbors.