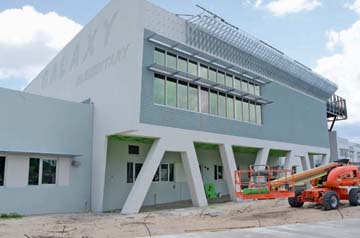 The new Galaxy Elementary School in Boynton Beach will be the greenest school campus in the state when it opens this month. At its heart is a two-story Wonderment Center, a gathering and learning spot.
Photos by Jerry Lower/The Coastal Star

When school starts on Aug. 19, students enrolled at the brand-new Galaxy Elementary on Boynton Beach Boulevard just east of I-95 will be walking into Florida’s greenest school.
That’s “green” as in highly energy efficient and sustainably designed. The nearly completed $30 million school is likely to qualify for the highest level of certification available from the U.S. Green Building Council: LEED Platinum. LEED stands for Leadership in Energy and Environmental Design.
No other school in Florida, and few in the entire country, has achieved that ranking to date, according to Galaxy principal Edmund Capitano.
Impressive, yes. But the bigger story in education circles is how the school’s design will enrich its curriculum. Galaxy’s educational focus will be on energy, environment and engineering — E3 for short — and the building itself will allow for countless teachable moments. Not like your old school
Think back to your elementary school. Remember the mysterious door marked Boiler Room that was always locked and only the custodian had a key? At Galaxy, all rooms containing the building’s mechanical equipment are clean, well lit, and have windows for students to peer inside.
“Everything’s labeled so when children come in, they can look through these glass windows and see the mechanical systems in action,” says Capitano.
Those systems include air-conditioning equipment that produces ice during the night (when energy demand is low), then uses it during the day to chill water to cool the building. The school has a solar-powered hot water system and, if grant funding comes through, a cistern will capture rainwater for irrigation while wind turbines along the edge of the property will convert Boynton’s breezes into energy.
Touch screens installed around the school will display real-time information about the building’s electricity usage and water consumption. Capitano says students will be taught to take readings, graph observable data, write about their findings, and share it verbally. It’s the essence of “whole child” education, he says.
“It’s not like, OK, time to go to math, time to go to science. No, we’re integrating everything, and the kids won’t even realize they’re doing it because they’ll be having fun,” Capitano says. 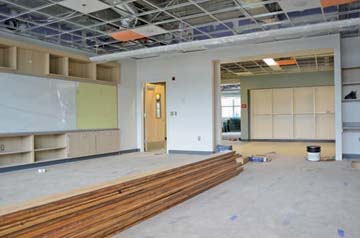 Lumber reclaimed from the old Galaxy Elementary School sits stacked in a classroom. The wood will be used to build furniture and other fittings

Tapping into the wonder
An enormous two-story room in the center of the school is known as the Wonderment Center, so named by Zyscovich Architects, the school’s designers. In addition to serving as the school cafeteria and auditorium, the Wonderment Center will have interactive science exhibits: gears mounted to the wall with workable pulleys; a parachute-drop display to teach students about gravity; and on the high windows facing da Vinci courtyard (yes, it’s named after Leonardo), hanging prisms will demonstrate light refraction.
The school’s media center (they used to call them libraries) overlooks an elevated terrace that soon will be sprouting grasses and native plants.
“This will be the first green roof for the school district,” said senior project manager Matt Mahoney of Pirtle Construction during a recent tour. “The kids will exit from the environmental lab onto a patio where they’ll have access to the green roof to take measurements and make observations.” 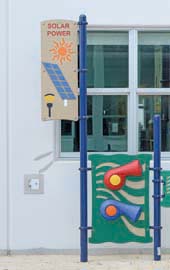 Even the playground equipment offers lessons about solar power.

A new kind of choice
The new school replaces the old Galaxy Elementary School campus, whose buildings dated back to 1958 and previously housed Boynton Junior High. In late 2007, the School District of Palm Beach County voted to close Galaxy and move students to other schools in order to save money.
But after lobbying from parents and church leaders in the surrounding area, the School Board reversed its vote — and Galaxy’s history took an interesting new turn.
Plans were drawn up to demolish the old school and build a pre-kindergarten-through-fifth grade “choice” school.
“What makes Galaxy extra-special is that we are taking any child who lives within our geographical boundary, as well as any child in the school district with an interest in environmental science,” says Capitano. “If you live within the boundary, you’re in, there’s no application process for you. Whatever seats are left over go to the kids who apply through the choice program.”
As of this writing, about 60 choice students have applied and been accepted. There’s no need for a lottery yet, since enrollment has not exceeded the new school’s capacity of 680 students. 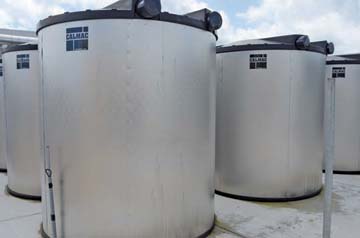 It takes a village
Carrying out the vision for the “greenest school in the galaxy” has involved the entire community. The project budget includes $2.3 million in grants and donations, which are still being raised. The Quantum Foundation awarded a $750,000 grant to pay for the Wonderment Center, and private donors have kicked in about $120,000 so far.
The city of Boynton Beach, whose Climate Action Plan emphasizes sustainable development, gave the school district four acres of land behind Galaxy that’s to be developed and jointly used. When Galaxy students aren’t out there studying indigenous flora or native gopher tortoises, neighbors will be able to use it as a city park.
“We want kids to get a feel for science every day of their lives,” Capitano says. “These are the formative years when kids start understanding that, hey, if I can dream it, I can build it. We’re teaching them to take their ideas and apply them to problems in the real world.”
Donations on behalf of the Galaxy school project may be made to The Education Foundation of Palm Beach County. To learn more, visit www.galaxygreen.org.