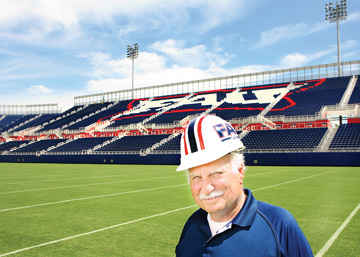 Howard Schnellenberger will wrap up a career
of more than half a century of football during the
debut season of Florida Atlantic University’s new
stadium on the school’s Boca Raton campus. Photo by Tim Stepien

FAU tries kicking food up a notch at new stadium

Two weeks before, doctors at the Specialty Orthopedic Center in Boca Raton had removed Schnellenberger’s right hip and installed a high-tech version to improve the original, tested and tortured through hard-core playing days and the practice-and-sideline exertions of Schnellenberger’s 77 years.

He was back on the practice field the following week.

He is about to climb, this September morning, into the school’s nearly finished and still unnamed football stadium, on a survey tour. He approaches it as he would any of his shared efforts. “Let’s start down here,” he says, “and work our way up.”

To make sure no one confuses the surgery with his status, FAU announced in August that Schnellenberger’s first year in the new stadium he fought so long to realize also would be his last, his final year as a coach, head or assistant. Anywhere.

Schnellenberger has nurtured young men and, with them, campuses and communities for more than 40 years. He learned his trade, he says, from a few of the best teachers football has ever seen — Paul “Bear” Bryant, Blanton Collier, George Allen, Don Shula — and also from his coach at Flaget High School in Louisville, Ky., Paulie Miller, whom he ranks among them.

He has been part of national championships in college and pro football, but he never has stooped to imitation.

McCormack pulls the golf cart up to the stadium’s south end, nosing near a dozen royal palm trees stacked sideways under a looming six-story tower and its massive electronic scoreboard. The trees want planting.

Schnellenberger steps out and walks, with a determined limp on his right side, over machine-furrowed ground toward the nearest entry. McCormack, serving as his guide and aide-de-camp, prepares the way.

Sunlight fans across a tightly cropped field that looks ready for play, but at the south end the goal posts have been yanked out. They were too low, McCormack says. 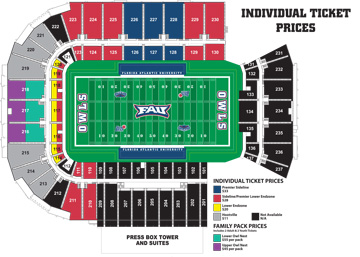 “How did they screw that up?” Schnellenberger says. Ah, but everything else, the multilevel press-and-coaches box with the latest communications links, the air-conditioned indoor 8,000-square-foot premier club, the al fresco priority club with its tiki bar seating 150, the 24 suites and 26 loge boxes, the curving front ticket gates and drive-up valet area … Schellenberger extends a right hand and pronounces the place “palacious.”

“Look at the beauty of this stadium,” he says. “It’s not some concrete monstrosity.” Around a majestically elevated bowl, seats ascend in blue rows, ready to be bolted down. “We’re gonna add over 2,000 palm trees in here,” the visionary says. “We’re gonna have sand around here, maybe a blue lagoon. And we got an ocean view. It’s the only stadium in America with an ocean view.”

That view, he and the other builders hope, will expand by another 30,000 seats, with public support, a winning record and a place in a major conference.

“We’re making compro-mises,” Schnellenberger says.”The vice president of finance tells us ‘no, no, yes.’ For the first time (in five years of planning), I’ve seen a little bit of cutting back, but not to the point you’d notice.”

Then they step into the recruiting room. This, the coach says, is crucial. “The players and the parents come down here and watch us play,” he says. “It’s one of the major reasons a stadium on your campus is so important. They’ll come in here before the game, we’ll have cheerleaders and students who will act as ambassadors, and it’s a great place to get together.”

Beyond it, a carpeted dressing room displays 80 wooden lockers. “When I got here,” the coach says, “you didn’t have a nail to hang a jock strap on.”

At this moment, much of the FAU stadium appears unfinished. Fine tuning follows the finished-by deadline of Sept. 15.

The stadium opens Oct. 15 with a game against Western Kentucky, and the school hopes for a capacity crowd of 30,000. More than 3,000 people, by McCormack’s measure, are physically building the stadium, not counting donors and bankers, not counting architects and planners and overseers of the general contractor, Balfour Beatty Construction.

She could say, with as much confidence, that Howard Schnellenberger inspired and worked for every inch of this place. It will stand as the last of his other legacies on campus: the Tom Oxley Athletic Center, the baseball and softball fields and practice grounds spreading beyond, the recreation and wellness center nearby.

No state or federal money will go into it, the coach says. It belongs with the school’s larger Innovation Village project, but it’s also the most visible end-product of Howard Schnellenberger’s construction of an entire Division I football program, from the ground up.

Until 1964, Florida Atlantic’s Boca Raton campus was what was left of an Army airfield and palmetto scrub. Most of the athletics facilities came much later.

Since Schnellenberger arrived in 1998 as director of football operations and became head coach a year later, the Owls’ home field has been Lockhart, a 20,000-seat high school stadium 20 miles away. Now they’ll have a home of their own.

“Boca will never be the same,” he says. “It’ll be better. It’ll be a major college town. Gonna have conference centers around here, gonna have hotels. Got the med school coming on line. This can be a centerpiece.”

For the moment, the centerpiece might be him. Media people call him “The Voice,” and from his silvered height, 6-3, he delivers encouragements and responses in a weathered basso profundo. He is not, he says, what Paul “Bear” Bryant was, not the one all eyes turned to when he entered a room.

Maybe. Today, at least, all eyes are turning to Schnellenberger. “Big fan! Big fan!” one worker says, grinning, and another says, “That’s a legend right there. A legend!”

His own eyes are focused outward. After a ride up an elevator, to the sixth level, he is looking for the ocean view.

Howard Schnellenberger grew up land-locked, transported by his parents from Indiana at age 3 and raised in Louisville. He played sandlot football with neighborhood kids and showed a gift for the game, and he excelled in high school, where he also played baseball and basketball.

By his senior year in college, a tight end at the University of Kentucky, he was voted a first-team All America. Nothing was handed to him.

As a coach he never has seemed limited in his horizons, even when his attention-getting pronouncements about contending for national championships brought public ridicule. Most of his seemingly off-the-cuff promises, he kept.

Working themselves out of jobs

“How ya doin’?” one of the workers says, stepping up. “My name’s Steve. If you would just sign my hard hat, here, I’d appreciate it.” The coach signs with a message to Steve and says, “Thanks for being here.”

On promotional posters and billboards, the grayer rendition of Schellenberger is pictured, hands wrapped around a football, under his latest slogan, “Get ready, ’cause here we come!”

He has been crafting such unifying slogans since he led the University of Miami to a national championship. Schnellenberger may envision, but he does not pretend. Through this tour, among the workers, he revels in what he sees and also in thinking of the next stage, when Florida Atlantic’s football program will join a major conference.

“OK,” Katrina McCormack says, “the next level is priority. Stairs or elevator?”

“Looks like the stairs are blocked,” the coach says. He lingers, weighing the climb, before conceding the lift. Stepping onto priority, gazing across 16,000 square feet, he says, “I can’t get over the width of the halls in this place, the spaces in it.”

The ocean view, well, Howard Schnellenberger’s been wanting one since the family first ventured to Florida. Now he has it.

“It took us 40 years to get to the ocean,” he says. They were living down in Miami Lakes and kept a home there even when he worked out-of-state.

When he joined the FAU staff, he and Beverlee found a home in Ocean Ridge at Coventry Place, now Turtle Beach, where they can watch the sun rise over the Atlantic.

This, he says, is his last neighborhood.

Walking back through construction debris to the golf cart, he talks about support, about 100 early donors who pledged at least $50,000 each, about 50 of them who together gave $13 million and gained the right to approve details; about gifts-in-kind from local businesses and newspapers; about the $44.6 million finance plan from Regions Bank and the $12 million development rights deal with Crocker Partners.

“So many people have helped us,” he says. “This is going to deliver on the promises.”

As he slides into the golf cart, another worker calls to him, “They gonna name this place after you when you retire?” The coach shakes his head. “S-c-h-n-e-l-l-e-n-b-e-r-g-e-r?” he says. “How they gonna fit that up there?” The worker answers with the coach’s own philosophy: “We’ll find a way.”

The coach asks another man under a hard-hat nearby, “Working yourself out of a job, huh?”

The worker winces and then smiles, and Schnellenberger returns the smile and says, “Me, too.”    Ú