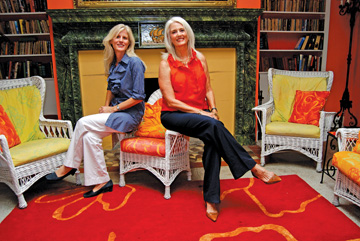 
On a sunny afternoon in May, Jestena Boughton and Hilary Roche converse in a long narrow office at the Colony Hotel. Lucy, the beagle-corgi mix Jestena recently
adopted, keeps an eye on things between snoozes.


The women are planning projects for the Colony and its sister hotel with the same name in Kennebunkport, Maine. There’s always a future project, says Jestena,
owner and manager of both properties. At the sunny golden yellow hotel with its
eye-catching maroon- and white-striped awnings, the finishing touches are being
made on the handsome dark wood lobby bar. The cabana pool is due for
renovations and an in-house laundry is in the works so that sheets and towels
no longer will be sent out for cleaning.


“We’re putting in energy-efficient machines,” Jestena explains, “and we’ll save gas because the linens won’t have to be driven somewhere else.”


Hilary, the hotel’s managing director, is Jestena’s right hand and her cousin. After all, running the hotels has been a family affair for 75 years. Jestena’s
father, George, and granddad, Charlie, bought the Delray Beach hotel in 1935
and ran it until they died — Charlie in 1942, George in 1986. Hilary’s
granddad, John S. Banta, worked at The Colony from 1939 to 1990, starting out
in the kitchen and working his way up to hotel manager of both hotels, a
position he held for more than 35 years. Another cousin, Jestena’s godson John Martin, is the
director of sales. 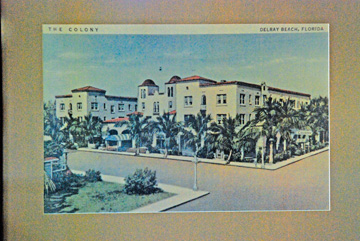 
Jestena’s parents, George and Agnes Boughton, were newlyweds 75 years ago when they drove to Key West and took a ferry to Havana. When they reached the Cuban capital,
people were shooting in the streets during Batista-era protests. So the
honeymooners turned around and began their journey north to Atlantic City,
N.J., where George’s dad, Charlie, was in the hotel business.


During a stop in Delray Beach, then a quaint beach town and a colony for writers, artists and cartoonists escaping the bitter cold winters of the northeast, George
Boughton saw something magnificent. It was the stunning twin-domed, three-story
stucco hotel on the corner of Atlantic Avenue and U. S. 1. The Mediterranean
Revival structure, designed and built in 1926 by Addison Mizner associate
Martin Luther Hampton, was then called The Alterap — and it was in bankruptcy.
After George conferred with his father, the Boughton men bought the property
and changed its name to the Colony Hotel. 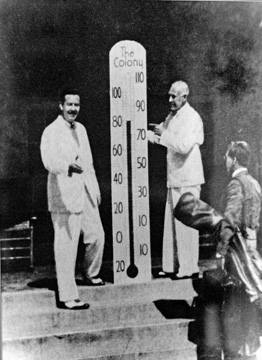 “Guests coming down from the North would arrive by train with trunks of clothes for the season,” says Hilary. The hotel, like others in the area, was open from January
to the beginning of April. Seasonal hotels were common in Florida in the 1930s
and ’40s. Guests did a lot of strolling on Atlantic Avenue and sitting on the
front porch.


“I remember, from my childhood in the ’50s, a lot of guests were my parents age and they’d have cocktail parties,” Jestena says. “People were more social with
each other. There were women with long red fingernails and cigarettes. They had
fun.”


In 1948, Jestena’s father established the Kennebunkport Colony overlooking the Atlantic Ocean and the mouth of the Kennebunk River. That hotel was (and still
is) open from mid-May through late October. For years, staff, including
Hilary’s grandfather John Banta, would travel to work at each property.


In 2001, after air conditioning was installed in the halls (the guest rooms were already air-conditioned), the Delray Beach hotel began staying open all year.


Early on, guests stayed for the season, but that’s changed, says Hilary. Guests are younger now and stay for shorter periods and weekend stays are popular. “People
come and try a different restaurant each night. They like strolling the
(Atlantic) avenue.”


Unlike years ago, when the dining room was open for meals, today’s guests have a hot complimentary breakfast in the lobby. 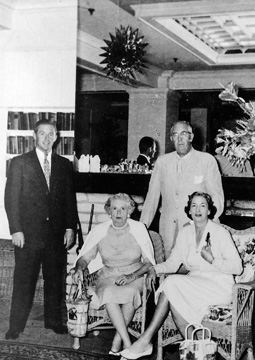 Everything old is new again


Bold and colorful spaces highlight the interior architecture at the 70-room hotel, which still has the original staff-operated elevator and telephone switchboard.
There’s even some of the original 1926 Ficks Reed wicker furniture in the lobby
lit by skylights. An original piano has been restored as the player piano it
once was, only now it plays CDs.


The original floors are a point of pride, too, with terrazzo in the lobby, red oak in the music and dining rooms, and Cuban tile on the front porch. Dade County pine
floors in guest rooms and stairs are in pristine condition.


Much of the furniture inside the rooms are original pieces from the 1920s bought from the John Wanamaker Store in Philadelphia. But there are modern elements,
too, like the large flat-screen TVs and the “Simply Dreamy Beds” with organic
cotton sheets and white all cotton matelassé bedspreads added in recent years.


Recognized by the city as a historical landmark and listed on the National Register of Historic Places, the Colony brought home another honor last month. The Historic
Preservation Board presented Jestena and the hotel with a Preserve Delray
Award, which honors property owners who continually preserve their significant
piece of Delray Beach history.


Growing up in Delray

Jestena, named after her grandmother (Charles Boughton’s wife), was born at St. Mary’s Hospital in 1946 and lived in a little house behind the hotel. She remembers

occasionally getting into mischief.
She would drop bags of water from the roof onto the heads of people
walking by. Girls just wanna have fun, after all.


But she had various chores to tackle, as well.


“During summers in Maine, I ran the elevator,” Jestena recalls.” And when I was 14, I was the relish girl (in the dining room). I worked the front desk, but never in
the kitchen or housekeeping.”


While she knew the business well, it was not where she dreamed of working as a grown-up. She wanted to be, and was, a landscape architect.


“I did work in the hotel for six years when I was married,” she explains. “I was the purchasing agent and I was very bored.”


“I really enjoyed teaching,” she remembers. But when her father died in 1986, she returned to work in the hotels. Then when her mother, Agnes, died in 1994,
Jestena officially managed both
hotels, becoming general manager in 1996.


“Until I did it myself, nothing got better,” Boughton says. Business was faltering in Delray, forcing her to make some tough decisions, like closing the liquor store
her father had opened adjacent to the hotel. It was losing money, having fallen
victim to the Walgreens and Costcos that buy in bulk and sell for less.


She lived in the hotel for a while to keep expenses down.


“It was very stressful for me to have all this debt,” she says.


Her father taught her to be financially conservative. “I sign all the checks,” she says. “I try to watch every
penny.”


All her design and planning background turned out to be good preparation for running the hotels, she says. “My experience made it so much better. You do so
much planning and big designs. That’s what I do here.” 
The dining room walls are lined with old photos of people who owned, worked at or visited the hotel since it opened. One of them shows a handsome, tall, nattily
dressed gentleman with a crisp white shirt and dark blazer. That’s Charlie
Boughton, Jestena’s grandfather.


He died in 1942, but it seems he never totally left the hotel: Workmen and sometimes guests have seen the man in that old black-and-white photo, Jestena
says. They know he’s a ghost because he walks right through the doors without
opening them.


There’s nothing to be frightened about. Charlie, she says, appears to be happy to be there.


He’s just part of the charm of this lovely old hotel.


Two years ago, the Colony Hotel became the third facility in Palm Beach County to be awarded a Florida Green Lodging Certification from the Florida Department of
Environmental Protection. Other
examples of its environmentally conscious practices: Cabanas at the hotel’s
beach club are made mainly of pressed-recycled newspapers rather than wood, and
pet blankets are crafted from old linens. (Dogs are welcome here and are
greeted with treats at the front desk, as well as biodegradable sacks for
scooped dog waste.)


Living green is a deeply ingrained way of doing business for Boughton. “We’ve been doing these kind of things for many, many years,” she says.


One of the things that makes this landmark hotel so attractive is its Cabana Club. George Boughton bought the 250-foot strip of land along the Atlantic Ocean at
the east end of Linton Boulevard in 1950. He turned it into a private club
complete with sea grapes, coconut palms and native flora.


The club, complimentary to hotel guests who can ride a van over, has a saltwater pool heated by environmentally sensitive geothermal technology, a private
beach, and complimentary cabanas, chaises and beach umbrellas.


Guests can have lunch there and charge it to their room. And members are welcome to bring their own food and drinks and store it there during their visit. It’s
like having your own little room at the beach.