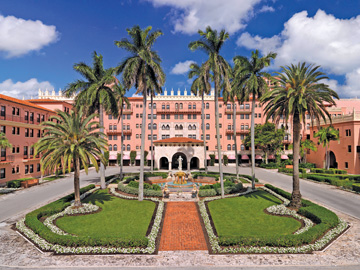 The Boca Raton Resort & Club as it stand today.
The original Cloister built by Addison Mizner is at right.

This year, the Boca Raton Resort & Club turns 85 years old. Looking back, the important role the hotel has played in the community is clear. It’s safe to say that if the iconic hotel never existed, Boca Raton would be a very different place from today.

“This landmark is part of our past and present,” says Susan Gillis, curator for the Boca Raton Historical Society. “The hotel is still a very important part of Boca Raton.”

In fact, people in Boca think of it as “their” hotel, Gillis says. And until World War II, the hotel and agriculture were the mainstays of the area’s economy.

Natalie Warren, a BRHS docent who gives tours of the historic hotel, knows how important the property is to the community. She virtually grew up there.

Her mother was a real estate agent with offices just off what was the hotel’s original lobby.

As a young woman, she held jobs at the resort, including working at the lobby chocolate shop and the hotel flower shop as well as waitressing at the golf course restaurant.

“I loved coming here. It was like being part of history,” she says.

Over the years, the hotel and its owners have done a lot to foster the community. Today, the city is home to about 85,000 residents. But in 1903, it was a farming village with about 18 residents.

Here’s an account of those times from an early settler Harley Gates, who built a house in Boca Raton in 1914:

“Farming was the principal means of making a living during my early years at Boca Raton. Most of the farms were small and usually from five to 20 acres. The main crops grown were green beans, tomatoes, cucumbers, eggplant and peppers.”

Even in 1923, if you arrived on the Miami-bound train, you might think you were in the middle of nowhere, according to papers in the archives of the BRHS.

And that’s what Addison Miznerconfronted when he was commissioned by the Town Council to plan a world-class resort community on the banks of Lake Boca Raton.

In 1925, he acquired three-quarters of a mile of beachfront property and set about building what he claimed would be “The Dream City of the Western World” offering a mixture of “snob appeal and greed appeal.”

By January 1926, nearly 3,500 men were working in Boca Raton to build Mizner’s dream. The payroll was in excess of $1 million a month. And that year, his Cloister Inn opened its doors. That building still forms the eastern wing of the Boca Raton Resort & Club.

“It must have been amazing to see this beautiful, swanky place grow from the ground up. In those days, there was hardly anything here so it must have seemed very impressive,” Gillis says.

From boom to bust

Mizner’s plans for the young community ended when the land boom went bust in 1926. But Mizner still accomplished much by opening his original 100-room hotel.

That was the beginning of today’s resort, which has grown and changed over the years.

“Each of its owners has repurposed the hotel for their times,” Gillis says.

In the 1920s when it was built, the inn was where people stayed while they looked to buy a piece of Boca Raton.

Clarence Geist, a Philadelphia utilities magnate, bought the property in 1927 and turned it into an exclusive club. “His impact on the community either directly or indirectly was of paramount importance,” Gillis says.

During his tenure, he added 400 rooms to the club. He also gave land for a train station that could handle his private rail car, and he created a waterworks that served the city until 1956. Boca Raton had the finest water plant in the state, Gillis says.

He also helped the town weather the Great Depression. “Everyone, black and white, had at least a part-time job at the hotel,” Gillis says.

Foxholes
on the golf course?

In 1942, during World War II, the hotel was taken over by the Army Air Corps until the Boca Raton Army Airfield could be built where FAU now stands. Here they established the only wartime radar training school.

“During that time, there wasn’t enough water pressure at the hotel so things got kind of yucky with all those men quartered here,” Gillis says. There were even rumors they built foxholes on the golf course.

But the hotel survived and, in 1944, it was bought by J. Myer Schine, who owned a number of hotels across the country. He not only painted the hotel a dusty shade of pink, but also, in 1945, opened the club as a year-round resort and welcomed the public.

This was a boon to the town that now had employment opportunities for more than just three months a year.

It also meant the hotel could become more involved with the community. Here’s an account written by his wife Hildegarde:

“Before we bought the hotel it was a private club. As we moved in, the townspeople came to us saying the hotel was the only major industry in Boca, and many townspeople worked there. But no Boca Raton-ites had ever set foot in the front door. I thought that was awful because there were many lovely people here. So I gave a party and invited everyone in town.”

A community
with history

Arthur Vining Davis took over the resort in 1956. He created Arvida, an acronym for his name, and it was a “big force” in Boca Raton until the 1990s. In addition to the hotel, his developments included five high-rise condos and the Royal Palm Yacht & Country Club.

He put his mark on Boca Raton by “creating modern gated communities from farmland,” Gillis says. That’s the Boca Raton we know today.

Docent Warren has memories of that time. Her mother sold real estate for Arvida, and she would go along when her mother showed prospects properties. “I remember her telling them, ‘When you buy here, you don’t just buy a house, you buy into a community with a history,’ ” Warren says.

Davis put his mark on the hotel by adding a 27-story tower of rooms and the Great Hall that contained meeting space.

That meant this vacation hotel could tap into the convention business. “That was Mr. Davis’ real gift to Boca Raton,” Gillis says.

Another famous owner was H. Wayne Huizenga, who took over the property in 1997 and saw the opening of the Mizner Center, a large convention facility, in 1998.

Currently, the resort is owned by an affiliate of The Blackstone Group, a private investment banking firm. 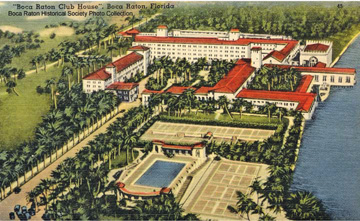 Mizner Industries: The exhibition at the BRHS in Town Hall, 71 N. Federal Highway, Boca Raton, is open 10 a.m. to 4 p.m. Monday through Friday. It includes products made by Mizner Industries and items from Addison Mizner’s Palm Beach apartment.

Boca Raton Army Airfield: “Secrets Revealed” is a lecture by Sally Ling, author of a history of the Army Air Corps radar-training base during World War II and the long-term impact it had on Boca Raton. From 2 to 3:45 p.m. March 9, The event costs $25 and is sponsored by FAU’s Lifelong Learning Society. Freiberg Auditorium, FAU Boca Raton campus, 777 Glades Road, Boca Raton. Information: 297-3171 or 297-3185 or  www.fau.edu/lls and link to “LLS Boca Raton Home.”