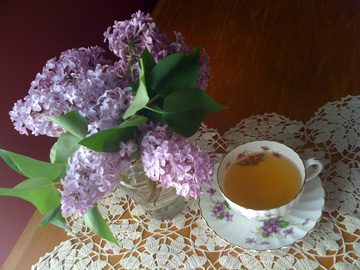 There’s something about tea: Soothing and restoring, a comfort and a tradition, it provides both a lull and a lift to the day. Let fathers celebrate their day with tee times, Mother’s Day tea is an occasion for finger food and flowers.
And tea, of course.
What is it about tea that brings people together?
There’s something salubrious about tea, says one local tea specialist, who goes by the name of Barbara the Tea Specialist. It extends beyond the medicinal properties, the list of which, she says, continues to grow daily: Studies credit tea with curbing high blood pressure, diabetes, stomach ailments,
rheumatism, heart, liver and kidney diseases, and warding off some cancers.
The act of having tea and the ceremonies that have evolved around it have their own benefits, Barbara says.
“You have to pause. It’s very meditative, a release from the everyday,” she says.
Then there are the memories.
“Remember when you were little, and you weren’t feeling well, and your mother brought you a cup of tea?” asks Maryana Matesic of TeaLicious Tea Room in Delray Beach. “I remember when mine did.”
In mid-April, TeaLicious was already taking reservations for Mother’s Day tea, a high tea.
Barbara takes her expertise on the road, helping businesses as well as party-planning individuals to gather around tea  — Mother’s Day teas, wedding shower teas, tea tastings, tea talks — even after-yoga raw-food tea gatherings.
For those planning their own teas, Barbara has this advice: “You don’t have to be a traditionalist to have fun with a tea party. You have to be able to be creative and mix it up. Let your imagination soar.”
After all, she points out, at least 52 countries where tea is grown have it their way: in Morocco, where she says crushed mint leaves in a glass with tea poured over it create “an explosion of mint;” in Japan, where a tea ceremony can be four hours long; and in England, from where traditional high tea comes, and where “they were practically religious about tea time.” 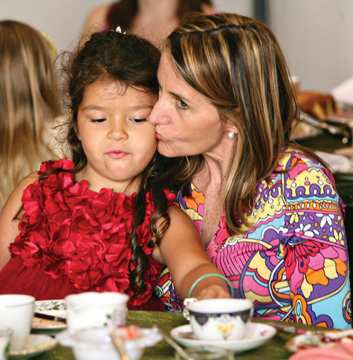 Specialist favors flexibility
A former travel agent who accompanied groups on tours, Barbara developed her philosophy of tea, as well as her knowledge, in her travels. She says the secret to enjoying tea and the treats that go with it is making it your own, and that means including your favorite finger food.
While conceding the cucumber sandwich is nearly indispensable, (“because everyone looks for the cucumber,”) and that an herbal cream cheese is nice (she uses herbs from her garden), Barbara has accompanied teas with mini-bagels, flax seed toast, quiche-ettes and substituted mushroom caps for bread at raw-food teas.
The one constant, she allows, is avoiding knives and forks  — and sticking to bite-sized treats.
As far as the tea itself, “the healthiest tea,” she says, “is whatever you like to drink, because you will drink the most of it.”
That being said, when she says tea, she is talking about white, green, black or oolong. “Anything that’s brewed with water is tea to a lot of people,” she says. In reality unless it comes from the tea plant — camellia sinensis — it is not tea.
Flower and herb infusions, as well as the South African rooibos, are tisanes. Not that there is anything wrong with that; Barbara sells and is enthusiastic about the benefits of rooibos, in particular, a favored alternative for those who say they can’t drink tea.
When people say they can’t drink tea, Barbara will ask for clarification, to make sure they are not depriving themselves unnecessarily. While some people can’t tolerate caffeine, others may have a problem that is specific to a particular tea.
While not a traditionalist in food, she is not a rebel either — and high tea does call for a black tea, she says. A white tea, though, goes nicely with dessert.
Tea definitely is like wine in at least one respect — if you pay attention to the flavor, you can pair it with foods, she says. “A custard dessert with a black tea goes very fine. I have a white tea with a pineapple and coconut and that goes beautifully with cake.”
Barbara allows that “purists” would consider a white tea to be bending the rules of a traditional high tea, and might also find flavored tea to border on revolutionary. Flavored tea popular here
Each region that tea comes to sets its own standards, however. In these parts, fruit-flavored and spiced teas seem to be closer to the rule than the exception.
A “berry white,” flavored with hibiscus and jasmine as well as berries, is one of the best-selling teas at Boca Raton’s Spice and Tea Exchange. That could be because of the scent — the Boca Raton store doesn’t serve tea, but encourages customers to judge with their noses.
Another popular tea there is a green tea with pineapple and strawberry flavor. “When you take the lid off you feel energized,” Tea and Spice Exchange sales associate Donna Ferguson said.
The most popular tea at TeaLicious is a ginger and peach flavored black tea, with a rich chai coming in second, according to Matesic.
Barbara, who deals in about 100 different teas, says her most popular infusion isn’t a tea at all but a rooibos flavored with cranberries. Her second most popular is a macha green tea, and the third is the pineapple cocoanut white.
As the rules for tea and its accompanying treats are flexible, so is the order in which it can be consumed, Barbara says. While she teaches etiquette, and says many who consult her for mother-daughter teas cite passing on the etiquette as part of the experience, she also is just as willing to dispense with the etiquette.
“It’s under debate — you eat your scones first, then you eat your tea sandwiches, then you eat your desserts,” she says. “But I’ve heard tea aficionados challenge that, and say, no you never eat your scones first — that’s why I say, shake it up, relax. Luckily we’ve gotten away from the rigidness of having to have the etiquette.
“Whatever tea you like to drink, drink it. Whatever food you like to eat, eat it,” she says. The more you know, the greater the variety, she adds.
“I mean, there’s really a lot to be said about tea.” 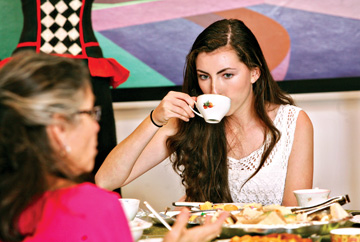 Maegan Assaf sips tea during the annual Mother and Daughter Garden Tea Party at the Boca Raton Museum of Art. She attended the tea party with her mother, Nadine (at left).

How to make a perfect cup of tea

The rule of thumb is one teaspoon of loose tea for each 8 ounces of water.  Some mugs are 12 ounces. In that case, you would want to add a heaping teaspoon.
Loose tea can be re-brewed two or three times.
All tea is brewed differently. The amount you use is pretty universal, but the steeping time varies.
Black teas are brewed with boiling water (boiling is 212 degrees). Wait until it boils, take it off the stove and let it sit for five minutes, and use an instant-read thermometer to tell you the temperature.
White and green teas use lower temperatures: 160-175 degrees — basically when it just begins to boil. Steep for one to three minutes.
The rooibos and black teas use boiling water and five minutes to steep.
Source: Barbara the Tea Specialist

Learn about tea:
Morikami Museum and Japanese Gardens
4000 Morikami Park Road
Delray Beach
Upcoming demonstrations are May 19 and June 16.
Demonstrations are offered throughout the day at noon, 1, 2, and 3 p.m. and are $5 in addition to regular admission.
495-0233
www.morikami.org