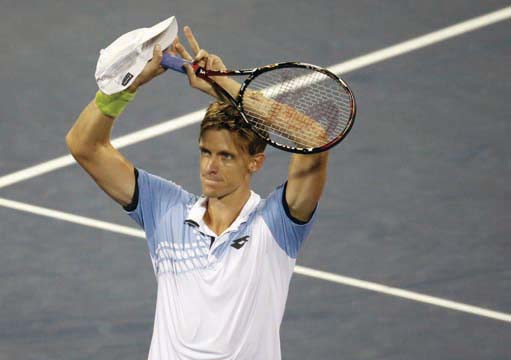 Kevin Anderson of Gulf Stream waves to the crowd during the U.S. Open.

Any good professional athlete worth his or her salt will tell you that every pitch, every pass — and, in Kevin Anderson’s case, every stroke —is a learning experience.
If that’s indeed true, then this summer has been an unprecedented learning experience for Anderson.
The Gulf Stream resident last month broke through to the quarterfinals of the U.S. Open, with a four-set upset of British star Andy Murray, ranked No. 3 in the world. It was the first time in Anderson’s eight-year professional career that the 29-year-old native of South Africa had reached the quarterfinals of a tennis Grand Slam.
Anderson lost in straight sets to fifth seed Stan Wawrinka in the quarters, but left New York with a renewed confidence — particularly after he had won the Winston-Salem Open just a few days before the U.S. Open.
The Winston-Salem title and the quarterfinals run at the U.S. Open propelled Anderson from 14th to 12th in the ATP world rankings and 2015 earnings of more than $1.5 million.
“Playing the week before the U.S. Open felt great,’’ Anderson said. “It was my first title since Delray Beach in 2012. The U.S. Open was in the back of my mind, but it was rewarding from a personal standpoint of achieving my goal of winning a title.
“One of the concerns going into the U.S. Open was that, after playing the previous week, how my body would feel. It felt great, so there were no downsides. Beating Murray in the fourth round was the highlight of the week for me.’’
Anderson’s victory over Murray was his first in eight tries in the fourth round of a Grand Slam event. He hit 25 aces and won 41 of 58 points at the net in beating Murray for the second time in his career.

“I wasn’t doing anything outside of my comfort zone,’’ Anderson said. “I was playing the kind of tennis I believe I can play consistently. I think moving forward it gives me a lot of confidence in how I want to play. I wasn’t doing anything magical — just sticking to the basics of how I want to be playing tennis.”
While he didn’t win the U.S. Open, Anderson did leave New York a winner when he was named recipient of the U.S. Tennis Association’s fifth annual U.S. Open Sportsmanship Award.
“It was obviously great to be recognized,’’ Anderson said. “I think I conduct myself pretty well on the court, so to be recognized in that way was fun. It’s quite different from winning and losing tennis matches and something I’m very proud of.’’
Another source of pride for Anderson is his impending U.S. citizenship. Anderson hoped to get his citizenship this past summer, but his tennis travels prevented him from fulfilling all of the residency requirements.
“There are rules that you have to be in the U.S. for a certain numbers of days over three years,’’ Anderson said. “I’m just under that, so hopefully sometime at the beginning of next year I will have fulfilled that requirement.’’