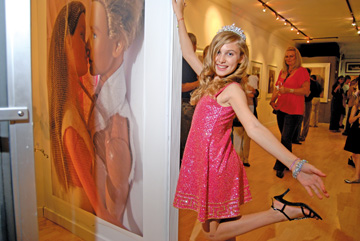 
When Amanda Jean got her first Barbie doll, she had no desire to play with it. Her first instinct was to design a new wardrobe for the model-thin fashion icon.

She used any material she could find, including her own clothes, but after a few years it was apparent this wasn’t a passing whim and her mom beseeched her to
find other fabric for her creations.


“So I thought, I’ll use toilet paper because it is biodegradable and good for the Earth,” says the precocious 12-year-old Gulf Stream School student, who started
her design career when she was 4. Using her imagination — and toilet paper by the carload — she creates detailed wedding dresses, beautiful ball gowns, haughty halter dresses, billowing
skirts, striking bikinis and more for Barbies and pants, shirts, tuxedos and
swim trunks for Kens. Then she washes, cuts, dyes, and styles their hair (with
everything from gel to a flat iron) and poses them for photo shoots.


The dolls all have names. There’s Aphrodite, a sexy brunette sporting a revealing dress. And Natalie, who is lounging in a pool (a plastic container with dyed
water). And Jean, named after her creator, who says “she has sparkle, like me.”


“She’s very imaginative and way ahead of her time,” says her mom, Carol, who relies on her daughter for fashion advice.


There are challenges, though. Posing the dolls doesn’t always go smoothly. “When I was posing Ken and Barbie for the wedding series, they kept falling and one of
their heads popped off. It was so frustrating,” says Amanda Jean, a Barbie
lookalike who takes singing and piano lessons. “It took about 100 shots, but it
finally came out great.”


Amanda Jean’s creations caught the eye of Joe Davis, owner of Delray Art & Frame Center, who was hired to enlarge and frame her photos. He offered to exhibit
the photos at a show at his Atlantic Avenue shop. “I believe she is a brilliant
designer. This is someone who has astonishing ideas about how to make designs,”
he said.


Although the March exhibit was Amanda Jean’s first solo show, she was in her element on opening night. Decked out in a beaded pink dress and a sparkling tiara, she
explained her creations to visitors, pausing to take a demure sip of a Shirley
Temple on the rocks.


As for Amanda Jean’s future plans? “I hope to make recyclable dresses out of a fabric that would be good for the environment. When you have a dress and it
doesn’t fit anymore and you throw it away, it is such a waste,” she said.


Oh, and the blue-eyed blonde also wants to be a model, a singer and an actress. 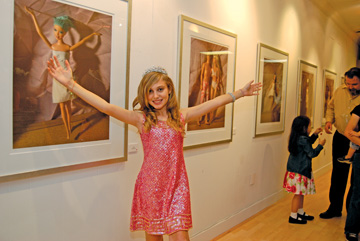