The magnetic device, on a fake hand, repels nurse sharks in the center’s pool. Photos by Tim Stepien/The Coastal Star

Shortly before 10 a.m. on a recent Saturday, four ninth-graders from Grandview Preparatory School in Boca Raton presented themselves at the Sandoway House Nature Center, ready to battle three sharks.
Or baffle them, anyway. 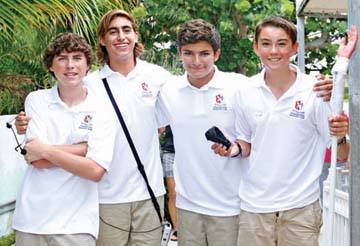 Bennett Kubach, 14, of Ocean Ridge; Albin Engstrom, 15, of Boca Raton; Alexander Abbasi, 14, of Delray Beach; and Tasman Rosenfeld, 14, of Pompano Beach were neatly dressed in the school’s white polo shirts and khaki pants.
Bennett was holding a human arm on a 6-foot pole.
Not an edible human arm. This was one of those gag rubber hands with sleeve and cuff attached, made to be dangled from closed car trunks for the entertainment of fellow motorists and law enforcement officers.
“We ordered it from Amazon,” Bennett explained.
This morning, the wrist wore a waterproof neoprene bracelet enclosing three magnets. The magnets are small, only three-quarter-inch in diameter and eighth-inch thick, but still capable of lifting about 12.5 pounds each. Powerful enough that a single anklet, the boys believe, emits enough magnetic energy to deter sharks.
They have dubbed their product “Shark-X.”
If Shark-X works — and they are certain it does — those magnets will override the electromagnetic sensors in a shark’s nose, disorient the swimming beast and steer it away from tourists, swimmers and surfers.
Tasman Rosenfeld, 14, who describes himself as “the inventor of Shark-X,” is a surfer.
“The ampullary glands on a sharks’ nose are electro-receptors,” he told the members of the press. “It’s an inner compass, really, and sharks use it for navigation. Their nose knows where north is.”
Wear one of his Shark-X anklets, Tasman promised, and its subtle magnetic pull will baffle the shark’s sense of direction and steer it away.
“We haven’t tested them on a Great White yet, but they’re incredibly effective on stingrays,” he added. “It’s not going to keep you 10 feet away from a shark, but it’s going to keep you from losing a limb.”
In at least one test, Shark-X has already proved itself a stunning success, besting a sock-monkey purse, gender-specific emergency kits and other inventions, to take first place in the school’s Entrepreneurial Fair.
“We’re trying to tie our curriculum to real-world results, and this is a great example of that,” said Jackie Westerfield, Grandview’s head of school, watching proudly from the edge of the crowd.
Recently, the four entrepreneurs tested Shark-X on some stingrays at what they describe as “an undisclosed location in Miami because it wasn’t pre-approved.”
The stingrays responded dramatically, they reported, opening their mouths wide and changing direction almost immediately.
“It’s like a flashlight shining in your eyes,” Bennett Kubach explained “It’s really irritating, so they want to turn away.” Now they would demonstrate the product on the three nurse sharks that rule in the Sandoway House pool.
“Not a lot of people die from sharks, but a lot lose their arms and stuff,” Alexander Abbasi noted. “Would you like to take that chance?”
As about 50 fathers, mothers and children gathered around the kidney-shaped pool for the morning shark feeding, Valentine Fine, the center’s weekend manager, confirmed Alexander’s assertion.
“Sharks don’t eat people,” he assured the crowd. “They bite us by mistake. So it’s important not to confuse them. Do not pet sharks.”
And they don’t bite us all that often, either, Fine agreed. Last year, he said, there were only 23 shark bites in Florida, and no deaths at all. In an average year, there are only five shark deaths worldwide.
“However, there were 10 last year,” he noted.
The trio of nurse sharks at Sandoway House would not require a bigger boat. They are only about 5 feet long, but frisky and sleek. As Fine dropped shrimp into their mouths, they sucked them in with a startlingly loud popping sound.
“They’ve been around about 400 million years, and they haven’t evolved at all,” Fine marveled.
At last the entrepreneurs were introduced as “the gentlemen of Grandview Preparatory School.”
Tasman Rosenfeld, equipped with a headset microphone, acknowledged the applause.
“I’m the inventor of Shark-
X,” he told the crowd, and delivered a brief discourse on the science behind his invention.
The arm was lowered into the water.
The sharks approached, slid within 2 or 3 feet of the hand, and turned away.
The Shark-X bracelet was removed from the rubber wrist and dropped into a netted pool skimmer.
The skimmer was lowered into the water.
Again the sharks approached and retreated.
A skeptic might wonder if perhaps it was the hand or skimmer that discouraged the sharks, but Tasman’s mother, Janelle Rosenfeld, had no doubts.
“I think it does work,” she said. “Seeing the stingrays’ reaction was amazing, but for me, as a mom, the exciting thing is to see how he was able to take a scientific idea and turn it into a product.”
Her son wants to solve the problems of the world, she said — and make a lot of money so he can be a professional surfer.
Shark-X should sell for about $15-20 apiece, Bennet Kubach estimated. Boyond that, the boys’ marketing plan is still being developed.  They’re in the process of having the name “Shark-X” trademarked, but won’t be able to patent the product because the use of magnets and neoprene is not considered “novel” under current patent law.
“I live right near Nomad’s Surf Shop,” Bennett said, “so I may ask them to carry them.”
He doubted he’d be wearing one much, though.
“I don’t swim a lot, but I like to run on the beach,” he said. “I’m more of a sand person. But I’m proud of what I’ve learned about sharks.”
Albin Engstrom also was pleased with what he’d learned about sharks and magnets.
“I want to become a doctor,” he said, ”but if you have this product, you won’t have to come to the hospital with a shark bite.”
He paused to consider his words.
“But it’s not sharkproof. It’s shark-repellent,” he added.
“It’s not guaranteed.”  ;