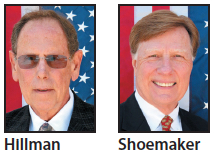 Highland Beach has a new mayor and a new town commissioner. In a short meeting last month, with attendance limited to just 10 people because of the coronavirus threat, departing mayor      Rhoda Zelniker handed the gavel to new Mayor Doug Hillman — but only after it had been cleaned with sanitizing wipes.

Hillman and new commissioner John Shoemaker both took the oath of office during the meeting while Vice Mayor Greg Babij, who was out of town, was sworn in earlier in the day via Skype. All three ran unopposed.

Babij was appointed late last year to fill the seat vacated by former Vice Mayor Alysen Africano-Nila and chose to run again to complete the final year of the seat’s three-year term.

Zelniker, who served for six years — including slightly more than a year as mayor — said she believes the town will be in good hands.

“I am leaving with a happy heart,” she said.