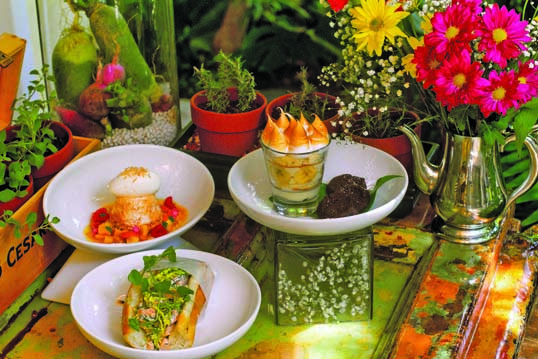 Sure, it’s sweltering outside. But good news can be found in local restaurants where easy-on-the-wallet summer specials abound. Here are some examples:

Delray Beach
75 Main (actually at 270 E. Atlantic Ave., 243-7975 or 266-3687) is offering a three-course prix fixe dinner for $37.99, Monday through Thursday, through September.  The dinner includes a choice of any two items on the dinner menu plus dessert.
If you select from the seasonally inspired prix fixe menu for a three-course dinner for two (Sunday through Thursday) at the Atlantic Grille at the Seagate Hotel (1000 E. Atlantic Ave., Delray Beach, 665-4800) for $33 per person, you also get a bottle of wine. The promotion runs through September. Also new this summer is Blues Night, featuring Orson Whitfield, Andrew Brennan and Joey Gilmore, every Thursday from 8 to 11 p.m.
All-day happy hour (11 a.m.-7 p.m.) is back at Deck 84 (840 E. Atlantic Ave., Delray Beach, 665-8484). The waterside restaurant also features a “five for $10” lunch menu, which includes your choice of one of five lunch entrees and a drink for only $10. New this summer is the launch of a company-wide loyalty program which will earn diners a $30 gift card when they spend $300 at any of restaurant group’s locations: Henry’s, Deck 84, E&J’s Sandwich Shop, Bogart’s Bar & Grille and Burt & Max’s.
A chef’s tasting menu ­— three courses for $35 — is available at 50 Ocean (50 S. Ocean Ave., Delray Beach, 278-3364) from 5 to 7 p.m. Monday through Thursday. In Pineapple Grove at Max’s Harvest (169 N.E. Second Ave., Delray Beach, 381-9970) you can bring your receipt back within 30 days to receive 10 percent off your next meal. Like wine? Go there Monday nights and get 50 percent off. The restaurant has been offering brown bag lunches  ($10-$20) available through the Delivery Dudes (900-7060 or www.deliverdudes.com). Dinner is available for delivery, too. (Lunch is only available through the Delivery Dudes.  Dine-in lunch is not available.)
A summer comfort menu with a twist is a draw at The Office (201 E. Atlantic Ave., Delray Beach, 276-3600). Chef Joe Coletto’s menu provides the option of choosing two courses for $25 (either an appetizer and an entrée, or an entrée and a dessert) or three courses, for $35 (one appetizer, one entrée and one dessert). This menu is available for lunch and dinner, Sunday through Thursday, through Sept. 30. Tax and gratuity are additional. 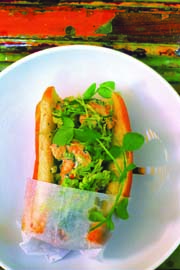 The tropical gardens at Sundy House (106 S. Swinton Ave., Delray Beach, 272-5678) are lovely any time, but summer offers a special treat for diners. They can create their own tasting with “A Taste of Summer.” Just select one item per category. Pick two items for $16 or pick three items for $20.  Starters, main courses and sweets are available. Menus change throughout the season. Garden strolls are always free.
Vic & Angelo’s (290 E. Atlantic Ave. in Delray Beach, 278-9570) has a summer tasting menu where diners may customize their choices. On Sundays through Thursdays (through September), two, three-course Summer Tasting Menus, for $25 and $35 per person, excluding tax and gratuity are available. A bottle of Coastal Vines Pinot Grigio, Chardonnay, Cabernet Sauvignon or Pinot Noir may be added for $15.

Lake Worth
Lake Worth is 100 years old this year, and two restaurants there are offering summer specials to commemorate the anniversary. At Callaro’s (717 Lake Ave., 588-9730) diners will also find a three-course menu for $19.13, with 11 entrees including an 8-ounce strip steak, crab cake and a double-cut pork chop. The menu is available for lunch and dinner.
Couco Pazzo (915 Lake Ave., 585-0320) has a summer prix fixe menu, which is three courses for $19.13. Cafe Boulud Palm Beach at the Brazilian Court Hotel (301 Australian Ave., Palm Beach, 655-6060), is serving up some tantalizing and wallet-friendly dining  deals. Through Labor Day, from noon until 2:30 p.m. Mondays through Fridays, a three-course prix fixe luncheon menu is offered for $20.03, commemorating the restaurant’s opening year, 2003. Three-course prix fixe dinners, also are available at $35 seven nights from 5:30 p.m. until 10 p.m. BYOB Tuesdays are under way until Oct. 7. Bring your own bottles to pair with Executive Chef Jim Leiken’s cuisine. Corkage fees are waived and there is no limit.
Café Boulud Palm Beach also invites diners on a culinary journey to the Mediterranean with the return of its popular pop-up restaurant, Chef Daniel Boulud’s Manhattan-based Boulud Sud. The pop-up operates as a stand-alone restaurant on Café Boulud’s air-conditioned terrace within the fountain courtyard through Sept. 2, for dinner seven days a week. The pop-up will serve à la carte dinner menu daily from 5:30 to 10 p.m., and a three-course prix fixe menu for $35 per person on Saturday and Sunday. 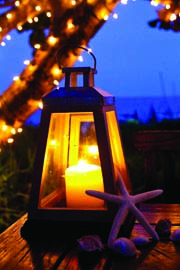 Friday night clam bakes at the Four Seasons Resort (2800 S. Ocean Blvd., 582-2800) are becoming a coastal tradition at the resort’s Atlantic Bar & Grill. Lanterns illuminate tables just steps from the seashore. The menu features a family style traditional clambake including clams, lobster, chicken, Italian sausage, potatoes and corn-on-the-cob and desserts such as s’mores, and strawberry shortcake jars. There is one seating at 7 p.m. Cost is $45 per person ($20 for children 12 and under). Reservations are required.
Sunday family style dinners are served up in another Four Seasons restaurant, Graze. There, Italian- and French-inspired fare meets the local flavors by the pool during family style dinners weekly through September. The menu varies monthly to feature the seasonal ingredients. Cost is $40 per person ($15 for kids 12 and under). Reservations are required (533-3740). 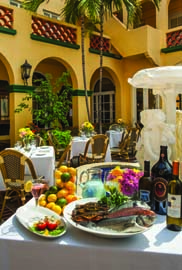 Trevini Ristorante is offering 20 percent off food and beverages through September. Photo provided