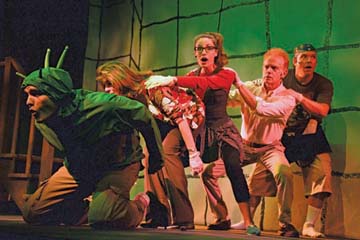 Cast members take the stage in the Arts Garage production of The Trouble With Doug. Photo provided

Seraphic Fire, the Miami-based concert choir with two Grammy nominations to its credit, performs this month at St. Gregory’s Episcopal Church in Boca Raton, wrapping up its third season of regular Palm Beach County performances with a program of African-American spirituals.
And if you haven’t heard this group of singers in Boca yet, you’d better make the concert May 8, because they won’t be back.
Seraphic Fire will not be returning to St. Gregory’s in October, nor will it be appearing anywhere in Palm Beach County for the entire 2014-15 season.
“It was a financial decision more than anything else,” said Joey Quigley, the group’s managing director, and brother of choir founder Patrick Dupré Quigley. The chief reason: Seraphic Fire was unable to get any substantial monetary backing in Palm Beach County.
“We had hoped this could become a new audience for us, and the subscribers we had were very loyal,” Joey Quigley said. “But we weren’t able to get the growth we’d anticipated from the area, or get the donor and government support we get from all our other venues. So Boca became something of a non-starter.”
The choir has tried two other times to establish a Palm Beach County presence, beginning early on with a couple seasons at First Presbyterian Church in Delray Beach, and then a midweek afternoon series at the Harriet Himmel Theater at CityPlace in West Palm Beach, before coming to St. Gregory’s.
“Intellectually, it should work, with the size of the household incomes there,” he said of Palm Beach County. “It should be fertile ground, but it’s not. It’s so strange. It seems to be very closed off.”
With the exception of the New World Symphony, which is an educational academy, and the long-defunct Florida Philharmonic, Seraphic Fire is the only homegrown South Florida classical institution to be nominated for a Grammy award. It was nominated twice in 2012, and you would think that might be enough to win it steady support.
But there is something about the local arts scene that makes it difficult for outsiders. That’s a shame, because it would be difficult to find a higher-caliber homegrown group to boast of here.
The upcoming season’s attractions include collaborations with The Sebastians, a Baroque concert orchestra, and Piffaro, a Renaissance ensemble, and feature Haydn’s Lord Nelson Mass, American composer Kile Smith’s Vespers, and the Arnold Schoenberg-Rainer Riehn reduction of Mahler’s exquisite Das Lied von der Erde.
Other programs include an all-American evening, Vivaldi’s Gloria, Mozart’s Ave Verum Corpus, and the annual candlelight Christmas and Handel’s Messiah concerts. Seraphic Fire will be performing these shows in Broward and Miami-Dade counties, with the closest venue to Palm Beach County being All Saints Episcopal in Fort Lauderdale.
“When we told our Boca subscribers about this, many of them said, ‘Well, I guess I’ll drive 15 minutes more and go to Fort Lauderdale,’ ” Quigley said.
So if you want to see and hear what Palm Beach County just lost, make a date to catch the spirituals program, which is called Steal Away and which is set for 7:30 p.m. May 8, at St. Gregory’s, just behind Mizner Park.  Call 305-285-9060 or visit www.seraphicfire.org, get a ticket, and say farewell.

***
We don’t tend to think of Franz Kafka as a merry sort, given the kind of oppressive, often gloomy fiction he wrote in secret during the 41 years of his tuberculosis-abbreviated life.
But the great Czech writer was a huge fan of the dramatic arts, even to the point of supporting an Eastern European Yiddish theater troupe that performed in Prague during the days when the Zionist movement was in its first flush. So if he were with us today, he might be very happy about one of his stories serving as the inspiration for a musical now playing through May 11 at Delray Beach’s Arts Garage.
The Trouble With Doug, which is getting its first full production here at The Theatre at Arts Garage, draws its basic plot device from Kafka’s story The Metamorphosis, in which Gregor Samsa awakes one morning to find himself transformed into a giant insect. In the musical version by composer Will Aronson and lyricist Daniel Maté, a young computer programmer named Doug Gregory with a loving, almost too-close family, is on the verge of a move from New York to San Francisco when he finds himself turning into a giant slug on the eve of his 27th birthday.
“We took Kafka’s premise of a man becoming something else and we ran with it in our own direction,” Maté said.
Aronson and Maté, who co-wrote the book of the show, said while the original story features a horrified and hostile family that wants the problem with Gregor to disappear, the family in this musical is much more “relatable,” Maté said.
The first versions they wrote of the show, which has been in development for eight years, had a much more alienated family, similar to the story, and the result was a bit too Brecht-Weill for Aronson and Maté.
“When you add music to that, it sounds kind of arch, like it’s a commentary on something,” said Maté, 38, a native of Vancouver who studied psychology at McGill University before entering the graduate musical theater writing program at New York University, where he met Aronson.
“So we decided to neutralize that edge, and create a family that is loveable and is doing their best … and then this transformation happens, and the question of the play is: How is this going to affect the man to whom it’s happening, and how is it going to affect the people around him?”
The five-person cast, directed by Margaret Ledford, includes Clay Cartland as Doug, Barry Tarallo and Patti Gardner as his parents, Shane Tanner as his older brother, Vince, and Alix Paige as his fiancée, Vanessa. Pianist Paul Reekie leads a three-piece band that includes cellist and percussionist Elena Alamilla and reeds player Glenn Rovinelli.
The score by Aronson, a 32-year-old native of Connecticut and a graduate of Harvard, is the product of a young composer whose accomplishments include award-winning musicals in South Korea (My Crazy Girl) and shows for the Barrington (Mass.) Stage Company, and whose pedigree includes a year of Fulbright graduate work in Berlin, where he studied the operatic repertoire.
“Certainly it draws on traditional musical theater to some extent, but I would say it does have a more classical-jazz bent to it,” Aronson said. “All the shows I’ve written so far sound somewhat different — there’s obviously a connective relationship; it’s all by me and my sensibility — but I think with different worlds and different shows, you want them to sound different, you want them to create their own world.”
Both Aronson and Maté are grateful for the support of Lou Tyrrell, the theater’s artistic director, who tried to get The Trouble With Doug for his Florida Stage just before that company went under. Maté, who also is a composer, was at Arts Garage this season with an evening of his songs called The Longing and the Short of It, which was nominated for five Carbonell awards.
Aaronson said his collaboration with Maté works best when the two men feel drawn to the story they’re telling, which is the case with Doug, and with the show they’re working on, an adaptation of the Hansel and Gretel folktale.
“I think both of us tend to do better work when we’re taking risks, which means you have to go outside your comfort zone, which means by definition you can’t be afraid all the time,” he said. “If you’re going to try something that might be crazy and it might be good, sometimes it just might be crazy.”
Shows are scheduled for 7:30 p.m. May 2, 7, 8, and 9; at 8 p.m. May 3; 2 p.m. May 4; and 2:30 p.m. May 10 and 11. Info: 450-6357 or www.artsgarage.org; tickets start at $30.

***
This is the year the United States’ long war residence in Afghanistan is coming to an end, but not much of the culture of that region has seeped into the general consciousness.
Opening this month at the Boca Museum of Art is an exhibit of Afghan war rugs, more than 40 relatively recent creations in which traditional Central Asian design motifs have been altered by new weavers to reflect the region’s decades of armed conflict.
One of the rugs, for instance, resembles the kind of rug familiar from this part of the world in its borders and layout, but most of the center is a portrait of Amanullah Khan, who was king of Afghanistan just after World War I and won the country’s independence from the British. The figure of Khan, resplendent in a green army uniform, is framed by three handguns, two tanks and two helicopters.  Another features a twinned series of repeating tanks in the center, separated by rifles; still another uses tanks on the border and features a map of Afghanistan covered with symbols of war, including cannons, grenades and fighter jets.
It’s somewhat disturbing to see these images depicted on an art form long associated with luxury and painstaking craftsmanship, but surely the works of these anonymous women weavers honestly depict the reality of a nation forever caught in the middle of antagonistic interests. The exhibit, which runs through July 27, is paired with an exhibit of pieces by the American artist Elaine Reichek, who creates needlework that raises feminist and multicultural questions.
Works on display include a sampler from 1992 featuring a Native American couple next to the tree of the Garden of Eden, with a quote from Christopher Columbus above: “Their manners are decorous and praiseworthy.”
Reichek will be on hand at the museum at 4:30 p.m., May 3 for a question-and-answer session about her work, followed at 5 p.m. by a lecture from Annemarie Sawkins, curator of the Afghan exhibit.
Hours are 10 a.m.-5 p.m. Tuesday-Friday, 10 a.m.-9 p.m. Wednesday and noon-5 p.m. Saturday and Sunday. Admission is $14 for adults, $12 for seniors, and $6 for students with ID. Call 392-2500 or visit www.bocamuseum.org.