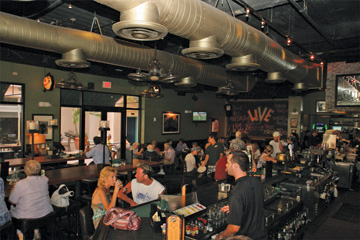 Where to party on St. Patty's Day

If everyone is Irish on St. Patrick’s Day, they might all be in south Palm Beach County. The area’s Irish pubs and bars all are pulling out the stops, and offering up plenty of Irish fare and entertainment throughout the day.

To help you order food and drink properly — and get what you expect — here’s a brief guide:

Shepherd’s pie: We assure you, no shepherds are harmed in the making of this dish. Traditionally, this is a potpie made with leftover meats, vegetables and topped with mashed potatoes. Versions today include ground beef, carrots and peas, and mashed potatoes often topped with cheese and run under a broiler.

Bangers and mash: House-made sausages with mashed potatoes. Like many other dishes on Irish menus, it’s an English favorite, too. These are dinner sausages, fat ones made with pork or beef. They’re called bangers because the original ones made with water to stretch them during lean war years, exploded readily under high heat cooking. They often served with an onion-heavy gravy. It’s considered a ploughman’s lunch favorite, or blue-collar fare, to you Yanks.

Boxty: Ireland’s version of the potato pancake. If there’s a country that knows ways with potatoes, it’s the Emerald Isle. Boxty is something every cook learns as a side dish.

Corned beef and cabbage: Something you rarely find in Ireland, but it’s a big favorite of American Irish and represents their new homeland’s fare. To many, it also means a tasty New England boiled supper. It is what is appears: corned beef slices, with boiled cabbage alongside. Sometimes, it’s accompanied by boiled or mashed potatoes.

Fish and chips: Fried fish and french fries. Typically served up in a cone made of newspaper. You’ll have a harder time finding a real newspaper wrapping than you will getting the food; the combo is common today in most Irish pubs and American ones, too.

White pudding: Part of the traditional Irish breakfast, this pudding is made of oatmeal, pork and pork suet, and bread. It’s typically sliced and fried, and served with eggs and black pudding.

Black pudding: Made with meal and meat blood (pork, beef or sheep), it’s a type of sausage that is grilled, fried or boiled. It’s well known in the County Cork and Clonakilty regions of Ireland — and in the Southern U.S., where it’s called blood sausage.

Guinness: This yeasty stout is often called “bread in a glass.” Rich and sturdy, it warmed the bones in the chill Irish winters. There’s much debate over what temperature to serve it at. You’ll get it cold, or warm or somewhere in between. Nonetheless, ask this way: “Pull a pint, please.” Guinness is never poured, it’s pulled, and traditionally, should take 119 seconds for the perfect pint. You can mess with your bartender on this, but I wouldn’t do it on St. Pat’s Day. Just saying. If you’ve got a real experienced pint-puller, look for a shamrock drawn in the foam. (Harp is the other Irish beer to ask for. It’s a lager. On no account would you on this day order a Bass Ale.)

Where to be Irish

There is a cluster of Irish pubs in the Mizner Park-Royal Palm Place area.

For the top o’ the mornin’ types, hit O’Brian’s Irish Pub in Royal Palm Place. At the former O’Connell’s, “We open at 8 a.m., serving breakfast — corned beef hash and eggs,” said Brian O’Brien, manager. Expect First Street to be closed off for the two circus tents they put up to hold the Irish dancers, bagpipers, leprechauns, live bands and assorted other entertainers.

“The Downtown Grill will be providing the food for the day. We’ll have corned beef and cabbage, shepherd’s pie, fish and chips and Irish stew. And of course, there will be several beer trucks.” It’s free admission and goes from 11 a.m. to 2 p.m.

At the Wishing Well Irish Pub, also in Royal Palm Place, live bands are on stage all day, starting around 11 a.m. Five bars pulling plenty of Guinness will be set up around the tent in the parking lot in front of the pub, and corned beef and cabbage, corned beef sandwiches and shepherd’s pie will be on the day’s menu. Bagpipers, an Irish dance troupe and entertainers will perform in the tent. The fun here runs to 2 a.m. 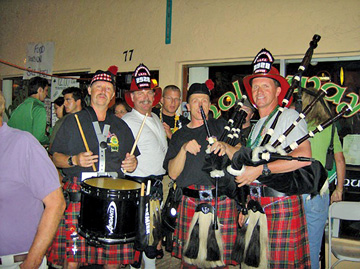 Pipers get in the spirit at Holloway’s Pub in Boca Raton.

Holloway’s Irish Pub will have a tent in the parking lot to spread out under. Walt Rooney will provide Irish music inside, with several other bands set up outdoors. Bagpipers and Irish dancers are expected to drop in. On their menu are shepherd’s pie, Irish stew, corned beef and cabbage, and corned beef sandwiches. Expect plenty of beer as well. The action is from 11 a.m. to 2 a.m.

Over in Mizner Park, the Dubliner will use the next-door courtyard and area in front of the pub for serving food to go with all the flowing beer, according to co-owner Scott Frielich. “We’ll have an Irish buffet, with corned beef and cabbage, shepherd’s pie, bangers and mash, and a roasted beet salad. It’s too crazy and too crowded to try to get servers through, so we just have the buffet on St. Pat’s Day,” he said. 150 extra seats have been arranged.

Entertainers include face-painters for the kids and Carl the balloon artist, who fashions balloons into such creations as leprechauns with dogs or umbrellas upon request, he said. “Walt Rooney is an Irish folk singer. He plays from 11 to 3 (p.m.), then the Straw Hat Pickers — kind of Southern spin on Irish with dueling fiddlers — perform. Someday Radio is the U-2 tribute band that is the headliner at 9 till close,” he said. A strolling fiddler, bag pipers and Irish dance groups from local schools will perform. The all day celebration is from 11 a.m. to 2 a.m.

Sláinte (say “slancha”) in Boynton Beach will party all over the parking lot and inside the Irish bar and restaurant. They open at 8 a.m. with a hearty Irish breakfast served, and continue throughout the day, serving a mix of both Irish and American favorites. Indoors, they’ll have bangers and mash, and shepherd’s pie; outdoors, burgers and sandwiches are on the menu.

Bands indoors include Kilbillies and BJ Irish; outdoors, the popular local band Evil Monkeys headlines, with Francine wrapping up the night’s entertainment. Other entertainers, not on any schedule, may show up, a restaurant representative said. The beer flows till 2 a.m.

You can start your day with a traditional Irish breakfast, including black or white pudding, at Tim Finnegan’s Irish Pub in Delray Beach. Eggs, fried tomatoes and mushrooms also are served. Stick around for the corned beef and cabbage or corned beef sandwiches, and manager Tom Regan says there also will be green beer, “of course!”

Stay to listen to Gerry Carney, who happens to have a hit single on the Irish music charts in Ireland. “He’s flying in to sing here,” Regan said. The Black Pearl bagpipers also will come to play, and the Irish dancers from local dance schools will make a stop here as well.

At O’Connor’s in Delray Beach, the party actually starts early on March 12, after the St. Patrick’s Day parade. The tent outdoors will serve beer and food inside includes corned beef sandwiches and plenty of Guinness.

Brogue’s on the Avenue in Lake Worth will take their party to the streets, specifically K Street alongside the restaurant, following the annual St. Patrick’s Day parade on the avenue. Their private Banshee Room will be open to serve the food that includes corned beef and cabbage, bangers and mash, fish and chips and more.

They open early and will serve a traditional Irish breakfast. White pudding, black pudding, eggs, Irish sausage, Irish bacon, tomatoes and potatoes are on that menu.