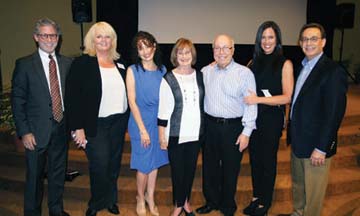 A moving and powerful documentary about temple member Michelle Brandfon’s family’s experience highlighted the monthly series. Titled ‘No Place on Earth,’ the film shares the story of Jews ages 2 to 78 who survived the Holocaust by going underground and living in caves in the Ukraine. Brandfon, a descendent of the families portrayed in the film, and the film’s producer, Susan Barnett, participated in a question-and-answer session with the 500 attendees. Sharon Wagman, Congregation B’nai Israel’s executive director, said many tears were shed during the screening. ABOVE: Gary Weiner, Wagman, Barnett, Claire and William Kalman, Brandfon and Rabbi Robert Silvers. Photo provided