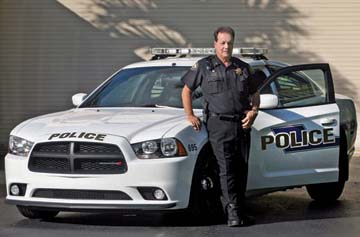 after 30 years of public service. 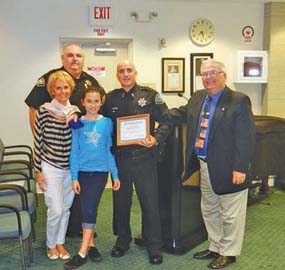 displays his life-saver medal with (from left)

The South Palm Beach Police Department is quietly going through an unprecedented overhaul after the recent departures of two of the most experienced officers in the town’s history.
In November, police Chief Roger Crane retired after 28 years with the department, including nearly two decades as its leader.
Then in December, Lt. Nick Alvaro retired after a 30-year career in law enforcement, 13 of them in South Palm Beach.
Alvaro was one of the department’s most versatile contributors. Besides serving as a road patrol supervisor, he was a certified fire inspector and evidence specialist. Members of the Town Council might have appreciated him most, however, as a grant writer who helped secure tens of thousands of dollars in subsidies for the town.
“Through his diligence and his grant writing, most of it done on his own time, we’ve probably obtained between $70,000 and $80,000 worth of police equipment over the years,” said Vice Mayor Joseph Flagello. “He is a lieutenant who gets the job done with no fanfare, and he will be sorely missed.”
With two vacant positions in the eight-officer department, Town Manager Rex Taylor and acting Chief Carl Webb are busy screening candidates to hire. Taylor says they have some promising prospects, and he thinks they’ll be able to fill the openings relatively soon.

Honoring one of its own
At its Dec. 17 meeting, the Town Council acknowledged the fine performance of another of its officers.
Patrol officer Jason LaForte was making his rounds not long before dawn on a November morning when he noticed a resident having a medical emergency in a condominium parking lot. LaForte quickly assisted the elderly man and summoned help.
“We’re a quiet force,  but every once in a while, something comes up,” Webb said.
The chief said the resident was able to survive the incident only because of LaForte’s alertness and fast response.
“His direct action saved the life of one of our residents,” Webb said. “Without that, it’s guaranteed that resident wouldn’t be here today. What a great job.”
LaForte, 41, is a 14-year veteran with the department. The town honored him with a life-saver medal and plaque.
“I’m happy I was there to help him,” LaForte said. “I feel good that he made it all right and he’s still around to be with his family.”
In other business, the council voted unanimously (4-0, with Councilwoman Stella Gaddy Jordan absent because of illness) to send $1,000 to the town of Lantana to help defray the cost of the fireworks display during December’s Lantana bridge opening. “The fireworks were spectacular,” said Councilman Robert Gottlieb. “All our residents enjoyed them.”